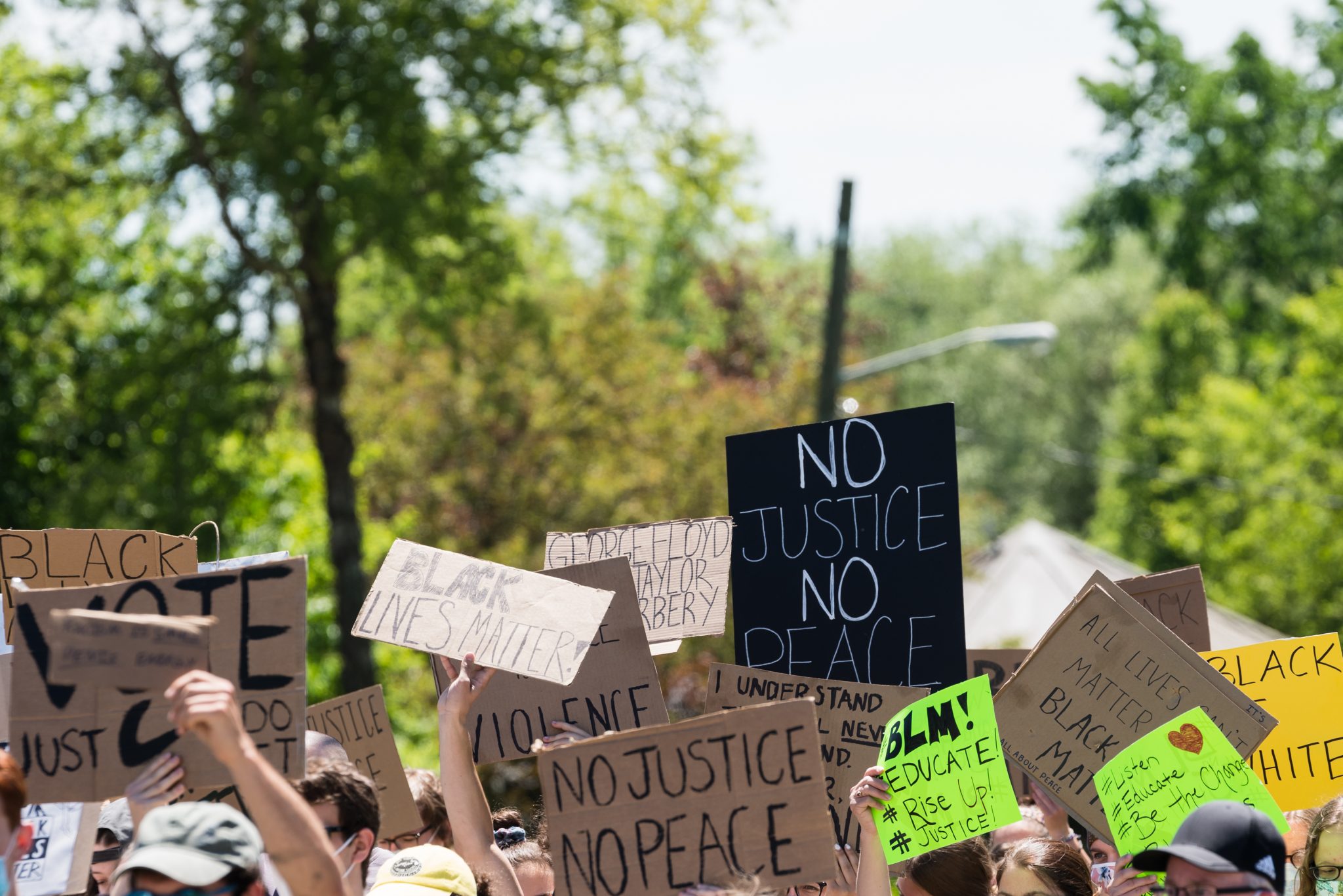 George Floyd’s tragic death in police custody demands a return to individualism and the ideals that promote the inherent worth of every human being regardless of skin color. Unfortunately, the backlash on the collectivist Left has been quite the opposite. Calls for abolishing the police, racially segregated “no-cop zones,” and disastrous violence and looting are all seemingly justified reactions to real or perceived racism. This kind of behavior is justified by arguments that elevate a person’s collective identity over individual character and actions. This should not be surprising, as it is in the nature of identity politics to revert to violence and intimidation to achieve its ends. But we should not lose hope. A return to individualism and a rejection of collectivism is a better approach to easing racial tensions.

Modern identity politics does not merely claim that it is in the interests of certain racial or ethnic groups to coalesce around particular policy proposals or social concerns, but that one’s immutable characteristics are what should define the worth of a person above all else. This, its proponents argue, is because every person, no matter what his or her individual character or beliefs or prejudices may be, occupies a rung of the oppressed or oppressor hierarchy. If you are a straight white male, you are an oppressor no matter what. If you are a gay, black woman you are oppressed no matter what. Individual circumstances are absolved, instead allowing one’s membership in a certain racial or sexual or class collective to take precedent over individual experience.

Feminist philosopher Joanna Williams put it well when she defined identity politics as “defining ourselves based on the most biological, the most boring aspects of our identity and not being able to move beyond. This is not transformational; this is limiting.” Identity politics may have started out as a seemingly innocuous movement to include the personal experiences of people from marginalized communities in our political discourse. But it has become a dangerous, collectivist movement, which, when carried to its logical conclusion, justifies the kind of violence and atrocities that destroy societies and harm the very communities they claim to help.

On the Joe Rogan Show, Jordan Peterson, a Canadian professor of psychology known for his book 12 Rules for Life, warned of how authoritarian regimes have exploited racial or class identity to pit collectives against each other. The Soviet Union, he said, “Started categorizing everybody according to their ethnic or sexual or racial identity and then made that the canonical element of their being.” This is, he added, “murderous pushed to its extreme.”

The insurmountable problem with the philosophy behind identity politics is that if someone is merely the sum of the collective identities — usually race or gender or class — they inhabit, there is no way to disagree with him or her on an individual level without pronouncing shame on who he or she is as a part of a certain collective group. Identity politics excludes rational discourse and debate from politics, allowing the most radical ideas to gain ground with no substantial opposition. Whether it’s defunding the police, looting black small businesses, or creating an “autonomous” tyranny in the middle of America, our climate of identity politics is making rational decision-making and problem-solving impossible. As Ben Shapiro pointed out in a talk for Young America’s Foundation, “Freedom is predicated on the idea that we can discuss with one another without relying on identity as the trump card. Once identity becomes the trump card, how the hell are we going to have a conversation?”

The answer is that we can’t. Violence fills our streets while spineless leaders refuse to stand up against it. Collectivists have taken control of the narrative. And they are weaponizing identity politics to hijack true equality and destroy individual rights.

Pointing out the inevitably violent culmination of identity politics is not mere fear-mongering. We are seeing these consequences played our on our streets daily. Police officers are threatened, assaulted, or even killed, and business owners defending their businesses are brutally beaten. Buildings and businesses are looted and burned seemingly at random, and stores that carry necessary goods for people in no way at fault for Floyd’s death or any other racist atrocity are forced to bear the consequences. Affordable housing units are burned down. This all carried out in the name of bringing down a society that is supposedly hopelessly and endemically oppressive.

But if you decry this senseless violence and destruction? Well, you’re part of the problem. “No justice, no peace,” protesters cry. No matter that those committing the injustice are almost never the ones suffering from the destruction of their peace (or livelihoods, or even lives). Society is at fault. America is at fault. Police are at fault. “Whiteness” is at fault. Therefore, everything must go.

Minneapolis Councilwoman Lisa Bender exemplified this collectivist and dehumanizing way of thinking when she rebuked Americans worried that “abolishing” the police would leave them defenseless to crime, She said that such a fear was obviously “coming from a place of privilege.”

If, as a supposed member of an oppressed collective, you disagree with the normalized groupthink, you are a threat to their world order — or world disorder. As Joe Biden admitted, if you don’t vote “our” way, “you ain’t black.” “Blackness” or “whiteness,” is relegated to the status of a character trait instead of being treated as mere melanin count, and certainly not the basis by which your future or worth should be decided. This is why conservative Supreme Court Justice Clarence Thomas is, according to a 1991 opinion piece in the Washington Post, “estranged from his ‘blackness.’” How can a man be estranged from his own skin color, you ask? Because it’s more than a skin color, radical collectivists believe — it’s a part of you as a person more than almost anything else.

Now, more than ever, classical liberals and conservatives must unite to reclaim Martin Luther King Jr.’s dream of a day when his grandchildren would “not be judged by the color of their skin, but on the strength of their character.” We must, like Frederick Douglass demanded we do more than 100 years ago, strive for the promise of liberty and justice for all to be realized for Americans of every race. As Douglass put it,

I have said that the Declaration of Independence is the ring-bolt to the chain of your nation’s destiny; so, indeed, I regard it. The principles contained in that instrument are saving principles. Stand by those principles, be true to them on all occasions, in all places, against all foes, and at whatever cost.

An ideology that treats skin color or gender or class as a more important determinant of someone’s worth than his individual character goes directly against the ideals of our founding fathers and those of many civil rights leaders. Americans must reject this ideology, striving for racial peace and justice without resorting to violence, self-destruction, or dangerous collectivist identity politics.