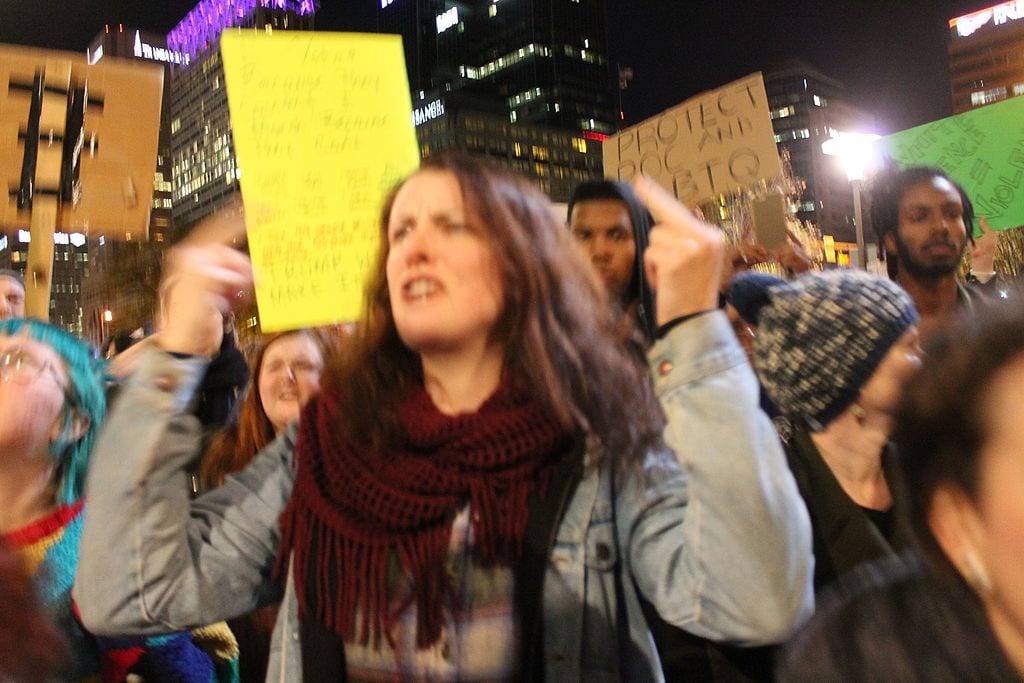 Does anyone remember “GamerGate”? In October 2014, a friend named Beth Haper urged me to pay more attention to the controversy that erupted over accusations of unethical favoritism by journalists covering the videogame industry. “Stacy, you need to talk to Adam Baldwin about this,” Beth told me, and I immediately called the actor, whom I’d met a few years earlier in California while visiting his friend Andrew Breitbart. Over the phone, Baldwin explained that “GamerGate” had awakened videogame enthusiasts to the menace that feminists and other “social justice warriors” (SJWs) posed to their pastime. Because I was then working on a book about radical feminism, this was of interest to me and I began paying closer attention to “GamerGate” with the eventual result that in February 2016 my popular @rsmccain account was banned from Twitter. Although no one at Twitter would ever explain exactly why I was banned (a company spokesman told Debra Saunders that “privacy” concerns prevented such an explanation), many observers noted that I was banned shortly after feminist ideologue Anita Sarkeesian, a key figure in the “GameGate” controversy, was announced as a member of Twitter’s “Trust & Safety Council.”

No less an authority than feminist author Amanda Marcotte has claimed that understanding “GamerGate” is crucial to explaining how Donald Trump was elected president and, while my views are diametrically opposed to Marcotte’s, I cannot deny the possibility she is correct about this, although perhaps not in the way she intends. What happened in “GamerGate,” from my perspective, is that the Left exploited the political prejudices of liberal journalists in order to redefine disagreement as “hate,” and to prohibit criticism as “harassment.” In the three years since I was banned from Twitter, the use of these tactics to silence conservative voices online — to “de-platform” and “de-monetize” the Left’s opponents — has escalated to the point that some have suggested anti-trust regulation be invoked against companies like Twitter, Facebook and Google. Beyond the First Amendment issues concerning online free speech, however, the Left’s increasingly common tactic of smearing their enemies with the “hate” label has important ramifications for every sphere of public-policy debate.

However crazy the Left might be, they are not stupid, and what they have done in recent years can be described as a deliberate effort to shift the so-called “Overton Window.” This refers to a concept developed by the late free-market advocate Joseph P. Overton, describing how the limits of “acceptable” public discourse are defined. Because voters are apt to reject any policy that is considered “radical” or “extreme,” advocates of innovative policies are unlikely to see their ideas enacted if politicians fear that this would cost them re-election by voters who reject these changes as too drastic. Therefore, advocates of change must first persuade the public that the proposed policy is within the “mainstream” of acceptable opinion. Overton worked at the Mackinac Center for Public Policy, whose president Joseph Lehman says: “Generally speaking, policy change follows political change, which itself follows social change. The most durable policy changes are those that are undergirded by strong social movements.”

Democrats took alarm at Donald Trump’s 2016 upset victory over Hillary Clinton because it demonstrated the falsehood of their belief that they were “on the right side of history.” If Republicans could win with a candidate as seemingly “extreme” as Trump, this suggested that Democrats had not only failed to shift the Overton Window permanently leftward, but also that a post-Obama backlash had shifted the range of acceptable policy to the right. From this fearful reaction — remember how the Yale University campus was traumatized by Trump’s victory? — emerged the delirious accusations that “fascism” had arrived in America, and that violent far-right “hate” was surging nationwide. Such alarmist rhetoric had many effects, inspiring left-wing “Antifa” radicals to riot whenever conservative speakers came to university campuses, to assault Trump supporters at rallies, and to mob Republican officials in restaurants. The climate of fear orchestrated by Democrats and their media allies also inspired bogus “hate crime” hoaxes, like the one perpetrated by Jussie Smollett in Chicago.

We must be clear about what the Left aims to accomplish by these tactics. The Overton Window can be shifted not only by persuading the public that policy proposals hitherto regarded as extreme are now “acceptable,” but also by convincing people that opposition to such policies is unacceptable. If the Left can succeed in depicting its opponents as “radical” or “extremist” — discrediting conservatives as hateful bigots — then it becomes easier for Democrats to advance left-wing policies. This is why, as the 2020 presidential primary field begins to take shape, we see so many Democratic hopefuls rushing to endorse far-fetched proposals like the “Green New Deal,” “Medicare for all,” universal “free” college education and voting “rights” for illegal immigrants. These candidates apparently believe that Trump is so unpopular as a symbol of extreme “right-wing” policy that voters will eagerly embrace outright socialism as an alternative. Democrats believe “Love Trumps Hate,” to quote a slogan frequently seen on T-shirts and protest signs at the Women’s March, and this belief is predicated on their success in defining conservatives as proponents of “hate.”

Consider the recent effort by Media Matters to smear Tucker Carlson by mining the audio archives of Carlson’s radio appearances with “Bubba the Love Sponge.” Supposedly, things said on a shock-jock program 10 years ago are proof that Carlson is guilty of hate or, more specifically, “white nationalist rhetoric.” That label is how Media Matters characterizes comments about a variety of subjects ranging from the Iraq War to the Congressional Black Caucus despite the fact that at the same time, Carlson disavowed the identity-politics use of racial categories. The Media Matters hit-job on Carlson was written by a 24-year-old Oberlin College alumna, Madeline Peltz, who in December asserted that Carlson’s advertisers are “sponsoring fascism” and she is also the author of an article headlined, “Tucker Carlson’s descent into white supremacy: A timeline.”

Carlson hosts the 8 p.m. hour on the Number One cable-news channel in America. His nightly audience is more than 3 million viewers, more than twice as large as Anderson Cooper’s audience on CNN. Is Carlson blinking secret racist messages in Morse code? Or is Ms. Peltz able to detect what she calls his “full-throated white supremacy” because Oberlin trains its students with supersensory mindreading skills for recognizing “fascism”? No, Carlson is merely offering conservative commentary on politics and current events, and Ms. Peltz is labeling these comments “white nationalism” because … Well, because that’s what she gets paid to do. Years ago, Media Matters declared “war” on Fox News, and Ms. Peltz is a young soldier in that left-wing army, following orders, listening to hundreds of hours of decade-old audio from “Bubba the Love Sponge” episodes in search of proof of the predetermined conclusion that Tucker Carlson is a racist.

Disagreement with the Left is being redefined as “hate,” and practically any conservative commentator could be smeared the way Media Matters has smeared Tucker Carlson. The purpose of this tactic is to stigmatize anyone associated with the Republican Party as “outside the mainstream,” to silence the most effective and popular critics of the Democrats in advance of the 2020 presidential campaign. If this tactic succeeds, it won’t matter how ill-qualified the candidate Democrats nominate or how crazy their policy ideas might be. By smearing and/or silencing their opponents, the Left seeks to shift the Overton Window by making it unacceptable to vote for President Trump’s election.

In 2016, nearly 63 million Americans voted for Trump, and polls indicate that the president remains overwhelmingly popular with Republican voters. Very few of them are apt to be influenced by the Left’s smears, and the Democrats’ media allies aren’t much help. It’s not just that CNN’s ratings consistently trail Fox News, but CNN is often rated lower than the Hallmark Channel or Nickelodeon. Because the Left can’t win in the marketplace of ideas, they are attempting to shut down their critics, to label opponents “fascists” or “white supremacists,” to exercise totalitarian control over public discourse in the same way left-wing professors and student “Antifa” mobs now control university campuses. Tucker Carlson understands this, and his response to the Left’s smear tactics has been to call them out by name and expose them in front of his 3 million viewers. He’s winning, and I’d say this is driving his enemies crazy, but the Left has never been entirely sane.