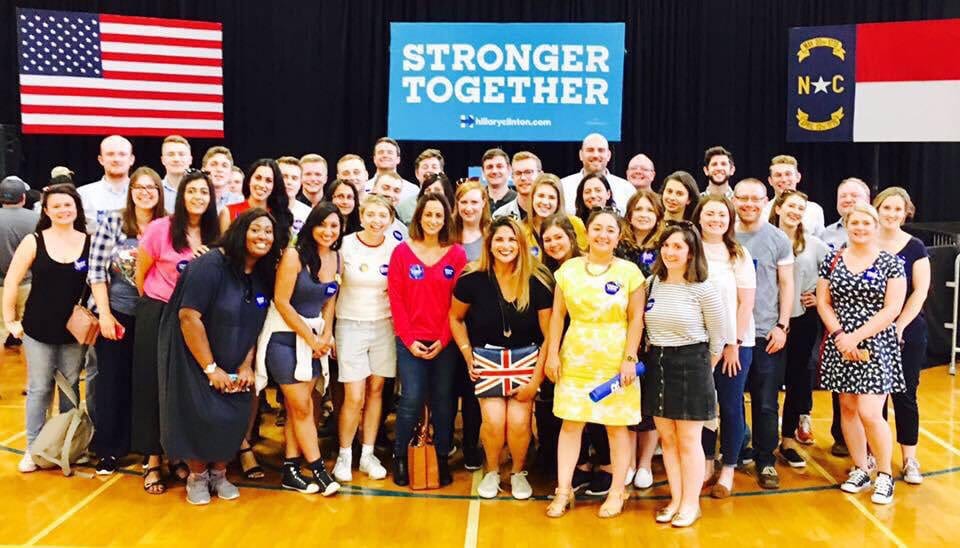 It was more than the Russians.

Amid the news that Special Counsel Robert Mueller has indicted 13 Russians charged with trying to influence an American election? The American Spectator has been tipped to a damning article published in Buzzfeed UK two days before the 2016 election. An article that documents in detail a stunning fact. The BuzzFeed UK headline:

In what the Mueller indictments clearly state is a violation of U.S. law, the Hillary Clinton campaign was specifically inviting “at least 70 British Labour activists” to campaign for Clinton in Charlotte, North Carolina. And North Carolina wasn’t the only swing state of the 2016 campaign to get visits from British Leftists at the behest of the Clinton campaign.

But first, let’s recall the exact words from the recent indictment of 13 Russians by Special Counsel Robert Mueller. Right off the bat, in the very first paragraph, the indictment says (bold print supplied) this:

The United States of America, through its departments and agencies, regulates the activities of foreign individuals and entities in and affecting the United States in order to prevent, disclose, and counteract improper foreign influence on U.S. elections and on the U.S. political system. U.S. law bans foreign nationals from making certain expenditures or financial disbursements for the purposing of influencing federal elections. U.S. law also bars agents of any foreign entity from engaging in political activities within the United States without first registering with the Attorney General. And U.S. law requires certain foreign nationals seeking entry to the United States to obtain a visa by providing truthful and accurate information to the government. Various federal agencies, including the Federal Election Commission, the U.S. Department of Justice, and the U.S. Department of State, are charged with enforcing these laws.

If you live in a swing state in the US, don’t be surprised if you encounter a volunteer with a British accent trying to convince you to vote for Hillary Clinton.

At least 70 British Labour activists have swarmed the city of Charlotte in North Carolina after answering the call from a local Clinton organiser, while officials from the British GMB trade union have been out campaigning in Philadelphia and other volunteers from the UK are spread out across key swing states such as Ohio and Wisconsin.

All of them are using up their vacation time and paying for their own airfare in order to spend weeks trying to influence an election in another country — and emphasise just how much this vote matters to the rest of the world.

“We’re all in Charlotte and it does feel like we’ve definitely increased their capacity,” said Jen Thornton, who normally works in the office of Jo Stevens MP, the shadow secretary of state for Wales, and is one of dozens of British volunteers campaigning for Clinton in the city. “We’re all connected and have worked for Stronger In or for Labour MPs. Some are councillors.”

… Most of the British volunteers on the Clinton campaign are Labour activists who witnessed the party’s 2015 general election defeat and then found themselves on the losing side in this year’s referendum on the UK’s membership of the EU.

… Efforts by BuzzFeed News to track down any British volunteers working on the Trump campaign proved futile.

In other words? In other words what BuzzFeed UK was reporting two days before the election was that in direct violation of U.S. laws — the very same laws for which 13 Russians and some Russian entities have now been indicted — the Clinton campaign was quite openly colluding with what the indictment refers to as “foreign individuals” and “foreign nationals” to exert what the indictment specifically refers to as “improper foreign influence on U.S. elections and on the U.S.political system.”

As the article also reveals, these “foreign individuals” and “foreign nationals” were dispatched by the Clinton campaign to, at a minimum, the key swing states of North Carolina, Pennsylvania, Ohio, and Wisconsin. Clinton lost these states by the following margins:

Would her losses in these key states have been greater without the interference of these foreign nationals — interference that came at the specific invitation of the Clinton campaign? We will never know.

What we know for certain is that by the definition provided in the Mueller indictments of foreign nationals who were Russian, the Clinton campaign was willfully and deliberately colluding with another set of foreign nationals — British Labor Party activists — to win the U.S. presidential election.

The Mueller indictments also say this of the involvement of foreign nationals. Bold print supplied:

From, in or around 2014, Defendants knowingly and intentionally conspired with each other (and with persons known and unknown to the Grand Jury) to defraud the United States by impairing, obstructing, and defeating the lawful functions of the government through fraud and deceit for the purpose of interfering with the U.S. political and electoral processes, including the presidential election of 2016.

Brazenly, the Clinton campaign made no attempt to conceal its British collusion. The BuzzFeed UK article features a group photograph of Clinton campaigners from Britain in what appears to be a local Charlotte gymnasium, the group of British colluders posed in front of the American and North Carolina state flags. The woman in the center is holding — the British Union Jack.

Indeed, Count One of the Mueller indictment of the Russians says that they:

… knowingly and intentionally conspired to defraud the United States by impairing, obstructing, and defeating the lawful functions of the Federal Election Commission, the U.S. Department of Justice, and the U.S. Department of State in administering federal requirements for disclosure of foreign involvement in certain domestic activities.

There is no indication in the BuzzFeedUK article that the Obama State or Justice departments, run by Secretary of State John Kerry and Attorney General Loretta Lynch, made any attempt to forbid, much less prosecute, the British foreign nationals for their quite open “foreign involvement in certain domestic activities.” Nor, apparently, was any investigation opened of the very much on-the-record colluding with foreign nationals by the Clinton campaign.

Count One, Section (e) of the Mueller indictment says the Russian defendants interfered “with the stated goal of spread[ing] distrust towards the candidates…” in the U.S. election. BuffFeedUK specifically cites one British activist, identified as “Jen Thornton, who normally works in the office of Jo Stevens MP, the shadow secretary of state for Wales,” as saying of candidate Donald Trump that Trump is “a person with anti-woman, anti-foreign views”— which is to say she was spreading “distrust” towards a candidate in direct violation of U.S. law.

Tellingly, if one clicks on the group photograph of the Labor Party activists, it takes one here to the Twitter site of one of the Labor activists mentioned in the article — Jen Thornton. The photo is accompanied by a tweet from Thornton that reads:

The British have arrived in North Carolina to campaign for @HillaryClinton #ImWithHer pic.twitter.com/a6sFS8M3gd

And when one scrolls down the comment section one finds this telling comment from a presumably British commenter. It reads:

Google the name Pearleen Sangha and one finds this. Ms. Sangha, described as a “Policy And Budget Analyst” for San Jose, California Mayor Sam Liccardo, a Democrat. She also lists herself as the Mayor’s campaign manager. At this link for Ms. Sangha  on the official website of the Mayor, one finds this short biography, bold print supplied:

Pearl was born in England and raised in Santa Cruz County. Her family moved to the U.S. when her Dad started working in Silicon Valley. She moved back to the UK, spending time in Wales, where she graduated with honors in International Relations from Swansea University. Pearl went on to work for UK Parliament and then the Labour Party. Collectively, she spent almost a decade in the UK, working on national election campaigns. She came back to California in 2016, did a small stint as a Field Director for the Clinton Campaign, and joined Team Liccardo in San Jose in March of 2017.

Which is to say, if one adds the “huge respect & well done to @PearleenSangha for organising” that is found in the comment section of Labor activist Jen Thornton’s Twitter account, add in that Sangha herself is a native Brit who, according to her own bio, “went on to work for UK Parliament and then the Labour Party” and in 2016 arrived back in the U.S. in time to have worked in a “small stint as a Field Director for the Clinton Campaign” the collusion is right there to see.

Add this to something said by House Intelligence Chairman Devin Nunes the other day to Fox’s Maria Bartiromo:

“The collusion is right in front of our eyes. Just because you hire a lawyer who hires a firm who hires a former British spy to make contacts with Russians — that means that you were colluding with the Russians.”

Which is to say, not only was the Clinton campaign colluding with the Russians — it was colluding with British Labour Party activists as well. In the latter case boasting to the media — BuzzFeed UK — that it had placed foreign nationals in at least four swing states — North Carolina, Pennsylvania, Ohio and Wisconsin — to actively and openly campaign for Clinton.

In what the Mueller indictment says is an outright violation of the law.

Over to you, Mr. Mueller.

And to you, Chairman Nunes.