It started last Oct. 6, when an adjunct instructor at Hamline University in St. Paul, Minnesota, showed the students in her online course on “World Art” two Islamic works containing images of Muhammad. One Muslim student complained to the professor, and then to administrators, that it was “Islamophobic” to show these works in class. Before long, on the basis of this single complaint, the administrators had cut the teacher loose and were publicly bad-mouthing her.

In an article about the case that appeared here on Jan. 5, shortly after the story went public, I wrote that the fired educator, whose name had thus far been kept out of the media, appeared from online course listings to be one Erika López Prater. Why hadn’t she come forward? Was she worried that the notoriety would damage her career? In my article’s closing paragraph, I urged her to speak up: “You’re a serious but criminally underpaid educator who’s been outrageously wronged by fatuous, cowardly administrators who are lavishly compensated for enforcing identity-group despotism. The blow they’ve struck against free speech and liberal education can’t be allowed to stand.”

I was far from alone in writing about the Hamline case. It made headlines worldwide. On Jan. 8, the New York Times ran its own big, splashy piece. Although the Gray Lady these days is more PC than ever, its article treated the professor sympathetically, noting that “several Islamic art scholars” found nothing offensive about her actions. It was in the Times article that the identity of the professor was confirmed for the first time. As I had surmised, she is Erika López Prater. And now, to my delight, she’s struck back at the Hamline halfwits in a big way — namely, with a lawsuit in which she’s suing the college’s trustees on seven counts: religious discrimination, reprisal, breach of contract, promissory estoppel (reneging on a job offer), defamation, intentional infliction of emotional distress, and violation of Minnesota’s Whistleblower Act.

The complaint, which is available online, points out that López Prater’s course syllabus warned that she would “introduce students to several religious traditions,” which meant viewing “depictions of holy figures (for example, the Prophet Muhammad, Jesus Christ, and the Buddha).” Students with “questions or concerns” were invited to contact her and to skip class for the day if they had religious objections to viewing such images. Both López Prater’s department head, Allison Baker, and university administrators approved of the syllabus and were fine with displaying images of Muhammad. Indeed, Baker was so satisfied with López Prater that on Sept. 21, she invited her to return in the spring, writing in an email that students had said “nothing but wonderful things” about her teaching.

Then came the fateful day. López Prater showed her students the 14th-century Persian painting The Prophet Muhammad Receiving Revelation from the Angel Gabriel and the 16th-century Turkish painting Muhammad, Shown with a Veiled Face and Halo, at Mount Hira. The class would have passed without incident if not for that one student, Aram Wedatalla, whose “outrage” over the two artworks was treated respectfully by López Prater, who “explained the educational purpose for displaying the images.” Wedatalla, who also happened to be president of Hamline’s Muslim Student Association, was not satisfied by that explanation. 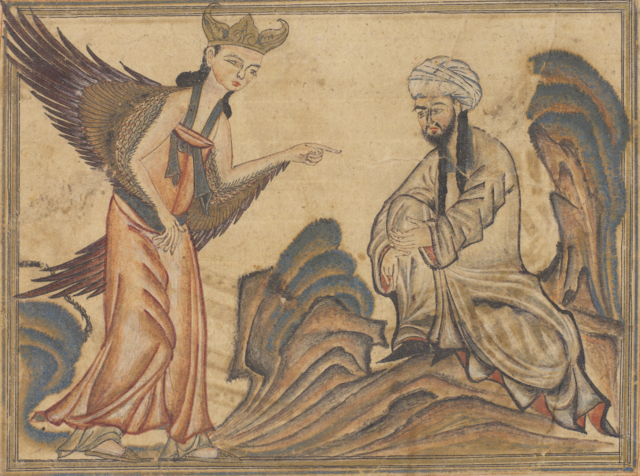 Nor was she mollified by the fact that she could have skipped that day’s class. On the contrary, she “was enraged that López Prater showed the images at all, to anyone.” In short, as the complaint puts it: “By her statements and actions, Wedatalla wanted to impose her specific religious views on López Prater, non-Muslim students, and Muslim students who did not object to images for the Prophet Muhammad — a privilege granted to no other religion or religious belief at Hamline.”

The complaint goes on to detail the numerous ways in which people at Hamline proceeded to appease Wedatalla. At Baker’s suggestion, López Prater sent Wedatalla a written apology for having caused her discomfort. After telling López Prater that “a Muslim person had described López Prater’s actions as ‘shitting on Islam’” and that “Muslim staff were threatening to resign,” Dean of Liberal Arts Marcela Kostihova “recommended that López Prater apologize in class.” López Prater did so. But to no avail. Baker withdrew the offer for a spring course. 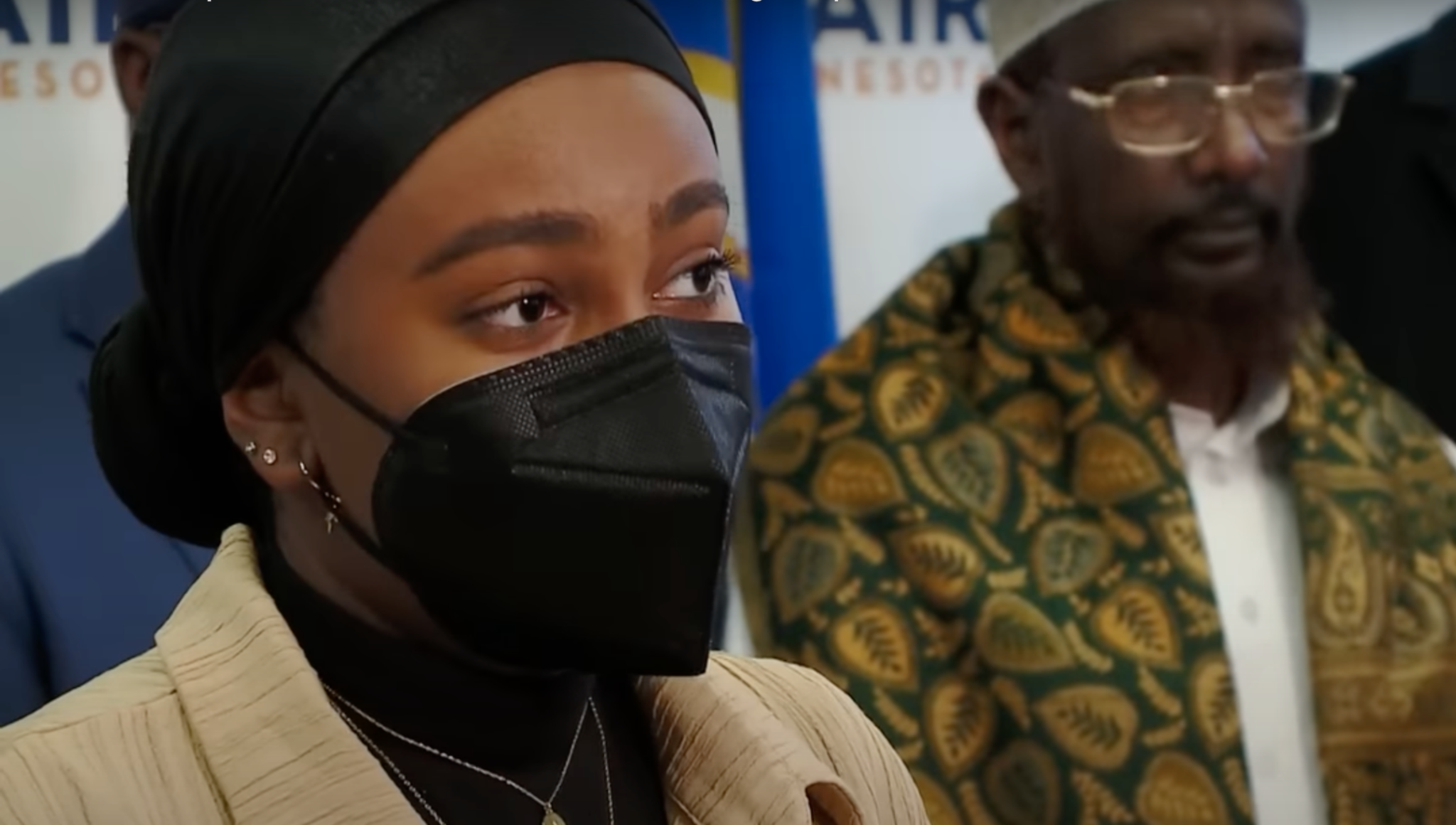 Aram Wedatalla, the Hamline University student who complained about the image (NBC News/YouTube)

López Prater resolved to “leave Hamline quietly” at the end of the term. But the appeasement of Wedatalla — and the maligning of López Prater — persisted. In a mass email, David Everett, “associate vice president of inclusive excellence,” described López Prater’s actions on Oct. 8 as “inconsiderate, disrespectful and Islamophobic.” An article in the school newspaper, The Oracle, quoted this statement as well as Dean of Students Patti Kersten’s charge that López Prater had committed “an act of intolerance.” Meanwhile, López Prater’s colleagues distanced themselves from her, with one exception: Mark Berkson, a religion professor, defended her in a letter to The Oracle — an action for which Hamline officials chastised him. (The editors of The Oracle soon took his letter down because, they said, it had caused “harm.”)

Stepping up the persecution, Everett hosted what amounted to a “Two Minutes Hate” devoted to López Prater’s offense. Appearing at his invitation was Jaylani Hussein of the Council of American-Islamic Relations (CAIR), who called López Prater “Islamophobic.” When Berkson challenged him on this, “Baker and Everett placed their hands on his shoulders and told him to stop” and Hussein angrily equated López Prater’s actions with pedophilia, Nazism, and white supremacy and  “alluded to the possibility of a violent Islamic response, pointing to the 2015 murders at the offices of the Charlie Hebdo newspaper in France.”

The next day, Everett and Hamline President Fayneese Miller denied in a mass email that they’d ever suggested “that some material be stricken from our classrooms and not shared with students” only to state two sentences later — in what the complaint rightly describes as “a model of Orwellian doublethink” — that the two images of Muhammad should not have been shown, because “respect for the observant Muslim students in that classroom should have superseded academic freedom.”

Studying the complaint, I was surprised to come across my own name. Part of López Prater’s case is that, although her name had been omitted from The Oracle’s articles about her, her reputation had been damaged internationally because her identity was easy enough to figure out, as illustrated by “an article dated January 5, 2023, [in which] a columnist for The American Spectator magazine identified López Prater as the professor at issue simply by reviewing Hamline’s publicly available undergraduate course listings for fall 2022.”

I’m no lawyer, but López Prater certainly seems to have a strong case. I hope she wins big. I hope Hamline’s trustees jettison Miller, Everett, Kersten, Kostihova, and everybody else in their employ who betrayed López Prater. I hope they find some way to reward Mark Berkson for his courage.

Let me note that the complaint is a delight to read. López Prater’s lawyers don’t pull punches. Every time they (justifiably) accused one of the poltroons at Hamline of “libel” or “slander” or “defamation,” I wanted to shout “Yes!”

And guess what? In an apparent response to the lawsuit, Hamline has suddenly decided that López Prater wasn’t Islamophobic after all. A letter signed by Miller and the head of her board of trustees contends that the “many communications, articles and opinion pieces” about the affair “have caused us to review and re-examine our actions.” Ya think? Describing Hamline as “a multi-cultural, multi-religious community that has been a leader in creating space for civil conversations,” but that, like every other institution, can “sometimes … misstep” (yes, this entire campaign of cruel, craven calumny was a “misstep”), the letter claimed that “[i]t was never our intent to suggest that academic freedom is of lower concern or value than our students.”

This, of course, is an obvious lie: in their “Orwellian doublethink” email, Everett and Miller explicitly averred that “respect for the observant Muslim students in [López Prater’s] classroom should have superseded academic freedom.” So strong was the international pushback against Hamline’s actions that even CAIR, too, whose representative threatened Charlie Hebdo–type vengeance, has also cleared López Prater of Islamophobia. I now look forward to her juridical vindication — and to a settlement that, pray heaven, proves every bit as damaging to Hamline, that foul nest of gutless wonders, as the Gibson’s Bakery verdict was to Oberlin.