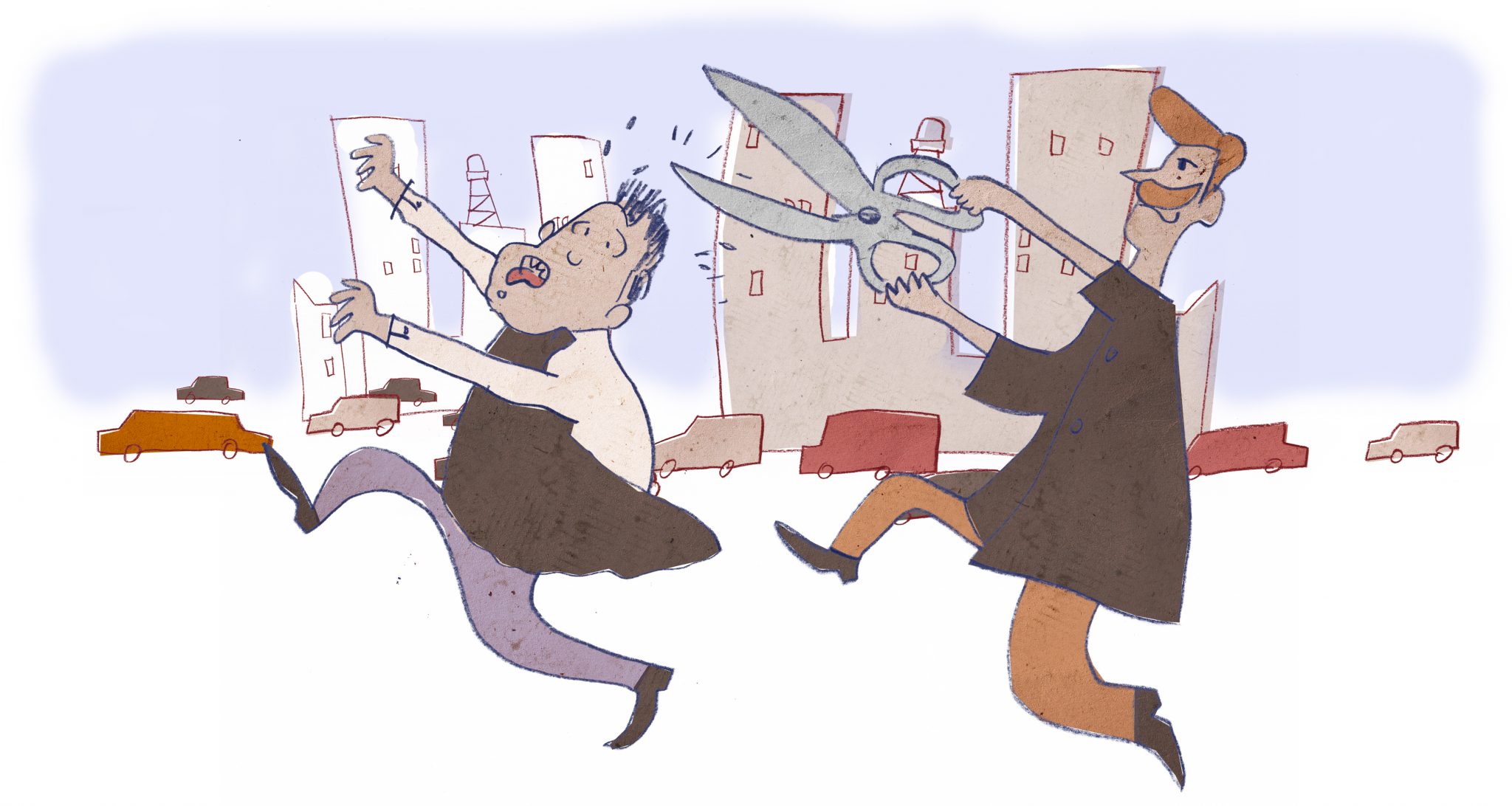 I went to get a haircut. I know, this hardly seems a life-changing event. Especially for you. But, you see, my hairdresser had put up a giant sign: “Clients must keep their mask on at all times and refrain from talking.” Upon seeing the sign I couldn’t help but mouth my thanks to the Almighty. The first time I walked into this barber shop, back in the Lower Pleistocene, mammoth bones still knotted into my curly locks, the man asked me, “How would you like it cut?” I presented my credentials as a tormented writer: “Quietly.” Since then he scrupulously respects my wishes. Unfortunately the rest of his clients don’t. So I’ve become somewhat of an expert on other people’s hairdressing conversations over the years. Finally I’ve found something in common with Nancy Pelosi.

I admire the skill veteran hairdressers have acquired, that allows them to change their opinions effortlessly, from one client to another. The client is always right. The first customer enters:

After a while, in comes another customer:

In hairdressing salons all that’s wrong with the world gets fixed in the time it takes to wash and trim. Famine, war, pandemic, everything. Inside that unkempt, shaggy guy who strides in looking all laconic, interested in getting his head shaved, there is an Alexander the Great, two or three Churchills, and a little Reagan, as well as coaches from all conceivable sports disciplines. He lowers his voice when he tells stories to add instant drama. His way of solving problems is always the same: “a strong hand is what this country needs.” Judging from what can be overheard in old gentlemen’s barber shops, the law-and-order-loving Right has an absolute majority. Either that or leftists cut their hair at home with the lawn mower.

Something entirely different occurs in modern hairdressing salons. Not long ago I had to go to one of them. The hairdresser seemed to have pulled all the hair out of his head and grafted it into his beard, so that in the mirror it simply looked like he was upside down. On the other hand, I don’t know if accidentally or voluntarily, he had suffered several perforations in his ear, the size of an adult hamster, with the interior of the crater stuffed with some sort of black lacquered metal structure, similar to what butchers use to hang beef ribs from.

Pervading the room was the very sad aroma of rancid masculinity, the sort of perfume that once caused repulsion in the Old West, which was not, generally, blessed by the aromas of Chanel. Such was the acidity of the air freshener that by the time I left the place, my contact lenses had melted into my eyes and my ears had miraculously unclogged. I suspect that if I ever had kidney stones again that wild and penetrating aroma would work as a natural lithotripsy.

The whole decoration was reminiscent of the old barber shops, imitating objects from last century. But as I looked at those tough barbers, dressed in black and perforated with piercings, with a hundred and one lotions on their biblical beards, I wondered if I had put myself in the hands of a Hollywood stylist or a Hell’s Angel — in any case, a fallen angel.

But the biggest difference between my usual hairdresser and that new one was the conversation. First of all, that guy didn’t seem to understand the subtleties that separate that monosyllable that you mumble out of politeness and the desire to participate in a debate about craft beers. I could have told him that when I want to drink cereal porridge floating in a cloudy liquid I prefer to have cornflakes and milk for breakfast, and that when I go for a beer what I pay for is precisely that it’s been brewed with some standard of filtering and appeasing of the malty stuff. But that would be polemicizing. And what I wanted was to enjoy the silence accompanied by the clacking of the scissors and to fall asleep to the sound of the razor. So I tried every onomatopoeia possible, including “aha” and “uhuh,” in response to his long rants about how the craft beer industry is succeeding, and to his prediction that by 2030 we’ll all be brewing beer at home. You know, the Great Reset and all.

But brewing beer at home, rather than a Great Reset, seems to me like a blue screen. In my opinion, we already spoil enough things because of this absurd contemporary obsession of trying to do everything ourselves: coffee, yogurts, bread, and even — for the most daring — muffins. What makes you think you can make coffee better than a coffee shop? And bread better than a baker? It would only be a matter of time before we started to spoil beer.

Still, I kept quiet. He wouldn’t have listened to me either. Unlike my regular hairdresser, these modern guys don’t want to listen, just talk. (If you’re going to tell me I’m generalizing, I am indeed; that’s what my job as an article writer is all about: generalizing as much as I can and being as unfair as possible.) I can only nod. After all, the fallen angel had his scissors half a centimeter from my jugular. I mean, I was in no position to tell him that I see little, if any, difference between his craft beer and a camel’s vomit.

Later, he surprised me with a long master class on climate change. Apparently, the hairdresser has been using environmentally friendly cosmetics for years, and I deduce that this is where the holes in the ears come from, perhaps a bad skin reaction that got out of hand. The last time I used a shampoo recommended by an environmental organization, geraniums sprouted behind my ears. And thank God, because a neighbor who used the same shampoo grew ears on his geraniums.

Today, with my hairdresser’s immersed in a cloistral silence, I was reminded of that modern vintage hairdresser’s. Over there, I’m sure they are still yakking at the top of their lungs about all kinds of nonsense and educating their clients in eco-progressivism. Meanwhile, at my hairdresser’s you can no longer hear the voices of those parishioners demanding a firm hand against everything. And despite how much I appreciate the silence while I’m being shaved, today I actually miss the noble art of conversation, only interrupted by the snipping of epileptic scissors.

The pandemic silence of my hairdresser’s is a disaster for international geopolitics. Every international policy seemed to arise from within these four walls, while my hairdresser quietly goes about molding hair. If this silence at the hairdressers goes on for much longer, if only those who don’t listen speak, if those customers hankering after iron fists remain silent, we won’t ever again be able to bomb the Middle East out of the blue, just like that, no due warning. What’s worse, we will all end up drinking craft beer and eating tofu for breakfast.