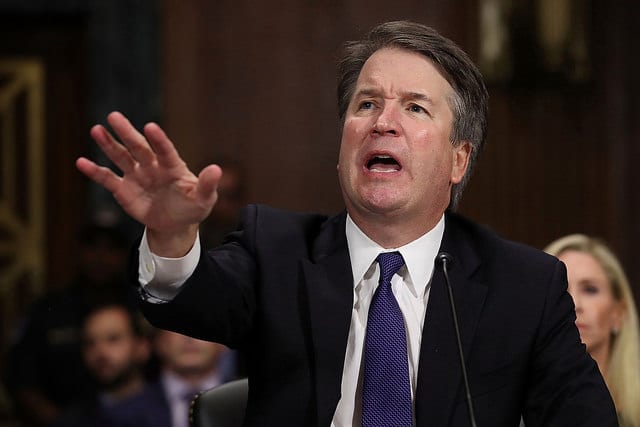 As I wrote here last week, the Democrats’ weeks-long, baseless smear of Brett Kavanaugh wasn’t quite yielding the results that the party hoped it would. What they accomplished was the uniting and energizing of a Republican base that previously had expressed zero interest in being united or energized.

Now that Kavanaugh has been confirmed, there is some hope on the left that the GOP electorate will now relax and become complacent.  That might work out better for them if they didn’t keep reminding us just how awful they are.

Former First Alcoholic Hillary Clinton kicked off this week with another one of her patented bitter proclamations:

Hillary Clinton: “You cannot be civil with a political party that wants to destroy what you stand for” https://t.co/8QI5BoEN6t pic.twitter.com/P04am7WREQ

I would point out to Mrs. Clinton that it is very difficult to be civil when all you “stand for” is incivility.

As if coordinating their efforts to prove that the ramblings of Granny Maojackets weren’t a one-off, this video of former Attorney General Eric Holder emerged on Tuesday:

Eric Holder: ‘When they go low, we kick them. That’s what this new Democratic Party is about.’ https://t.co/9TGR8TPjy0

That would be the former chief law enforcement officer of the United States of America, ladies and gentlemen.

It was bad enough when the leftist #resist mob (yes CNN, they’re a mob) was made up largely of snot-nosed kids who were only brave enough to get uppity in places like Portland and Berkeley, where the laws don’t really favor the local citizens defending themselves and where they knew they’d get cover from the liberals running the cities. Now we have the supposed adults in the room advocating for that kind of behavior.

This is different than what Maxine Waters did a couple of months ago. Even Democrats know that Waters is crazy. She’s easy to write off. Clinton and Holder are a different story though.

In typical liberal fashion, they continue to justify whatever aberrant behavior they wish to engage in by employing the 4th grade playground “He started it!” tactic, even though that’s never true.

As someone who was in the thick of the Tea Party movement, I find the reticence of the Mainstream Media in calling leftist mobs “mobs” extremely offensive. They had no problem from 2009-2012 explicitly referring to — or heavily implying — Tea Party gatherings as mobs, which we never were. One peaceful gathering after another in those days was portrayed as borderline violent anarchy, while borderline violent anarchy from the left these days is labeled “protest” from the MSM progressive apologists.

There is no reason whatsoever to believe that this feral behavior will improve if the Democrats regain power any time in the near future. They are the original “give ’em an inch and they’ll take a mile” people, after all.

A lot of races have tightened up in favor of the GOP in recent weeks. Now is the time to volunteer, donate, and exhort like-minded people to vote before mob rule becomes institutionalized.

Your father’s and grandfather’s Democrats are no more. This current manifestation has shown that they only want the utter destruction of those with whom they don’t agree.

It’s best we not give them the numbers to accomplish that.