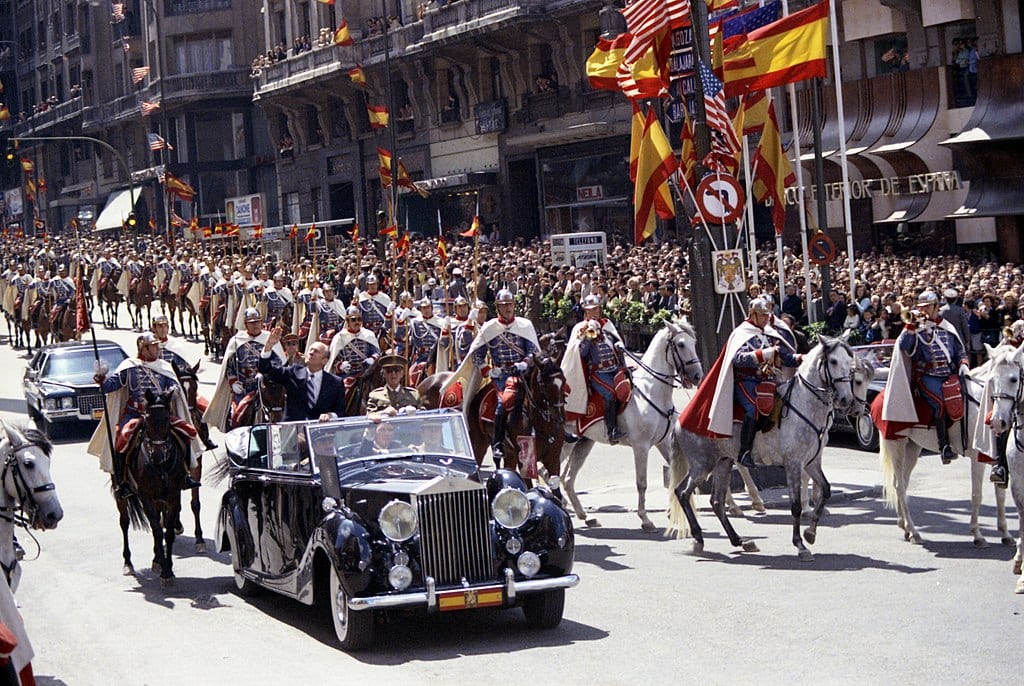 This just in: Generalissimo Francisco Franco is still dead, according to people who spoke to us on condition of anonymity because they were not authorized to comment. (Franco, for those who don’t study history because they think it’s sexist, was a either a leader or dictator in Spain, 1892–1975.) Reports of the general’s death may not have been exaggerated after all, but the general has not been resting easily yet (or at least his mortal remains have not been), and it’s not clear the Spanish people can rest yet either. Franco’s remains have been moved from an underground basilica that he built after he won the country’s civil war in 1975 to a family crypt near Madrid. Luckily for some Spaniards, Franco’s remains were not moved to Chicago, a move that might have enabled him to remain active in politics.

The cost of the transfer was estimated to be $70,000; enough to give each person in Spain living below the poverty level $145.71, which would buy them 37.5 Starbucks latte grandes (excluding tips). The leader of the opposition party said not one cent should be spent on moving Franco’s remains, an amount that would not even buy a used Starbucks napkin. “I’m more worried about living dictators than dead ones,” he said, which would likely have brought warmth to Franco’s heart if it were still beating, which, as we say, reliable sources insist is not the case.

During Spain’s civil war, the two factions were aided on one side by the fascist countries of Germany and Italy and on the other by the Soviet Union. If you don’t know your history — or Spain’s — which side would you have been on? The answer, probably, is “the wrong side.” Another answer is, it depends who writes the history: Fox News or CNN. One thing is clear: that period’s history wasn’t written by General Franco. He, after all, was a dictator.

Just what the rap is against dictators like Franco is not clear. Presumably they decide in their own wisdom to do things the people don’t like. That may not be very democratic, but it really is quite European, making the case against Franco somewhat confused.

When the Irish voted against joining the European Union, they were told — faith, ’tis the truth — to vote again (and presumably again, and again, and again if necessary) until they got it right, which they did on the next vote.

When the French voted against joining the EU, their betters didn’t bother to instruct them to vote a second time (couldn’t risk it): they themselves, in a symbolic beheading of the people, simply repaired to Versailles with champagne and caviar to vote the proper way, in favor of joining the EU.

More recently the British voted to leave the European Union but have been stymied by the political class, which likes wining and dining in Strasbourg (home of foie gras). If the pro-Brexit pols had a little more Franco in them, the Brits would have been out months ago. But we digress.

The impeachment charade being played out in this country would have Franco marveling at the Democrats’ chutzpah. If the Democrats can eject a legitimately elected president of the United States, a small-time dic like Franco should have been able to do a lot more in his country.

One of the raps against Franco was that he controlled the press. He believed — where have we heard this before? — that truth is what the people believe. Plus ça change. Now there is, at least in theory, a free press in Spain, although Spain lacks freedom-of-information legislation and sunshine laws — laws that even democratic governments chafe under. Says the Columbia Journalism Review, “It is very difficult to do serious government reporting without the benefit of hard facts.” Whoa, Nellie!

And difficult for the people to know what the facts are if the press doesn’t report them, eh, Columbia Journalism Review? Watch mainstream television and read mainstream papers in this country and you see bias in action as perhaps never before, at least never before in our lifetimes. Some “news” outlets now report that a majority of Americans support impeachment. And why shouldn’t they, given what they read and hear all day long? And why should Europeans be different?

Dictators operate in secret, and so do the Democrats currently bent on impeaching President Trump. Franco lives! At least in spirit.

But we can now confirm: Generalissimo Francisco Franco is still dead.

Rest in peace, general. We still may be able to learn something from your time.