by Jeffrey Lord
Flickr/Chairman of the Join Chiefs of Staff 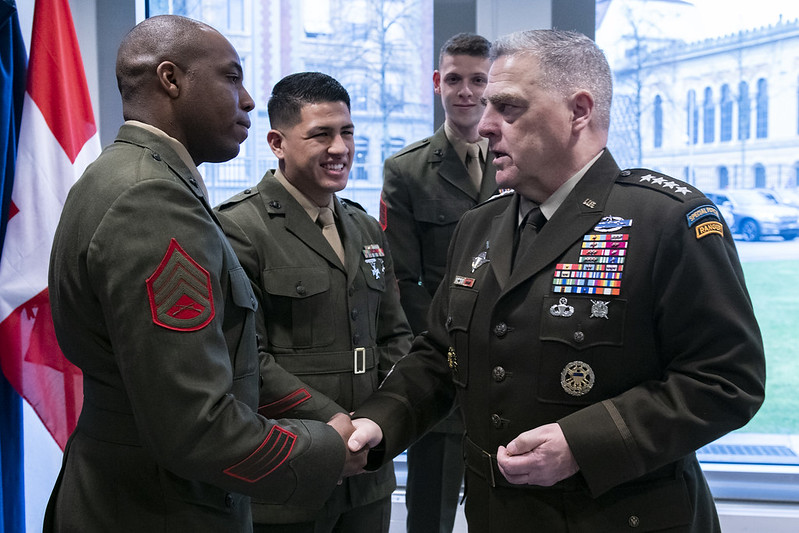 The headline over at Fox News was this:

The story reports this:

A former assistant secretary of the Army under President Trump has accused top military officials Chairman of the Joint Chiefs of Staff Gen. Mark Milley and Chief of Staff of the U.S. Army Gen. James McConville of engaging in a “pattern of behavior” that overstepped their authority and undermined potential commands from Trump.

In an interview with Fox News Digital, E. Casey Wardynski, a former assistant secretary of the Army for Manpower and Reserve Affairs under the Trump administration, accused high-ranking military officials Milley and McConville of making statements that insinuated they were calling the shots.

“These kind of behaviors and this willingness for military leaders to exceed their authorities and ignore authorities of the civilian officials appointed over them … positions under the Constitution and laws of the country was not something that came to them on Jan. 8,” Wardynski said. “It was something that they had done for a while.”

Why does this story sound familiar?

Do the names James Comey, Andrew McCabe, Peter Strzok, Lisa Paige, John Brennan, and Miles Taylor ring a bell? The first four were charged with running all or parts of the FBI, the fifth ran the CIA, and the last was a staffer in the Department of Homeland Security. (Taylor is the guy who signed himself as “Anonymous” in writing a much hyped attack piece on then-President Trump.)

What all of these people have in common —  and there are more sprinkled around Washington, one can be sure — is their high self-regard that they are, to borrow the term from the 1960s Vietnam debacle, “the best and the brightest.” In fact, it is this very belief that has led all of them to exhibit another trait from the 1960s — the arrogance of power.

Their tales would be amusing if in fact they were not such clear threats to American democracy and democratic values. Power, wrote the late Sen. J. William Fulbright, who penned an entire volume on The Arrogance of Power in 1966, “confuses itself with virtue and tends also to take itself for omnipotence.” Fulbright also noted that German soldiers in World War I wore belt buckles that read “Gott mit uns” — God with us — a phrase centered on the belief that “The Lord, after all, surely would not choose you as His agent and then deny you the sword with which to work His will.” It gave the soldiers, Fulbright says, “an exaggerated sense of power and an imaginary sense of mission” which in turn caused those who believed this to come to grief.

This arrogance of power is exactly what Casey Wardynski is talking about with Gen. Milley and Army Gen. James McConville. Wardynski is that former assistant secretary of the Army under Trump and is himself a retired colonel and a West Point graduate with a 30-year career in the U.S. Army.

All of the above listed people viewed their power while in the government as signs of their virtue, with that virtue giving them the right to override the elected president of the United States at will when they disagreed with him.

Recall that this was what greeted the Trump administration a mere 11 days after Trump’s 2017 inauguration. This was the headline in the Washington Post:

Resistance from within: Federal workers push back against Trump

This gem of a story reported this:

Less than two weeks into Trump’s administration, federal workers are in regular consultation with recently departed Obama-era political appointees about what they can do to push back against the new president’s initiatives. Some federal employees have set up social media accounts to anonymously leak word of changes that Trump appointees are trying to make.

And a few government workers are pushing back more openly, incurring the wrath of a White House that, as press secretary Sean Spicer said this week about dissenters at the State Department, sends a clear message that they “should either get with the program, or they can go.” …

The resistance is so early, so widespread and so deeply felt that it has officials worrying about paralysis and overt refusals by workers to do their jobs.

In other words? All of these people had nothing but contempt for America’s democratic values and would seek any way they could find to deliberately undermine the new, democratically elected president of the United States.

This arrogance of power is a disease that has metastasized in Washington. It is an anti-democratic, anti-democracy cancer that, we now know, has spread through the FBI, the CIA, the Pentagon, and more.

As The New York Post’s columnist Michael Goodwin has noted of Milley:

In plain English, this was an attempted coup. Milley, in a fit of pique over the president’s conduct after the election, reversed the chain of command. No longer would a duly elected civilian be on top.

A general trusted with awesome responsibility went rogue, usurping the president’s power and making himself commander in chief.

Milley’s actions are the latest manifestation of a sickness that led the leaders of many important institutions to turn their hatred for Trump into a license to break restraints, standards and even laws.…

The pattern is unlike anything seen in modern times and perhaps ever in American history.

The question now is: what to do about this? There are calls for Milley to be fired — and he should be. But all of this goes well beyond Milley. What we clearly now have in Washington is an arrogance of power that makes it plain that respect for democracy and democratic values is gone, with unelected generals and bureaucrats making it their business to undermine the core principles of the Constitution and the nation that Constitution has built.

Not good. Not good at all.