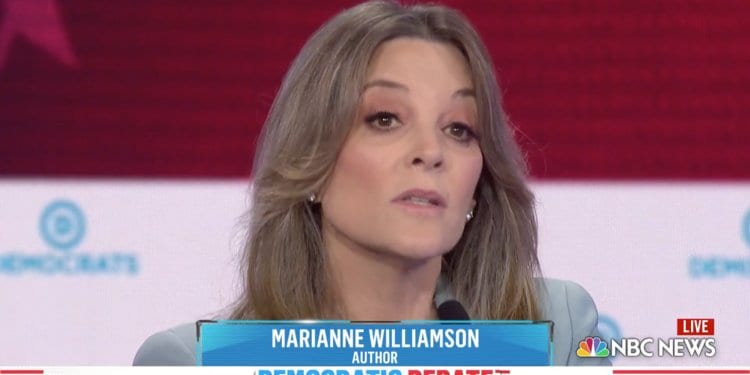 Marianne Williamson, the New York Times best-selling author and self-help connoisseur, may have struck a nerve with many in the Democratic Party during Thursday night’s debate. Her statements on the need for “love” as a guiding force in American policy gained her the honor of being the most-searched candidate on Google after the debate, and Williamson’s statements on issues such as campaign strategy can tell us quite a bit about the types of voter sentiment this outsider was attempting to attract.

Let’s begin with her obstinate disapproval of concrete plans for policy. Pointing to President Trump’s meteoric rise in 2016, Williamson pleaded with prospective voters not to get too caught up with actual policy stances. Her argument goes that Trump won the presidency not by presenting detailed solutions to actual problems, but rather by playing on the concept of fear and shouting slogans.

Williamson’s statements ignore the fact that Trump’s campaign was built on the promise to address illegal immigration, a policy issue that was (and is) of concern to a large number of American citizens. He also proposed a specific remedy: immigration reform and building the wall. In addition, Trump directly addressed the foreign policy, health-care, and economic failures of the previous administration while citing what he would do instead. Still, some political analysts see a parallel between Trump’s ascent and Williamson’s case for a campaign devoid of any substantive policy proposals.

This is in line with a general sentiment in the Democratic Party that a large portion of the American electorate (primarily those not living in urban areas) is simply an unprincipled political canvas vulnerable to being swayed by the strongest emotional appeal. Hence the claim in an article by Faris Bseiso and Gregory Krieg at CNN that the base of Williamson’s support is an “uncanny mix of spirituality, anti-corporate rhetoric and the desire to tell ‘big truth.’ ”

This type of message will likely appeal to many Democratic voters. For instance, read Williamson’s statement on the “deep, deep realms of racial injustice” concerning police shooting incidents. On the whole this does not coincide with the data, which suggests no bias in police shootings (especially if one takes a host of other factors, such as poverty rate, into account); however, it will certainly play with many in the Democratic crowd. For most of this group, unseen (a probable synonym for “systemic” in this case) racial discrimination is a significant problem for the country.

Although likely a misguided campaign strategy in the Democratic primary, let alone the general election, at least some of Williamson’s closing remarks — though odd —  had a somewhat positive reflection of America. This was in contrast to her peers on stage who reflected the standard Democratic viewpoint of America as the land of endemic racism and inherent bigotry, made evident to anyone tuning into the first two 2019 Democratic debates. After referencing remarks made by New Zealand’s Prime Minister Jacinda Ardern about making her country the best in the world for a child to grow up in, Williamson then claimed that under her leadership “the United States of America is going to be the best place in the world for a child to grow up.” This portrays the United States as a potentially hopeful place. Unfortunately, Williamson’s performance also cemented her solidarity with the Democratic solution to America’s supposed ills, and made clear what that promising future would look like: tear down the current system as the country marches hand-in-hand toward a borderless socialist utopia.