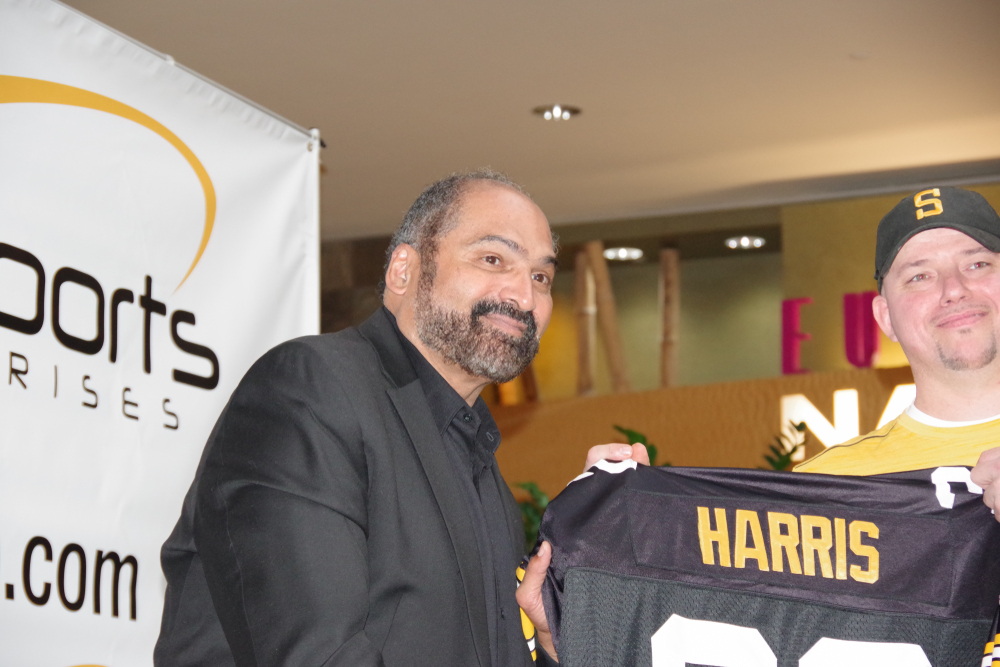 I heard the news last Wednesday morning. My wife and I were doing our annual Christmas trip to Pittsburgh’s historic Strip District, a wonderfully authentic half-mile strip of ethnic grocers and markets and restaurants — Sunseri’s, Wholey’s, Pennsylvania Macaroni, Labad’s, Primanti Brothers, Enrico’s Biscotti, Mike Feinberg Co. — plus shops on every corner with Pittsburgh Steelers paraphernalia. We load up for our annual Seven Fishes Christmas Eve feast.

I was inside Stamoolis Brothers setting down about eight bags as my wife grabbed olives, cheese, Baccala, stuffed grape leaves, Panettone. I checked my email and was floored by a message from the editor of Crisis Magazine, Eric Sammons.

Crisis Magazine is the excellent publication of Catholic faith and culture founded in 1982 by Michael Novak and Ralph McInerny. I had written a long piece for Crisis on the coming 50th anniversary of Franco Harris’ iconic — no, miraculous — Immaculate Reception, which occurred December 23, 1972. It is widely regarded as the greatest play in NFL history.

On that day in December 1972, the Steelers were trailing the Oakland Raiders 7-6. These were two incredible teams, with nearly 30 Hall of Famers between them. It was fourth and 10 for the Steelers on their own 40-yard line with 22 seconds remaining and no timeouts. Steelers quarterback Terry Bradshaw uncorked a desperate pass in the vicinity of running back John “Frenchy” Fuqua, who was laid out by football’s nastiest player, Jack Tatum, known as “The Assassin.”

As Tatum brooded over his prey, relishing the sight of a maimed Fuqua beneath him, rookie running back Franco Harris dashed to the ball before it hit the ground. Credit for that decision goes in large part to an unbeknownst hero: Harris’ legendary football coach from Penn State, Joe Paterno, who drilled into his players an instinct to always run toward the ball. Franco alone did that, and proceeded to score. The place erupted.

Curt Gowdy, the announcer for NBC’s national broadcast, declared: “You talk about Christmas miracles. Here’s the miracle of all miracles!”

Even then, the miracle needed a name. One was soon supplied by an inspired local bar owner named Michael Ord. Filled with the spirit of the season and with Iron City beer, the right reverend Ord, part bartender and obviously part prophet, hushed the brethren at his crowded tavern and asked them to join him in a toast to what he ordained “the Feast of the Immaculate Reception.”

And so it was. The name caught on and — if you’ll pardon the expression — soon became dogma.

It became the most famous play in NFL history, filled with lore and lots of wacky conspiracy theory. (Watch this terrific NFL Network documentary on the Immaculate Reception.)

That brings me back to events last week.

It is hard to convey what Franco Harris meant to football, to Pittsburgh, and to Italian-Catholic Americans.

For this Dec. 24, 2022, the Steelers were set to play the Raiders again in a nighttime, Christmas Eve rematch that the NFL and Steelers organization were touting as the epic 50th anniversary celebration. The special night would be a loving remembrance of Franco Harris, whose jersey the Steelers would retire at halftime. It would be his special night.

But it wasn’t meant to be.

To that end, my email from the Crisis editor hit me like a helmet-spear from Jack Tatum: Franco Harris had just died.

I was stunned. Everyone was. Just hours before, Franco was doing media interviews. It was a complete shock.

It is hard to convey what Franco Harris meant to football, to Pittsburgh, and to Italian-Catholic Americans. He was not a native of Pittsburgh, but like so many athletes who came here to play sports, he fell in love with the people and culture and made it his home. He became an ambassador for the city. The people had welcomed him with open arms.

That was especially the case with a colorful group that dubbed itself Franco’s Italian Army, founded by local businessmen Al Vento and Tony Stagno (Vento’s Pizza), who, incidentally, during the December 1972 game had placed the malocchio (“evil eye”) on the Raiders. The story of Franco’s Italian Army is hilarious, from its antics by Vento and Stagno to the uproarious role of perhaps the most iconic Steelers figure of all: the inimitable Myron Cope, inventor of the Terrible Towel and one of the most beloved men from this region ever.

It was Cope who received Ord’s proclamation of the Immaculate Reception and decreed it to the masses during his sports broadcast on WTAE-TV. Cope, who was Jewish, pleaded with Catholic viewers to not “hold the moniker to be impious.” Not a soul did. They loved it.

For the record, Franco was half-Italian. His mother, Gina Parenti, was born in Italy. She was an Italian war bride who met Franco’s African American father in Italy during World War II.

As someone likewise with a fully Italian mother, I can attest to what Franco meant to Italians, especially from this area.

My mom’s mother had two brothers and a bunch of sisters. Countless times they said to me, “You know, Paulie, Franco is Italian!” (Yes, they called me “Paulie.”)

Italians are like that. Every true-blue Italian can instinctively and proudly rattle off to you other notable Italians. I remember sitting in a restaurant in Rome in June 2014 while two waiters poured me wine and Pellegrino water as they recited names of Italian American sports figures.

Here in Western Pennsylvania, the Italian pride in Franco Harris ran deep. My aunts had Franco’s Italian Army shirts. My great grandmother, Nonna, wore one. The old woman could barely speak any English, but she knew how to yell “Franco!” (She was also a huge fan of Pittsburgh-Italian wrestler Bruno Sammartino.) When they weren’t waving the flags — Italian flags and Terrible Towels — they dared to summon nefarious powers against the enemy. My mother’s sister was notorious for gazing into the TV to place the malocchio on many a Steelers nemesis.

And Franco was their beloved paisano. “Run, paisano, run!” was the slogan/banner of Franco’s Italian Army at Three Rivers Stadium. He took his fans on a run from the Immaculate Reception through four Super Bowl victories, retiring as the third leading rusher of all time.

Franco remained such a part of Pittsburgh. Last April, it was Franco who went to the podium at the NFL Draft in Las Vegas to excitedly announce the choice by the Steelers of Pitt Heisman candidate Kenny Pickett as their first-round draft pick. Steelers Nation went nuts.

And in a stroke of irony (I’ll call it Providence), it was quarterback Kenny Pickett who took the Steelers downfield with less than a minute left to beat the Raiders once again, this time on the 50th anniversary game of the Immaculate Reception. (My 15-year-old looked at his old man like I was out of my mind when with 40-some seconds left in the game on Saturday night I prayed aloud for the intercession of Franco in heaven. You laugh, dear reader, but can you say that my request went unheeded? Hmm?)

In Pittsburgh, Steelers football has long had almost religious overtones. That is certainly the case for the Immaculate Reception. And last week, Franco’s totally unexpected death just before the anniversary honoring him again almost seems to have some sort of religious significance here in our cosmos. It was a sad loss, only partly redeemed by a big win on a blustery cold Christmas Eve — the eve of Christ’s coming — in the Steel City.