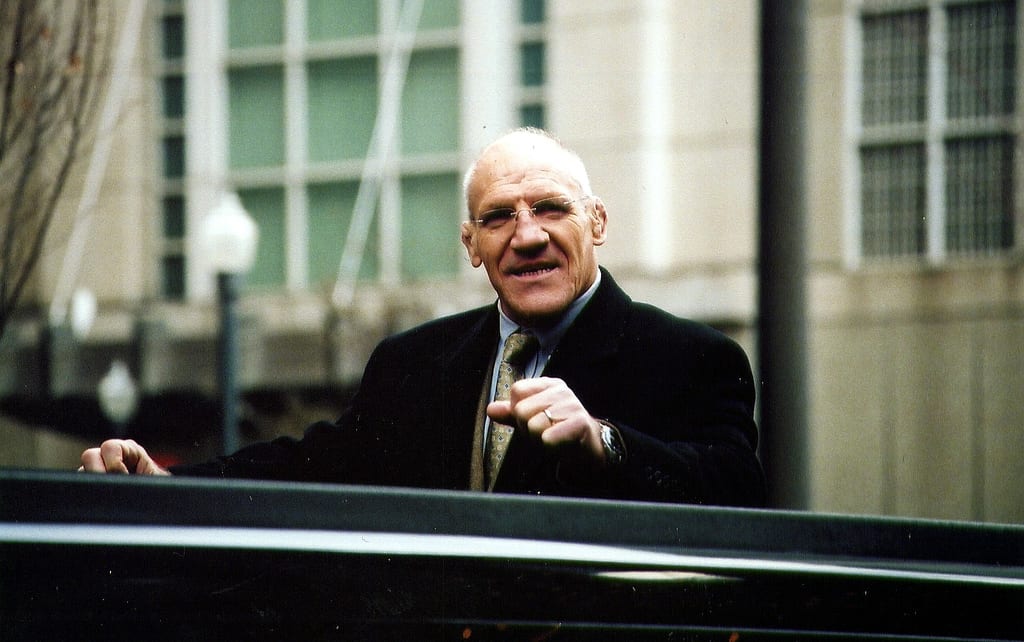 They were lined up out the door on Sunday at the Freyvogel Sons Funeral Home on Centre Avenue in the North Oakland section of Pittsburgh. It’s a picturesque part of the Oakland-Shadyside area, with stately old houses aplenty. South Oakland, by contrast, has always been blue collar, marked by row houses, corner restaurants, bars, and grocers — lots of pavement and no lawns. In fact, the only grass I noticed when I drove through the Italian section of South Oakland on Sunday was Dan Marino Field, named for another local legend who rose to national prominence in sports and entertainment.

Dan Marino Field is a football-toss down the road from nondescript Cato Street. And it was there, on Cato, that a skinny immigrant kid named Bruno Sammartino was raised in the 1950s. No one gave much respect to Bruno at nearby Schenley High School. He had come off the boat so malnourished from a life of deprivation — including hiding from the Nazis — that he wasn’t even a 90-pound weakling (he weighed about 84 pounds). But after intense workouts and weightlifting at the local YMCA, and — above all — learning to wrestle, he would literally one day be able to body-slam any thug who messed with him.

And now, on Sunday, April 22, 2018, they queued up outside to pay their final respects to Bruno, who, at 82 years old, had passed away — one of the toughest but nicest guys you could ever meet.

It was the death of a legend — a legend to the world of studio-wrestling and much of television entertainment generally in the 1960s and 1970s, and certainly a legend here in Pittsburgh, as well as a legend in the town of his birth. That town was Pizzoferrato, where last summer Bruno was on hand for the commemoration of a 10-foot-high statue erected in his honor by the proud locals in the old country.

If you owned a TV set in the 1970s, you knew Bruno Sammartino. Just as you knew Andre the Giant, George “The Animal” Steele, Ivan “The Russian Bear” Koloff, Superstar Billy Graham, Gorilla Monsoon, Baron Von Raschke, Haystacks Calhoun, and an assorted unforgettable cast of colorful, wild characters. Among them, none held the title of champion as long as Bruno, despite 10 surgeries — one of them for a broken neck.

One Pittsburgher I heard from over the last few days talked about the time he took his grandmother to watch her idol in person. Bruno was tossed from the ring that afternoon by Larry Zbyszko. The enraged granny unleashed herself upon Zbyszko with her purse, giving him a thrashing.

And then there was “Ringside Rosy,” who lived on Pittsburgh’s Northside. She was notorious for hitting wrestlers with her cane or umbrella or whatever instrument of convenience.

Bruno Sammartino’s mother was Emilia, who he called his “hero.” She risked her life repeatedly for the family in their Italian village under Nazi occupation. She was shot once. Another time she was captured but escaped the SS. Bruno said that if it wasn’t for her, he wouldn’t have survived.

Bruno adored his mama. Every day for decades the celebrity visited her at the tiny house on Cato Street for lunch. He came impeccably dressed for these special moments. Witnesses remember him in the summers hopping out of his convertible with a cheerful “Buon giorno!” before going inside to meet his special gal. (Bruno also had a special gal in his devoted wife of 59 years, Carol.)

Like so many self-made men who hit it big, Bruno must have offered to move his mom out of that cramped box into the breezy suburbs. Emilia would hear none of it. The aged Italian neighborhood with a view of the smokestacks and giant flames shooting into the sky from the Homestead Works and LTV Steel and J&L Steel below Panther Hollow was her home. She wasn’t budging.

Emilia stayed there until she died in 1995. A long life. Surely Bruno accepted that it was her time to go?

“I was 59 [when she died], and I was so devastated that I can’t even put it into words,” the tough guy told a Pittsburgh Post-Gazette sportswriter. “People say to me, ‘My God, Bruno, she was 97.’ I say, ‘Does that mean I love her any less and miss her any less?’”

He always missed his mama.

And now, Bruno is once again reunited with Emilia. It will be lunches once again, day after day, every day. Enjoy, Bruno.

And for all those unique TV memories of a truly bygone era, grazie mille. What a different time it was. Requiescat in pace.

Paul Kengor
Follow Their Stories:
View More
Paul Kengor is professor of political science at Grove City College in Grove City, Pa., and senior academic fellow at the Center for Vision & Values. Dr. Kengor is author of over a dozen books, including A Pope and a President: John Paul II, Ronald Reagan, and the Extraordinary Untold Story of the 20th Century, The Politically Incorrect Guide to Communism, and Dupes: How America’s Adversaries Have Manipulated Progressives for a Century.
Most Popular
1
Dismal Science
The Biden Administration: Sophistry in Motion
by Frank Schell