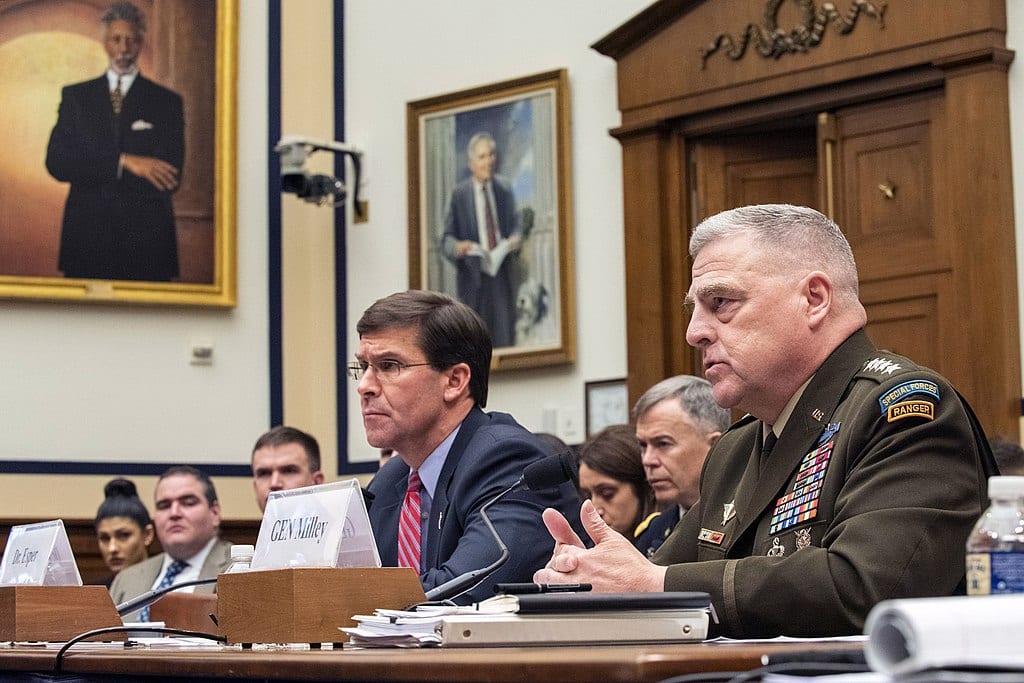 About a dozen Army bases are named for Confederate generals including Robert E. Lee, Braxton Bragg, John Bell Hood, and A. P. Hill. That fact enrages the professionally offended. The “woke” crowd — which ranges from congressional Democrats to the Black Lives Matter movement and the Antifa thugs — is demanding that those names be erased not only as the names of bases but from American history.

Last month, a day after an Army spokesman said that top military leaders were open to discussing whether the names should be changed, President Trump tweeted, “my Administration will not even consider the renaming of these Magnificent and Fabled Military Installations. Our history as the Greatest Nation in the World will not be tampered with. Respect our Military!”

There is a strong undercurrent of the Black Lives Matter movement in the service academies and other parts of the services.

But there is a conflict within his administration. Defense Secretary Mark Esper said he was open to renaming the bases bearing the names of Confederate generals.

Gen. Mark Milley, Chairman of the Joint Chiefs of Staff, also opposes the president. Last week, Milley told the House Armed Services Committee that the military is taking a “hard look” at renaming the bases. He added that the Confederacy rebelled against the nation and the officers who joined the Confederacy committed an act of treason and turned their backs on their oaths of service.

Milley’s analysis, while facile, has some merit. But Milley fails to account for how and why officers who had served with distinction in the U.S. Army — people such as Lee, Bragg, and many others — turned their backs on the nation. They did, but their reasons for doing so were, in their minds, essential to their loyalties to their states.

Fifty years after the Declaration of Independence, the division of American society over slavery was nearly complete. The Missouri Compromise of 1820, crafted to prevent a division among the states, allowed Missouri to join the Union as a slave state but provided that any states and territories to its north would be free. It set the stage for the conflict that erupted four decades later.

The Civil War was inevitable. It might have been delayed if Abraham Lincoln — an eloquent abolitionist as he demonstrated in the 1858 Lincoln–Douglas debates — hadn’t won the 1860 election. But the identities of the states had, by then, become “slave” or “free.” There was no in-between and no compromise.

In 1820, and even in 1861, the idea of the Union was still new. In 1820, the minds of living men remembered the Revolution. The principal loyalties of people such as army officers in 1860 were still to their “sovereign” states, not to the central government of the Union. The concept of loyalty to the United States, not a sovereign state, was a product of the Civil War.

To men such as Lee, it was inconceivable to take arms against their native states. To them it was unthinkable to fail to resign from the U.S. Army and take their posts in defense of their states as generals of the Confederacy.

Milley misses that essential point entirely. But even if he recognized it, that wouldn’t end the matter because the Democrats, the Black Lives Matter movement, and others won’t give up that issue. Trump’s refusal to rename any bases adds fuel to their fire because their principal purpose, above any other, is to defeat Trump in November.

The Black Lives Matter movement is a considerable force in American politics this year. They brook no dissent or opposition to their theory, which is fundamentally wrong. All lives matter. As novelist Michael Connelly has written in his “Harry Bosch” mysteries, everybody matters or nobody matters. It cannot be otherwise in a democratic society. Anything different amounts to anarchy and mob rule.

The Black Lives Matter movement tears down statues of Confederate generals. People such as they have gone on to tear down statues of Christopher Columbus and deface monuments to Frederick Douglass and the 54th Massachusetts regiment. They don’t care that Frederick Douglass, a former slave, became one of the greatest anti-slavery orators or that the 54th Massachusetts was a regiment composed of black soldiers who fought, and many died, in the 1863 battle at Battery Wagner.

In short, the BLM people are not merely ignorant. People such as they want to tear down our society’s structure and its culture. They are ashamed of our history and want to erase it.

People who tear down and deface these memorials are vandals. They should be punished to the full extent the law allows. But democratic — small “d” — governments can do as they wish. They have the authority to remove Confederate statues and memorials if, as elected leaders, they choose to do so.

In the Virginia town where I live, the county government has chosen to remove the generic statue commemorating Confederate soldiers who died in the Civil War from the lawn in front of the county courthouse. It’s not a statue of a general; it’s a generic tribute to those who died fighting for their state. It is a bad decision, but democracies make mistakes just like their totalitarian counterparts. Statues of mass murderer Joseph Stalin are newly popular in Vladimir Putin’s Russia.

Sen. Elizabeth Warren (D-Mass.), still running for Joe Biden’s veep slot, proposed an amendment to the Defense Authorization Act for 2021 that would require a three-year study of the base name issue and lead to the renaming of all bases named for Confederate generals. Warren’s amendment passed by voice vote last week in the Senate Armed Services Committee. Two House members — one Democrat and one Republican — have proposed legislation to require the name changes within a year.

Renaming the bases won’t damage the military. But Esper and Milley’s political stances might. There is a strong undercurrent of the Black Lives Matter movement in the service academies and other parts of the services. Any politicization of the military is dangerous to our system of government. If Esper and Milley don’t see that danger in what they are saying, Trump should fire them both.