Hither and Yon, Top Story Impeachment, LSU at the White House, Martha McSally, Megxit, Tom Brady
Menu
Hither and Yon
Five Quick Things
Trump is more fun than his tormentors, the NFL's old quarterback guard might be declining, and a few other items from hither and yon. 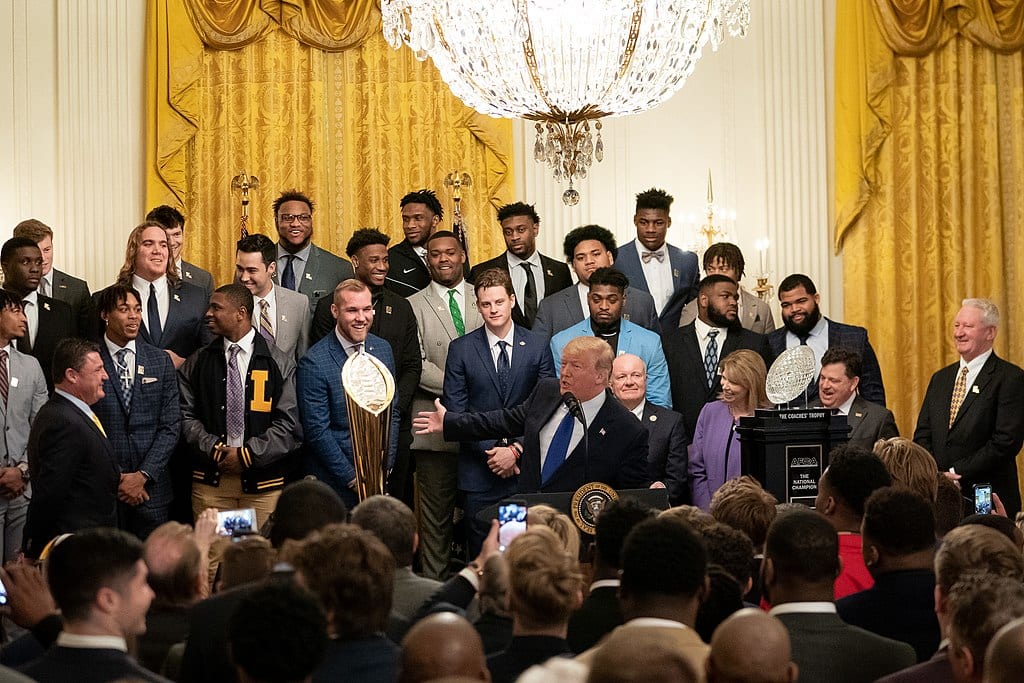 Forgive the rather shallow entry in this space today, as your author is coming off a nonstop weekend novel-writing binge. I’m working on the sequel to Animus, the novel I published on Amazon back in September, as it’s a goal to finish the first draft by the end of the month, and I’m finding that novel-writing and political commentary are not particularly mutually reinforcing endeavors.

Plus, there isn’t all that much going on in the world that presents as suitably urgent and compelling as the subject for a column in its own right. So instead, I offer nuggets from here and there.

1. Impeachment is a joke, and everybody knows it.

I was going to do a column about Nancy Pelosi finally sending impeachment articles to the Senate, but the whole thing just bores me to tears. We all know there won’t be 67 senators voting to convict, so why is this even happening?

Better put, we know the American public isn’t interested in impeachment, so why are the Democrats pushing it in an election year when the GOP is going to have more money than they will for House races?

Yes, yes. We all know answers to that question. But none of them are sufficient. Internal Democrat politics being inflicted on the American people like this is abject electoral poison. It used to be that there were adults in that party who knew these things and therefore would always stop short of slashing their own throats and getting their blood all over our shoes. Not this crowd of idiots.

What wouldn’t be a bad idea is for state Legislatures in red states to start passing bicameral resolutions condemning the impeachment in their legislative sessions this year. And for good measure, those resolutions can also demand a federal investigation of the Bidens’ foreign corruption in not just Ukraine but also China.

2. Trump is more fun than the leftists (and purported conservatives) who hate him.

No better example of this can be found in the video of the president’s welcome of the LSU football team, which won a national championship last week. As pundits from the New York Times and Vox tut-tutted about Trump’s crassness, he clearly created a warm and fuzzy feeling with the team during his welcome speech, breaking from the script to twice joke to them by saying “You guys are gonna be sooo rich” and teasing head coach Ed Orgeron about his gravelly voice. At the end Trump even managed to troll his critics by noting that good presidents and bad have occupied the White House, and “you’ve got a pretty good one now, and they’re trying to impeach the son of a bitch. Can you believe that?”

The remark brought the house down. Trump then invited the players to take pictures in the Oval Office, where they took part in a social media craze by dancing to the HPSHAWTY rap song “Get the Gat” in the Oval. A video of the players dancing, along with Gemi Bordelon, the wife of a prominent ex-player and current LSU booster named Ben Bordelon, went viral. And as official Washington clutched its pearls at the kids having fun so near to the Resolute Desk, Trump retweeted the video.

Not since Andrew Jackson opened the White House for drunken carousing by hillbillies from the early frontier has a president so thoroughly stuck a finger in the eyes of the society crowd, and the effect is simple. He’s fun, and they’re not. So what if he’s inappropriate? The “appropriate” people in American politics gave us Mitt Romney, John McCain, pointless wars, sclerotic economic growth, hopeless deficits, and Nancy Pelosi as the Speaker of the House not once but twice.

Tell “appropriate” to Get the Gat.

3. So what about Martha McSally?

The Arizona senator popped off to what was a perfectly normal question by Politico‘s Manu Raju about impeachment, calling him a “liberal political hack” and refusing to answer him, and the Washington Media treated it as a scandal.

It’s not a scandal.

Manu Raju, despite all the whingeing about how respected he is, is a liberal political hack. Everyone in D.C. knows it, they just don’t think there’s anything wrong with being a liberal political hack. Ask yourself how the Kavanaugh hearings happened if America had an unbiased and objective mainstream media. Or how the Trump–Russia thing could have gone on for more than two years. Or how George Stephanopolous could have happened. Or Ben Rhodes’ “echo chamber,” for that matter.

Did Raju do anything personally to deserve a tongue-lashing from McSally? Who cares? Rudeness to biased lefty media is only the start of what Republican politicians, particularly in a place like Washington, ought to be doing. I’ve long suggested to Republicans running for office that they independently record every interaction they have with reporters and make those recordings available on social media every time those reporters offer their journalistic product so that the public can examine how much daylight there is between what’s reported and the context and exact wording of what’s said.

If ever that became common practice, McSally’s treatment of Raju would probably be seen as light compared to what would come.

4. No, I don’t care about Harry and Meghan. We fought a revolution so I don’t have to.

I get it that following the British royals is something of a pastime for some people, like sudoku or gardening or watching Three’s Company reruns. But the media frenzy over Prince Harry and Meghan Markle dumping out of the royal family is clownish and ridiculous.

We all know what’s going on here. She bit off more than she could chew marrying somebody from the most whitebread, conservative family on Planet Earth, thinking that becoming a member of the Royal Family would mean she’d really made it in the world — a modern-day Grace Kelly without having to actually be Grace Kelly. But when the British media, which is, let’s face it, something akin to a pack of wild dogs, decided they liked her about as much as they did Jerry Lee Lewis, she talked Harry into a Lewis-esque break with the royal family.

“Aingland can kiss mah ass!” is what we got.

Which is a nothing.

They’ve no shortage of British royals. Meghan Markle is a “B” actress who … has she been in anything other than Suits? It’s predictable that she’ll drag Harry into social justice warriorism, seeing as though she’s got all the usual Soros-y friends, and we’ll soon find these two as insufferable as Greta Thunberg, with, as Ricky Gervais might say, only a bit more schooling.

But they’re not relevant. They wouldn’t have been had they stayed in the royal family. Neither one of them does anything particularly deserving of fame, so here’s to the vain hope that nobody hears anything about them ever again.

5. The NFL’s great old quarterbacks are fading away.

One thing to take from San Francisco and Kansas City emerging as this year’s Super Bowl contenders is that the NFL’s gold-standard quarterbacks are beginning to recede from the spotlight.

This season was the last, in all likelihood, for Eli Manning. It was certainly the last for him in New York. His brother Peyton is already gone from the scene. Tom Brady probably hasn’t played his last in New England, but Brady was definitely not Brady this year, and he was put out of the playoffs early after a late-season swoon cost his team a bye in the first round of the playoffs. The Chargers’ Philip Rivers didn’t even make the playoffs, and he might be done with the team.

Drew Brees may have a little more gas left in his tank than Brady, and certainly more than Eli, but he didn’t play a great game in the Saints’ overtime loss to Minnesota in the playoffs and a 13-3 season that included a 5-0 record when Brees was out with a thumb injury and Teddy Bridgewater was the team’s quarterback was wasted. Brees isn’t the Saints’ biggest problem; an inconsistent pass defense and the lack of productivity from wide receivers not named Mike Thomas rank higher. But the end is coming near for him in New Orleans, and everyone knows it.

And on Sunday night there was San Francisco putting it to Aaron Rodgers and Green Bay. Rodgers is still excellent, as is Brees, but Frisco’s determined pass rush got to him often and confounded the Packer offense until the game had been decided at halftime. Both Green Bay and New Orleans went 13-3 in the regular season, so it’s hard to say Brees and Rodgers are declining. But Patrick Mahomes, Lamar Jackson, Jared Goff, and Jimmy Garappolo are beginning to overtake the old favorites, and the guard is changing.

Next year it will be interesting to watch Brady, Brees, and Rodgers rage against the dying of the light. That might be the story of the NFL next year.

Scott McKay
Follow Their Stories:
View More
Scott McKay is publisher of the Hayride, which offers news and commentary on Louisiana and national politics. He’s also a novelist — check out his first book “Animus: A Tale of Ardenia,” available in Kindle and paperback.
Media Matters
The ‘Orange Man Bad’ Disease
by Robert Stacy McCain
Political Hay
The Impeachment That Killed Americans
by Jeffrey Lord
Gridiron
End of the Brady Rule
by Geoffrey Norman
Daily Folios and Consecutive Sentences
The Real Threat to Our Democracy During Coronavirus
by Dov Fischer
Flynn Files
The Difference Between Joe Biden, Jesus Christ, and Herpes
by Daniel J. Flynn
Crime Time
Flight of the Drama Queens
by George Parry
o
Sign Up to receive Our Latest Updates! Register