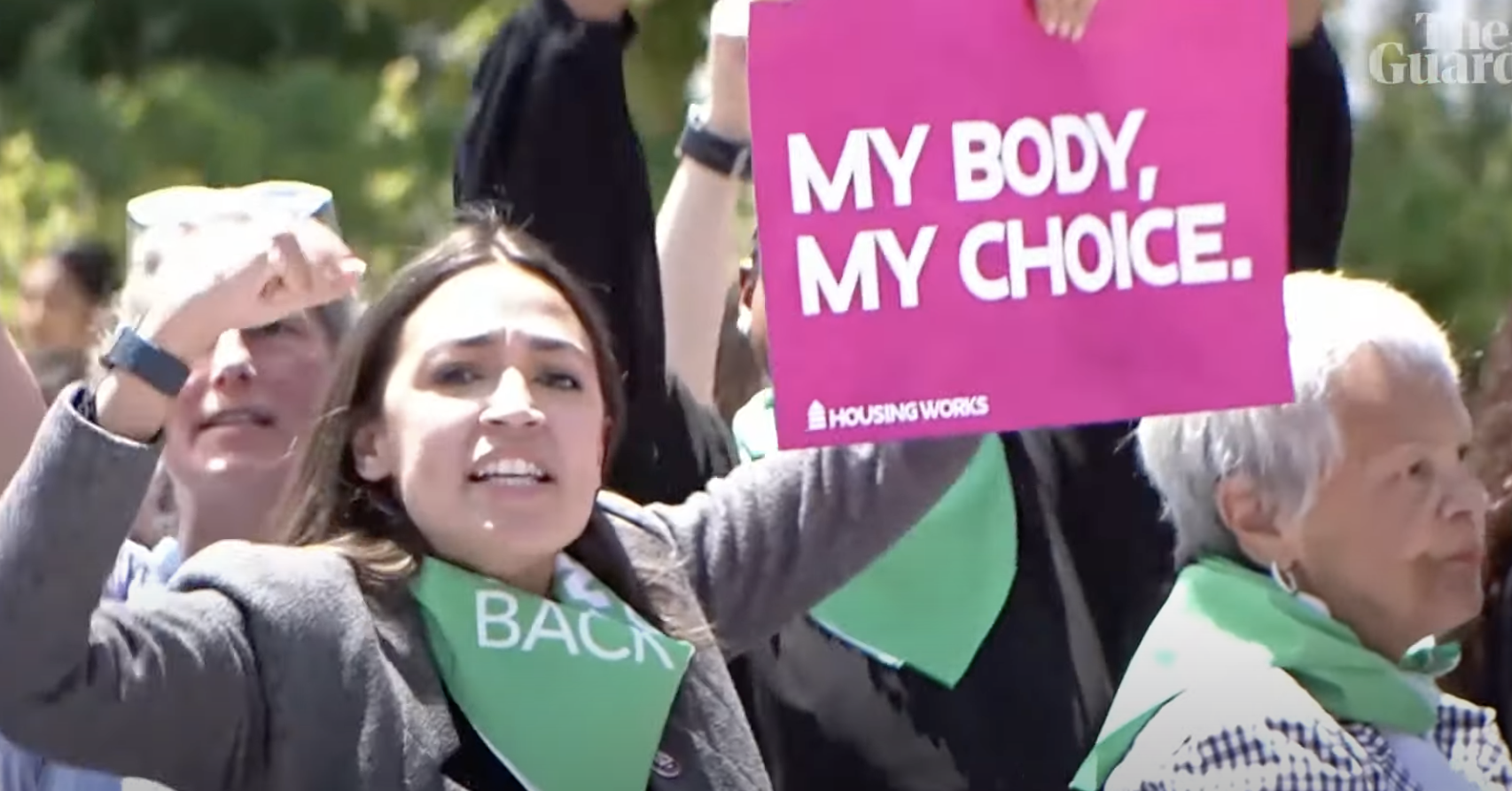 It’s been a long week. Let’s just get this started.

It’s not just an adjective anymore; it’s now an acronym.

AWFUL is actually a repair job on another acronym you might already know about, namely AWFL. The latter stands for Affluent White Female Liberals, which is very good but not perfect. We’re fixing it: now it’s Affluent White Female Urban Leftists, because the acronym absolutely needed a “U” to be complete and also because we’re done calling these people liberals. There is nothing liberal about them — other than killing the unborn they’re not for any sort of liberty normal Americans would recognize.

And as we’ve touched on a few times in this column, the AWFULs are the target market for today’s Democrat Party messaging and the legacy corporate media’s newscasts. AWFULs are the people corporate advertisers are attempting to reach, because they tend to live alone and have the time and extra money a barren personal life will provide in order to consume the products and services drug companies, Amazon, and Apple have to offer.

AWFULs are the target market for today’s Democrat Party messaging and the legacy corporate media’s newscasts.

The problem is that the AWFULs are generally extremely unhappy people. Disproportionally single, childless, frantic about the sands of their biological hourglass draining away and very often finding themselves hitting terminal velocity in their attempts to mount the corporate ladder, they’re seeking meaning in left-conformist politics. You can spot them on social media tagging themselves as vaxxed and boosted and/or covering their pictures in the Ukrainian flag while posting about how a hot summer proves Global Warming Is Real You Guys, and their dating profiles are covered with things like “I don’t need a man” and “Trumpers, swipe left.”

Everything about these people bristles with dissatisfaction, hostility, and badly channeled, negatively charged emotion. And today’s Democrat Party specializes in pandering to them. The examples are everywhere — woke, messianic causes cited to justify obviously destructive policies, and out-of-control emoting toward those who try to apply the brakes.

And while I could offer up the insane Liz Warren or Gretchen Whitmer as the political avatars of the AWFULs, to be honest the best example particularly of their up-and-coming generation is Alexandria Ocasio-Cortez. AOC’s fraudulent “arrest” at the Supreme Court this week was a sublime example of AWFUL virtue-signaling, and when she was called out for faking herself in handcuffs and responded with a clownish denial it was perfect.

By the way, despite what pretenses she might make, AOC is every bit the AWFUL. Including the “W.” She might make much of the Spanish surname, but this is a white woman from Westchester County whose rich daddy put her through Boston University. She’s no character from West Side Story.

It’s AWFULs, otherwise known as Karens, who are the most unpopular people in America. Their female contemporaries who aren’t AWFUL can’t stand them, and really neither can anybody else. But the Democrats have painted themselves into such a corner that they’ve got to keep pandering to the AWFULs because without them (and perhaps the beta males who traffic with them), they’ll have a hard time finding anybody who’ll vote blue.

2. Here’s one terrible political ad, and the reason it’s as terrible as it is.

Gary Chambers is running for the Senate in Louisiana. He’s going to lose, big, to John Kennedy, who’ll likely pull 55 percent or more in a jungle primary race, which as of our last check had 11 candidates qualifying.

Chambers isn’t really trying to get elected. He knows he has no chance at that. What he’s trying to do is milk his Senate run for as much notoriety and, perhaps, back-door swag as he can get out of it. That’s been a reasonable success so far; Chambers has raised about $1.4 million to date.

The problem is, he’s spent $1.3 million. And a lot of that campaign spending isn’t particularly targeted to electoral efforts. Chambers comes off a bit like Mansa Musa on the way to Mecca; he’s blowing money around in clouds, and he’s running out of it.

So he just popped this out:

The U.S. Supreme Court has placed women in danger. There is nothing “pro-life” about restricting women’s rights.

As I noted at my site, this is about trying to play on the AWFULs to see if Chambers can snag a few bucks from them to keep his gravy train rolling. It’s no surprise that in the ad the victim of the back-alley abortion is a white girl and the back-alley abortionist who butchers and kills her is a black guy. The cynicism and bad faith in this is astounding, but honestly you can’t call it dumb. Chambers and his people know the grift perfectly well, and that’s what this ad is for.

It’s a rotten ad, because its motives are rotten. For what it’s trying to do, it might actually be effective. Lots of people in Louisiana are beyond disgusted by it, though.

It seems like most of the reaction to yesterday’s column about the new Deborah Birx book, in which she paints herself as a heroine for having lied America into COVID lockdowns, was positive. But some was not, and I thought I’d address a bit of it.

It is not an attack on Donald Trump to say that Silent Invasion, Birx’s memoir, does him damage. And yesterday’s column making that case makes it from a revivalist, which is to say pro-Trump, perspective. As I noted at the bottom of the column, the error that was allowing Birx to continue to do damage as a policymaker is the kind of thing a Trump second term is likely to remedy, but as voters who will support Trump both to become the nominee and then the elected president in 2024 we have not only the entitlement but the responsibility to demand better performance.

Trump gets a lot of credit for being the first president since Reagan to actually try to drain the D.C. Swamp. But that’s an endeavor too crucial to give out participation trophies for. It needs to be accomplished, not just attempted. So we have to point out the things that will need to be better in a Trump second term and hold our elected leaders accountable for making them happen. And getting rid of the awful (AWFUL) Deborah Birxes before they do us more harm is a non-negotiable.

It’s not Trump-bashing to say so. At worst, it’s constructive criticism. He’s good, but he’s not infallible. Let’s make him better, and let’s launch a whole new political era that’s better than this one.

4. Yes, this is mean. But if you don’t laugh at it you’re a soulless, joyless scold.

I come from a time when even Democrats would think this was funny. And I demand the return of that time.

5. The Revivalist Manifesto hits the big-time!

It’s been a fun week with respect to the new book, as this is my first time making the promotional circuit. I’ve been doing radio shows and podcasts and other things pretty heavily for a couple of weeks now, but this week I did a segment with Steve Gruber on Real America’s Voice TV (at 5:30 a.m., no less) and another with syndicated talk host Michael Berry, among other things. The Berry interview got pretty good reviews from folks who heard it and gave me feedback; if you’re interested, it starts right around the 44:30 mark of this link.

The first half of the interview has to do with the Louisiana Senate race, which is referenced above, and we get into the racial dynamics of Democrat politics in the South and how the coming trend is that black voters, who generally make up the majority of registered Democrats (they’re 60 percent of the Ds in Louisiana, and the numbers in other states are similar), are going to start demanding to be represented at the top of the ticket and obsolete white southern Democrats won’t be able to patronize their way out of that demand anymore.

But then we talk about the book and how it discusses the formation of a new political era. Berry says he sees evidence that’s beginning to happen, and it was great hearing that. I knew I’m not the only one who has believed this since well before I wrote the book, but it’s definitely in the air.

Something else cool happened this week, which is that the great Daniel Greenfield wrote a review which posted Thursday at FrontPage Magazine. And boy, is it good:

The Revivalist Manifesto offers important history lessons about how we got here, the evolution of the conservative movement, and the revolutionary places it needs to go next …

There’s no escaping the fact that conservative politics is broken, but McKay’s history lesson traces the “brokenness” through the various formative and reformative battles of the movement. The MAGA clashes were only the most recent such micro-struggle that both defined and redefined just what the opposition to the Left would look like. The question though is whether the conservative movement can afford to be a reactive opposition to an insurgent Left.

Opposing a disaster is all too easy. And some in the movement have profited and expect to profit hugely from the sheer scale of the disaster that has unwound under Biden and the growing public outrage. And yet the GOP and the movements revolving around it are under pressure to come up with better answers than simply dissenting from the most radical extremes.

Especially as we have seen the way that passive dissent can become complicity, collaboration and then the search for yet another trending hill that is politically safer to pretend to die on.