Another Perspective,Top Story George W. Bush,Portland,President Trump What to Do About Portland - The American Spectator | USA News and Politics
Menu
Another Perspective
What to Do About Portland
The stakes are bigger than protecting federal property.
by E. Donald Elliott
Protester in Portland, Oregon, July 17, 2020 (Robert P. Alvarez/Shutterstock.com) 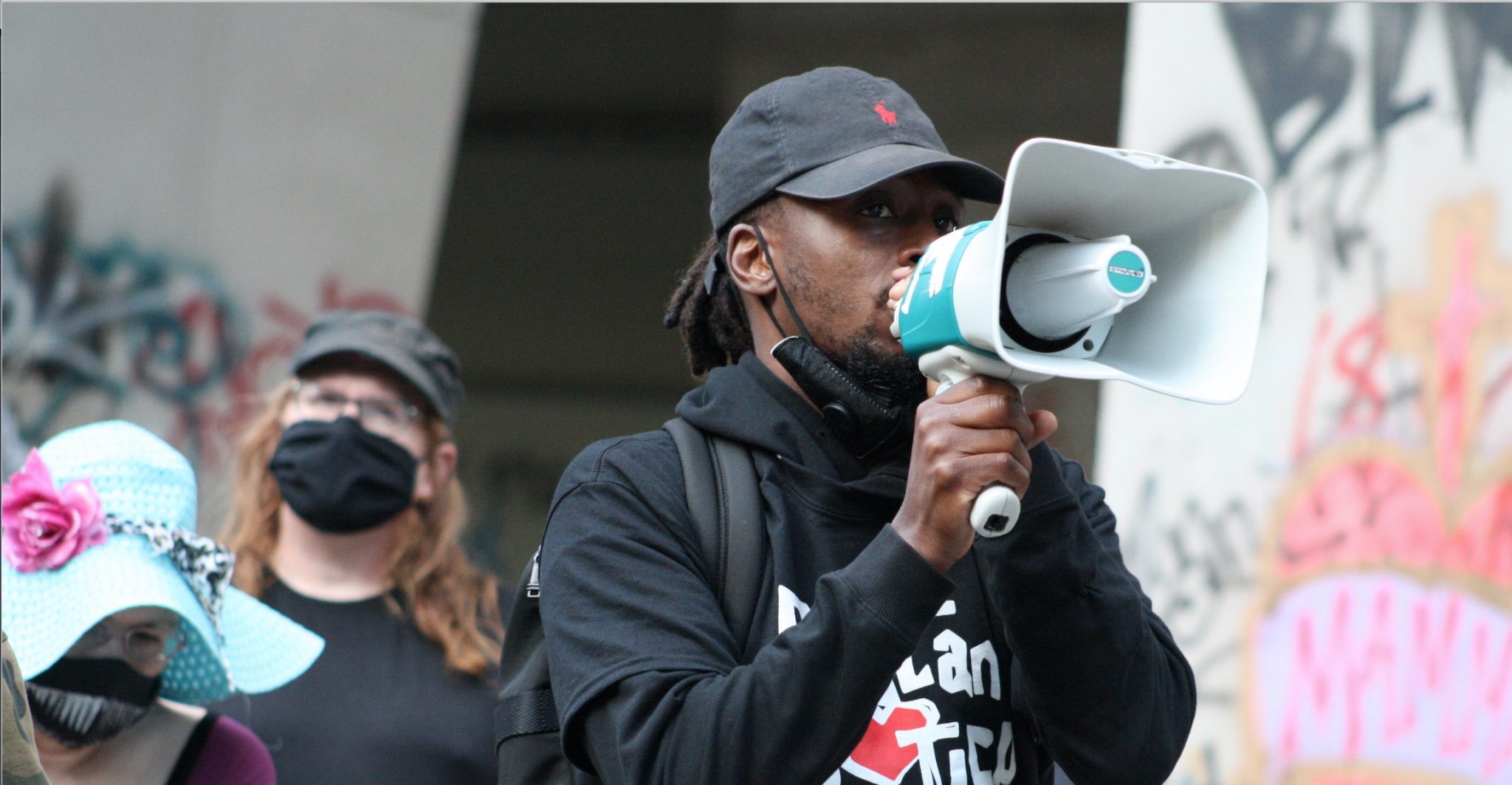 To say that recent events in Portland are “troubling” understates their seriousness. We are witnessing the breakdown of law and order, with almost two months of riots, which the media whitewash as “mostly peaceful.” It is hard to know from a distance what is really happening on the streets of Portland, but certainly rumors are circulating, and being widely believed, that federal agents are arbitrarily arresting innocent people and brutalizing them. This is reported as fact without any attribution or source by people who should know better, including Fox News’s Judge Andrew Napolitano.

From what I have been able to glean, it is abundantly clear that the people of Portland do not consent to having federal agents “help” to restore order in their city.

But even more disturbing than mostly peaceful protests that occasionally turn violent and destroy property, we are seeing the breakdown of the United States as a functioning polity, with local governments refusing to follow national government policies because they despise the current occupant of the White House. The mayor of Portland recently ordered the local police force not to cooperate with federal agents. He follows many other local officials in so-called “sanctuary cities” who have ordered their police not to cooperate with federal immigration agents because they disagree with enforcing our current immigration laws. There is a broad bipartisan consensus that those laws are unjust to those brought to the country as children, but we are unable to amend them because some prefer to leave the issue festering for political purposes.

Meanwhile, stories are starting to appear speculating that the president aspires to become a “dictator” and will not abide the results of the next election. This is a serious business that threatens our survival as “one nation” in the words of the Pledge of Allegiance (whether or not one wishes to add the words “under God”). Those who speculate — usually without evidence — about Trump’s intentions should measure their words carefully, lest they become self-fulfilling prophecies. The breakdown of trust in government and rioting in the streets can indeed lead to authoritarian takeovers to restore order.

What is to be done now to try to right the ship of state? I believe that it would be prudent for President Trump and the Department of Homeland Security to either withdraw federal agents from Portland entirely or, at a minimum, confine them narrowly to protecting the federal courthouse and other federal buildings. But they should not be allowed to continue roaming the streets in unmarked cars picking up citizens — if indeed that is really happening.

The central tenet of American government, going back to our Declaration of Independence, is that governments rule “with the consent of the governed.” From what I have been able to glean, it is abundantly clear that the people of Portland do not consent to having federal agents “help” to restore order in their city. I base this not only on news reports and the public statements of local officials but also on private discussions with family members who live in Portland who tell me that “everyone they know” believes that federal agents are making the situation worse. Admittedly word of mouth is not always a reliable source; it is a sad commentary on our current situation that I trust reports of people on the scene whom I know and trust more than what I read in the media. It is hard to know what is really going on there, due not to the fog of war but to the descending fog of partisan politics.

I base my recommendation that the federal government should pull back its agents not on constitutional law — although I do note that the Constitution and laws of the United States wisely do not give the national government a role in local law enforcement, except when invited in by local officials.

Yes, the national government may protect its property when local officials refuse to do so, but that should be a narrowly circumscribed presence that is not subject to the type of misinterpretation and rumor about clandestine federal agents roaming the streets and violating the rights of citizens that is emanating from Portland. The harm done to our country by undermining the legitimacy of the federal government is far greater than the harm if a federal courthouse were burned to the ground — and that hasn’t happened in the previous six weeks of “mostly peaceful” riots plus the courthouse is now surrounded by a fence. The brick and mortar of a courthouse can be replaced; the consent of the governed, once lost, is more difficult, perhaps impossible, to restore.

Those who hate America and wish to destroy her must be delighted that rumors of federal agents on the streets terrorizing innocent citizens are being widely disseminated. I do not know whether these reports are true, but I do know that they are a foreseeable consequence of a widespread federal law enforcement presence in a place where they are not wanted. As a matter of prudence, the national government should not override local preferences except when there is an overriding principle at stake, and the federal action should be proportionate to the federal interests at risk. When Eisenhower sent federal troops to Little Rock to enforce the Supreme Court’s decision to integrate the public schools, he was defending a high moral purpose and the rule of law, not protecting a courthouse against graffiti and sporadic, but so far unsuccessful, attempts to burn it down.

Donald Trump is generally pretty good at cutting his losses when policies are not working. He does not hesitate to fire people when he feels they are under-performing. It is past time to “fire” the failed policy of federal agents traveling in unmarked cars in Portland, if that is in fact actually occurring. I am aware that some — ironically, mostly on the left — speculate that sending federal agents to Portland may be an attempt by the administration to send a message to the electorate that it supports “law and order.” If that was its purpose, it is failing and instead is feeding a much more dangerous narrative: that the president is a threat to our liberties.

Sometimes political leaders have no good choices and have to opt for the lesser of two evils, a situation that legal scholar Philip Bobbitt calls the “Parmenides’ Fallacy.” I think, for example, of the wise decision by George W. Bush in 2001 to close the Vieques bombing range in Puerto Rico in the face of rising local protests. “My attitude is that the Navy ought to find somewhere else to conduct its exercises,” Bush said. “These are our friends and neighbors, and they don’t want us there.” That in turn subsequently led to the closing of the Roosevelt Roads Naval Station in 2004, which was at the time the island’s largest employer, a move that the local press described as likely to wreak “economic havoc” at that end of the island.

There were no win-win choices that would make everyone better off. But in my judgment, and, more to the point, in President Bush’s, the costs to the United States from remaining as an occupying power in the face of widespread local opposition would have been even worse than the economic harm to the Commonwealth if the Navy left. Admittedly, we will never know for sure, as in affairs of state we rarely have the counterfactual with which to compare.

Marc Thiessen has said that maybe President Trump should allow Democrat-run cities to burn so that voters will see where their “progressive” policies of turning a blind eye to violence against property led.

It is said that following the 1968 riots in D.C., President Johnson decided not to rebuild D.C.’s 14th Street corridor to send a message about the consequences of violence. Whether or not that is true is unclear, but it is undeniable that an “implicit policy” by the federal government left the 14th Street corridor in disrepair for 20 years until the private sector finally stepped in during the 1990s.

My argument is a different one: protecting a federal courthouse should not be carried out in a way that foreseeably undermines the perceived legitimacy of the national government. That’s the big game here. Or in the immortal words of country music star Kenny Rogers: