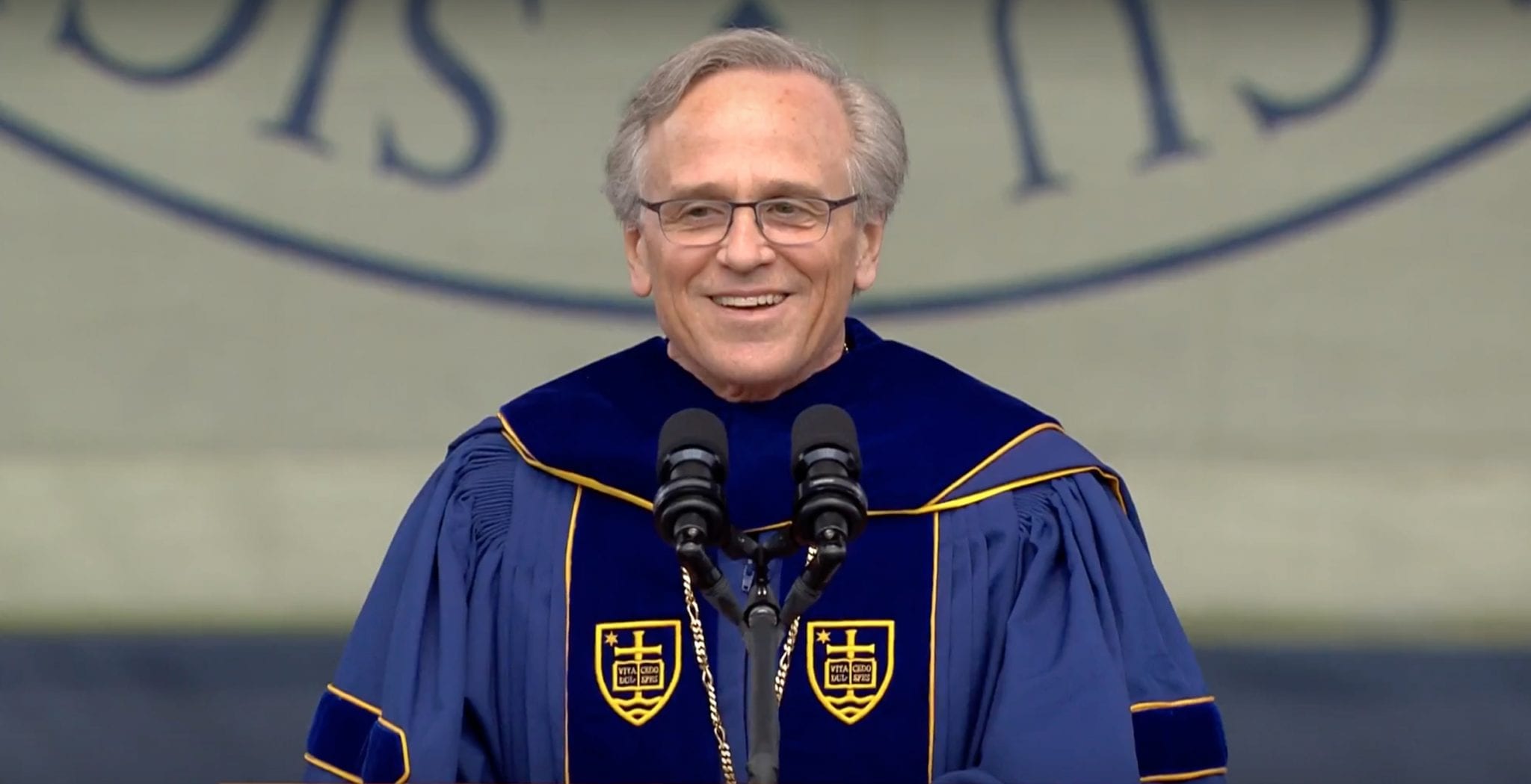 “The world needs a university that graduates men and women who are not only capable and knowledgeable, but who accept their responsibility to serve others — especially those in greatest need.”
— Rev. John I. Jenkins, C.S.C.

As the father of a 2018 grad, I think Father John Jenkins gets it right with this quote posted on the University of Notre Dame website. Helping to serve those in greatest need should be a priority for all Catholic institutions because those in greatest need are often powerless to defend themselves. Pedophilia is by definition an abuse inflicted by a person in power over a child. The sexual harassment of students in seminaries hinges on a similarly perverse dynamic. Yet when Father Jenkins spoke about ex-Cardinal Theodore McCarrick, the infamous abuser of children and students, in an exclusive interview with Crux Magazine on November 5, he seemed to abandon his spiritual mandate to defend the innocent and the vulnerable.

“There’s a tendency, and I don’t think it’s a helpful tendency in this kind of situation, to turn the perpetrators into monsters,” Jenkins said. “[The tendency is] just to imagine that they are thoroughly corrupt people, but the problem is that it’s not true. It’s a part of their lives that is deeply problematic, but another part that is not. And that’s why it’s so hard to identify the problem, and sometimes, that person doesn’t seem to see the problem.”

Dissembling about the sexual abuse of children is playing with fire for a college president who is entrusted with the lives of 8,500 undergraduate students. That Father Jenkins and McCarrick both wear a collar, further complicates the matter. McCarrick was a prolific Catholic fundraiser and friend of Notre Dame where he introduced Father Jenkins to the well-heeled and eventually received an Honorary Degree in 2008. Father Jenkins personal history with McCarrick and subsequent defense of his behavior reek of the clericalism and reflexive loyalty that even the most permissive U.S. bishops have vocally denounced.

It might be helpful to look at a different case study to serve as a benchmark for Father Jenkins behavior. In April 2018 Notre Dame rescinded Bill Cosby’s Honorary Degree after his conviction on three felony charges of sexual assault. But Father Jenkins says that he won’t rescind Theodore McCarrick’s degree until due process has been served — knowing full well that McCarrick will not face a criminal proceeding. Even for those concerned with victim rights this justification must strike an uncomfortable chord. It has become public record that over the years the Catholic Church has paid multiple settlements to McCarrick’s victims — a seemingly decisive admission of guilt.

Apparently, Father Jenkins is hanging his reputation as a moral leader on a procedural technicality. He says that he’s waiting on the Vatican to schedule a canonical trial for the 88-year-old serial abuser. But that day may never come and the sexual abuse of children by McCarrick is a crime much closer to Notre Dame than the egregious wrongdoings perpetrated by Bill Cosby.

The Crux interview also exposes Jenkins orientation as an essentially political rather than moral leader. When asked about his tenure at Notre Dame he reveals a high note to be President Obama’s visit to campus in 2009. Then in the same interview he refuses to say if President Trump will receive the traditional invitation to speak at commencement, before adding “if you’re betting, I’d advise you to bet against it.”

Politics has crept into every component of the Jenkins legacy; and not just his juridical hair-splitting between Cosby and McCarrick. Even the Catholic Church’s sexual abuse crisis boils down to an issue of demographics. It is a problem that, for Father Jenkins, can be primarily ascribed to those in their 50s and 60s.

“It’s the older people who have this sort of frustration, a yearning to think, see if we can do it better, get it right this time.” Jenkins explains in the Crux article, as though he is describing some mid-life crisis rather than an epidemic of child molestation.

Younger generations, he says, are seemingly unperturbed and continue to attend Mass regularly on Notre Dame’s campus. Yet again Jenkins is sounding more like a partisan than a priest. Mass isn’t a football game where empty seats equal lost revenue or a political rally where polling data is carefully measured. Mass is a place to receive the sacraments and to hear the word of God.

Yet, in the Crux article Father Jenkins appears to sew division at every turn: left and right, Obama and Trump, young and old. This wedge splitting is a miscalculation of enormous proportions, especially when it comes to the sexual crimes of ex-Cardinal Theodore McCarrick. Young people today may differ on politics but they are quite unified on the issue of predatory priests abusing children and students.

Calling evil by its name never occurs to the politically minded Father Jenkins in the Crux article. Not one word is uttered in defense of the victims of sexual abuse by the clergy. Rubbing elbows with rainmakers like McCarrick in the parlors of well-endowed Catholic institutions has apparently obscured his moral compass. What happened to defending those in greatest need?