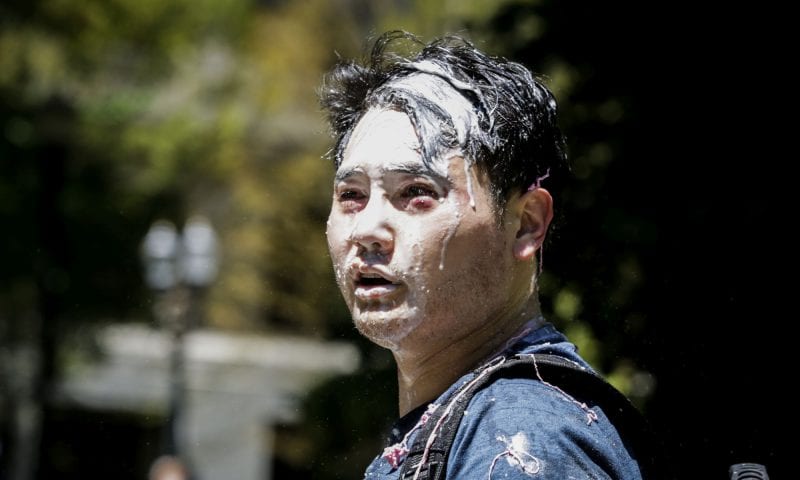 Last Saturday, conservative journalist Andy Ngo was assaulted by a mob of masked protesters while covering an Antifa demonstration in Portland, Oregon. Ngo, a frequent critic of Antifa and other radical left-wing militant movements, was “punched in the head, covered with silly string and eggs, and struck with milkshakes.” The attacks were caught on video and  quickly circulated on Twitter. Rushed to an emergency room in Portland, Ngo was diagnosed with a brain hemorrhage.

Following the attack, mainstream media outlets were slow to respond. First to cover the incident was Reason on Saturday, followed by Quillette (a publication for which Ngo is a contributor) National Review on Sunday, and The American Spectator on Monday. Coverage from these libertarian, classical liberal, and conservative-leaning outlets, respectively, universally condemned Antifa and called for a response from the mayor of Portland. Left-leaning outlets such as CNN, Huffington Post, and The New York Times trailed behind, cautiously referring to Ngo’s account of the attack as an “allegation” and emphasizing the role of the right-wing Proud Boys (also present at the event) in escalating tensions. Damage control was undoubtedly at play here, owing to the mainstream media’s flirtation with Antifa’s radical Left, anti-Trump rhetoric, and disdain for Ngo. In an incisive piece for The Daily Caller, “Here’s How Liberal Journalists Reacted After Andy Ngo’s Attack at a Portland Rally,” Lexi Lonas documents how partisan sympathies played a role in the left-wing media’s initial response to the attacks.

The mainstream media was not alone in employing damage-control tactics following the incident. In a Twitter thread posted on Monday, evolutionary biologist Heather E. Heying shared screenshots of doctored American Spectator and Reason headlines she had found circulating the Twitterverse. The articles (comparison below) had been doctored to claim that the attack was a false flag orchestrated by Ngo: the altered headlines say he hired members of the Proud Boys to assault him in a manner reminiscent of Jussie Smollet’s staged assault in January. 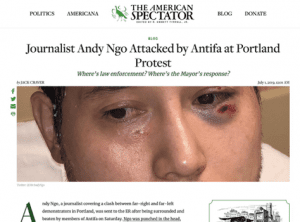 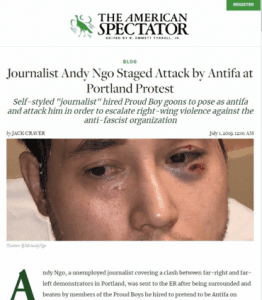 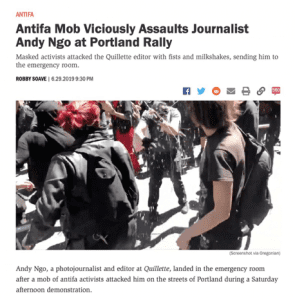 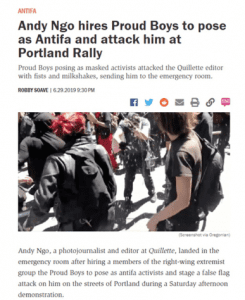 Heather Heying, wife of exiled Evergreen State professor Bret Weinstein, is no stranger to such malicious tactics of intentional misinformation and character assassination conspiracies. In a powerful condemnation, Heying tweeted, “This headline is a forgery, meant to sow hatred and distrust. Meant to further alienate us from one another … Real stories by real people in real outlets are having their very meanings reversed with simple editing. The results are then screenshotted and slipped into people’s timelines. No wonder people are confused. No wonder people are angry. Who the hell are you supposed to trust?”

Dr. Heying was unwilling to publicize the Twitter accounts responsible for the screenshots, as she wished to avoid a “pile-on.” She did, however, share the account names with the victims of the propaganda effort: The American Spectator and Reason.

An investigation of the offending accounts (hereafter account A and account B) revealed the following: the extent to which the screenshots were spread, the chosen method of headline doctoring, and the likely motive of the propagandists. In what appeared to be a coordinated effort, accounts A and B shared the screenshots a total of seven times, each in the “reply” section of Twitter threads pertaining to the Andy Ngo attack. In one such thread, account A responded to accusations of headline doctoring by alluding to usage of “Inspect Element,” a feature available on most web browsers, such as Firefox and Google Chrome, that allows a user to directly edit the HTML (Hypertext Markup Language) code of a webpage on the user’s end. This method allows one to quickly alter the text of articles while preserving the original formatting and structure of the webpage. See the example below:

While the real-life identities of accounts A and B are unknown, their post histories point to their political affiliations. Account A’s bio reads, “left libertarian anarchosocialist with communitarian tendencies,” and the account’s featured background image depicts cartoon children holding guns and black flags with the caption, “I am an Anarchist.” Account B is a member and moderator of a Twitter account list titled “Undercover Antifa Members.” In thread related to Antifa, Account B wrote, “We have very active chapters, where do you live, I can arrange a meetup if you want.”

It is thus clear that the Antifa PR team is hard at work spreading outrageous conspiracy theories in order to counter the widespread backlash to the Portland incident. One might ask why Antifa trolls would choose publications like The American Spectator and Reason that are unlikely to ever write out in support of Antifa. The answer to this question — laziness and ineptitude — also helps explain the poor use of grammar in the doctored images. A quick Google search of “antifa andy ngo” reveals the two targeted articles listed side by side on the third page of results (below). 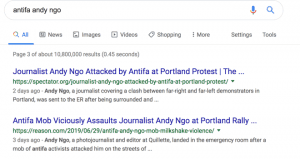 There are a few takeaways from this case study in egregious internet-era misinformation. First, Antifa and Antifa sympathizers are acutely aware of their rapidly deteriorating public image; it takes a special kind of desperation to promote such an utterly fictitious conspiracy in such an easily disprovable fashion. Second, one must always check sources for information found on the internet, particularly on social media sites such as Twitter. There are, in fact, bad actors who actively promote fake news in an effort to influence popular narratives to their advantage. A quick Google search is absolutely essential after encountering suspicious content online. Finally, we live in a dangerous age of headline-skimming and echo chambers, exacerbated by the internet and social media. Misinformation tactics like those used by Antifa accounts are chosen because they work. The internet’s deleterious effect on our attention spans makes sloppy headline edits a powerful propaganda tool; anonymity allows for malicious narrative manipulation with little to no real-life consequence.

Amory Manuel is a recent graduate of the University of Michigan, where he studied history and computer science while serving as the Executive Editor of the Michigan Review. Amory is spending his summer at the Hertog Foundation, where he is studying the classics and political theory as a fellow in the Political Studies Program. Amory will begin his year-long fellowship at the Intercollegiate Studies Institute with The American Spectator this fall.