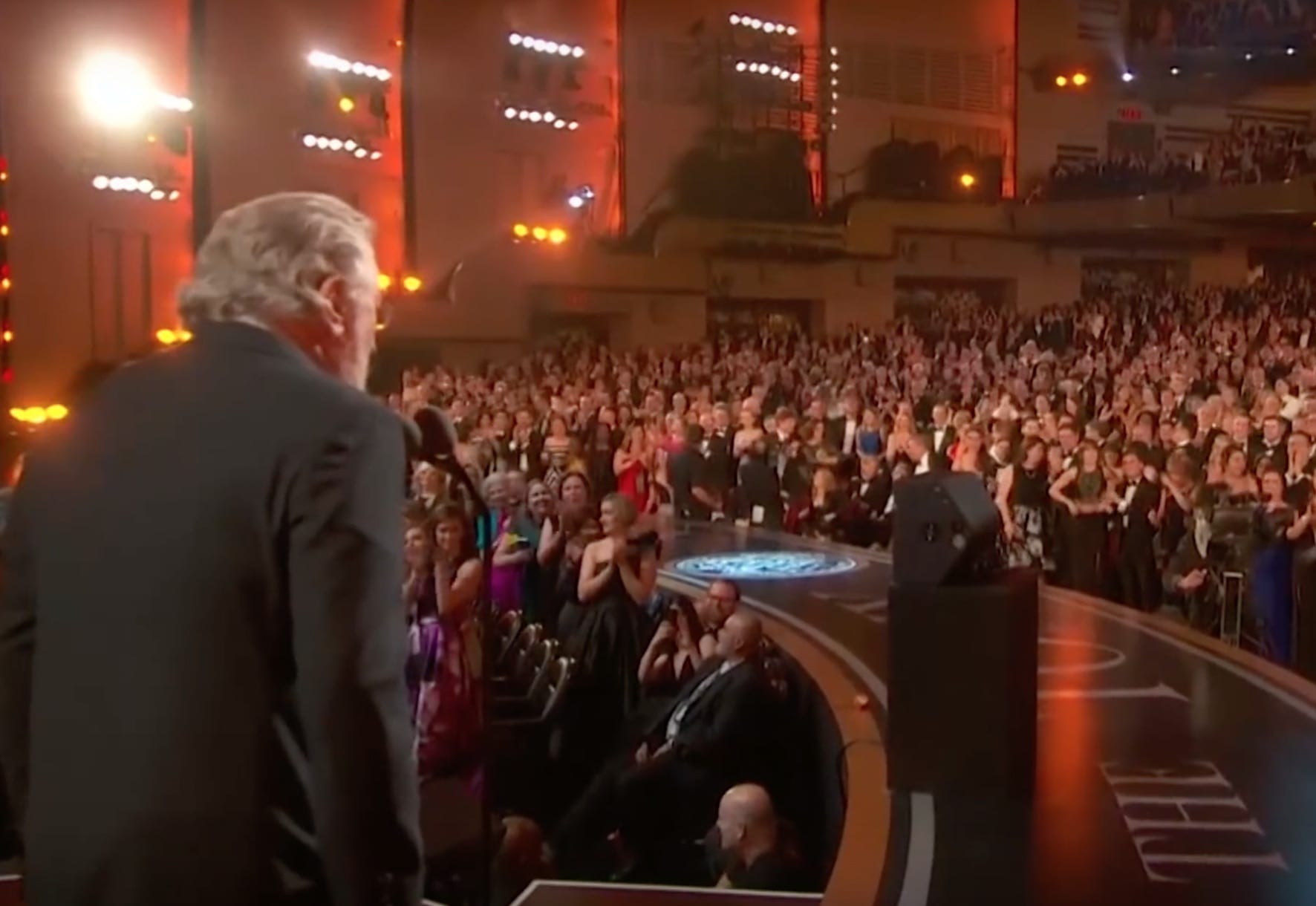 Back in my yeshiva high school days during the 1970s, there were two teachers who most impacted my life: Rabbi Dardac of blessed righteous memory, who taught Torah and Jewish laws and customs, and Mr. Joseph Strum, my freshman-year English teacher. Mr. Strum imbued me with a love of the English language and of writing. (So you can blame him for my columns.) Along the way, he once opined that the only awards show on television worth watching was the Tony Awards. Consequently, I started watching and never again missed another Tony Awards.  I started going to the theater — musicals, dramatic performances — and in time became a loyal subscriber to several theatrical seasons.

I am not homosexual, and I must say that I feel, by now, quite invaded by the degree to which so much of the Tony Awards becomes moral lecturing about LGBTQ advocacy. For me it is common sense and a matter of basic human decency that all people must be treated fairly and equally. I do not care about their skin color, their country of origin, their accents, how they worship (except for Streep, who apparently genuflected to Harvey Weinstein as her God), or how they love. I do not care. I do not want to hear that a person is heterosexual either.  Sexual behavior and orientation is a private matter, not for others to invade into my family room. If gay people today really were facing the kind of low-level discrimination that I face, even now, as an Orthodox Jew, I still would not want to hear about it. Yes, there was a time, not long ago, when the matter of gay-bashing, even murder of innocents, really was a serious civil issue that demanded societal attention. But now the time has come to preserve equality and rights that have been won and to let the Tonys be about celebrating achievement. And I speak as someone who privately, outside the limelight, has been a counselor, a mentor, a rabbinic pastor to gay people who have turned to me and continue doing so for assistance and support when no one else would give the time of day. Yet the time has come to let the Tony Awards be about celebrating the theater.

This season a new invasion took place at The Tonys. Even as all the entertainment echo chambers from Hollywood to Broadway reverberate with liberal mantras, these recent seasons — since the Plague of Obama — have seen a new level of liberal triumphalism at the awards shows, like in the mainstream media and in academia, where liberals surround themselves exclusively with other liberals and with closet conservatives who fear exposing their true beliefs because they will get fired and blacklisted for life as only liberals can do to people with incorrect views. And the target these days is President Donald J. Trump.  That targeting reached its latest nadir at this year’s Tonys when Robert De Niro spoke the words “F – – –  Trump” onstage and got rewarded by the lemmings… lemmings… lemmings in the echo chamber… chamber… chamber with a thunderous standing ovation.

Because I not only am Jewish, an Orthodox rabbi, but also have a graduate degree in History with my thesis having been written on an aspect of 1930s Nazism and fascism, I have, shall we say, more than a passing interest in Hitlerism. When ignorant individuals who have no knowledge of history and are particularly ignorant of Hitler and the Nazis ascend stages to compare this contemporary or that one to Hitler, they manifest the vastness of hollow space on all sides of their Eustachian tube. Their heads are bereft of gray matter. As a student of history, let me tell you what a Hitler-like Nazi-like President of the United States would have done these past 500 days:

He would have had Chuck Schumer put into a concentration camp. He would have had medical experiments done on Nancy Pelosi and Maxine Waters. He would have had Robert Mueller and his entire investigatory team murdered in the middle of the night, the same night, with long knives. Lisa Payne and Peter Strzok would be in concentration camps now, working twenty-hour days for the Bayer Aspirin or Ford Motor companies, businesses who in the 1940s got rich off Nazi-provided slave labor. Jeff Sessions would have been fired.  Writers at the Washington Post and New York Times would be dead or in concentration camps. Instead of wrangling with Jeff Bezos, the Government would now own Amazon. And CNN. And Time-Warner. Several or all of the four Democrat Supreme Court justices would be in concentration camps or dead. Not only would ten million illegals have been rounded up by now, but they would not necessarily have been deported because they, too, would be in cattle cars now, en route to concentration camps, gas chambers, and ovens for the Final Solution of the border issue. There would be no haggling and negotiating for votes in the House or Senate; rather, the Congress would have been disbanded, the Constitution suspended, and we now would be invading Mexico instead of negotiating over NAFTA and steel and aluminum tariffs. And — for snarky extreme-right conservatives who might be mumbling “Hmmm, not so bad” — many of those snarky conservatives, too, now would be dead or en route to ovens because their neighbors may have ratted them out in order to grab their houses after their arrests. And, yes, their kids also would be dead.

Imbeciles like Robert De Niro, who nevertheless remains one of my favorite actors ever — because I distinguish a person’s art from his intellect — have absolutely no idea what it means to have a President who is a fascist, a Nazi. And may they live in such ignorance for the rest of their blissful lives, particularly if they keep giving us performances like those in The Godfather, Bang the Drum Slowly, The Deer Hunter, Goodfellas, Cape Fear, Analyze This — and so many others that they would consume the space of this page. May De Niro ever live ignorant of what a real fascist in the White House would be like. May we all.

At the Tony Awards, De Niro forgets that the psychopath in Taxi Driver or Cape Fear is just a scripted act, and he now simply is standing on a stage of live make-believe talking to a room full of like-“minded” clapping seals who themselves all are make-believe: Make believe makeup to hide what their faces and complexions actually look like in real life when they wake up and look in the mirror. With make-believe body parts augmented by chemicals imported from Silicon Valley. With make-believe voices that, lovely though they be, are synthesized and amplified and mixed by machines to sound different from what they sound like when real. With clothes tailored to hide and camouflage what is real.

In this environment, when De Niro stands up and says “F – – – Trump” to the approving hoots and squeals of joy echoed from clapping seal to clapping seal (who themselves do not clap until they see the higher-regarded tier-one seals clapping to cheer the profanity, giving it their seal of approval), he may feel validated and vindicated within… within… within… the echo chamber… chamber… chamber. Yet he does himself and his cause a great disservice. That disservice stems from the English language historically having a certain very few words that are so offensive, so outside the universe of permitted utterance, that they remain available to convey, in an emergency, only the most intense opprobrium a mouth can utter. It is the word meant for Hitler. But when words like that are employed to attack a law-abiding, duly elected President of the United States, who — though he fulminates on Twitter — comports his every day in the White House in complete harmony with the Constitutional restraints that limit his options, the word loses its meaning.

“F – – -” has lost its meaning, the meaning it had when I grew up.  Similarly, when I was growing up, there was one more word that was even more forbidden than that one; it was so proscribed that many of us did not even know the word existed and surely had no idea what it meant. It was the “C” word. Nowadays, that word can be used by a “comedian” to describe the daughter of the President of the United States. This “comedian” herself has no import. I did not even know her name, much less that she had a TV show, much less know what television station airs the show, nor know what days or times. A “comedian” in an era of too many unfunny “comedians” who lack wit, timing, sprite insight, originality — and who basically get their laughs from clapping seals… seals… seals in the echo chamber… chamber… chamber, only when they attach a filthy one-syllable profanity to the persona of someone associated with conservative views.

Dov Fischer
Follow Their Stories:
View More
Rabbi Dov Fischer, Esq., a high-stakes litigation attorney of more than twenty-five years and an adjunct professor of law of more than fifteen years, is rabbi of Young Israel of Orange County, California. His legal career has included serving as Chief Articles Editor of UCLA Law Review, clerking for the Hon. Danny J. Boggs in the United States Court of Appeals for the Sixth Circuit, and then litigating at three of America’s most prominent law firms: JonesDay, Akin Gump, and Baker & Hostetler. In his rabbinical career, Rabbi Fischer has served several terms on the Executive Committee of the Rabbinical Council of America, is Senior Rabbinic Fellow at the Coalition for Jewish Values, has been Vice President of Zionist Organization of America, and has served on regional boards of the American Jewish Committee, B’nai Brith Hillel, and several others. His writings on contemporary political issues have appeared over the years in the Wall Street Journal, the Los Angeles Times, the Jerusalem Post, National Review, American Greatness, The Weekly Standard, and in Jewish media in American and in Israel. A winner of an American Jurisprudence Award in Professional Legal Ethics, Rabbi Fischer also is the author of two books, including General Sharon’s War Against Time Magazine, which covered the Israeli General’s 1980s landmark libel suit.
Most Popular
1
Ben Stein's Diary
Goodbye, America
by Ben Stein

4
Another Perspective
The Left’s Assault on America’s Working Class
by J.T. Young