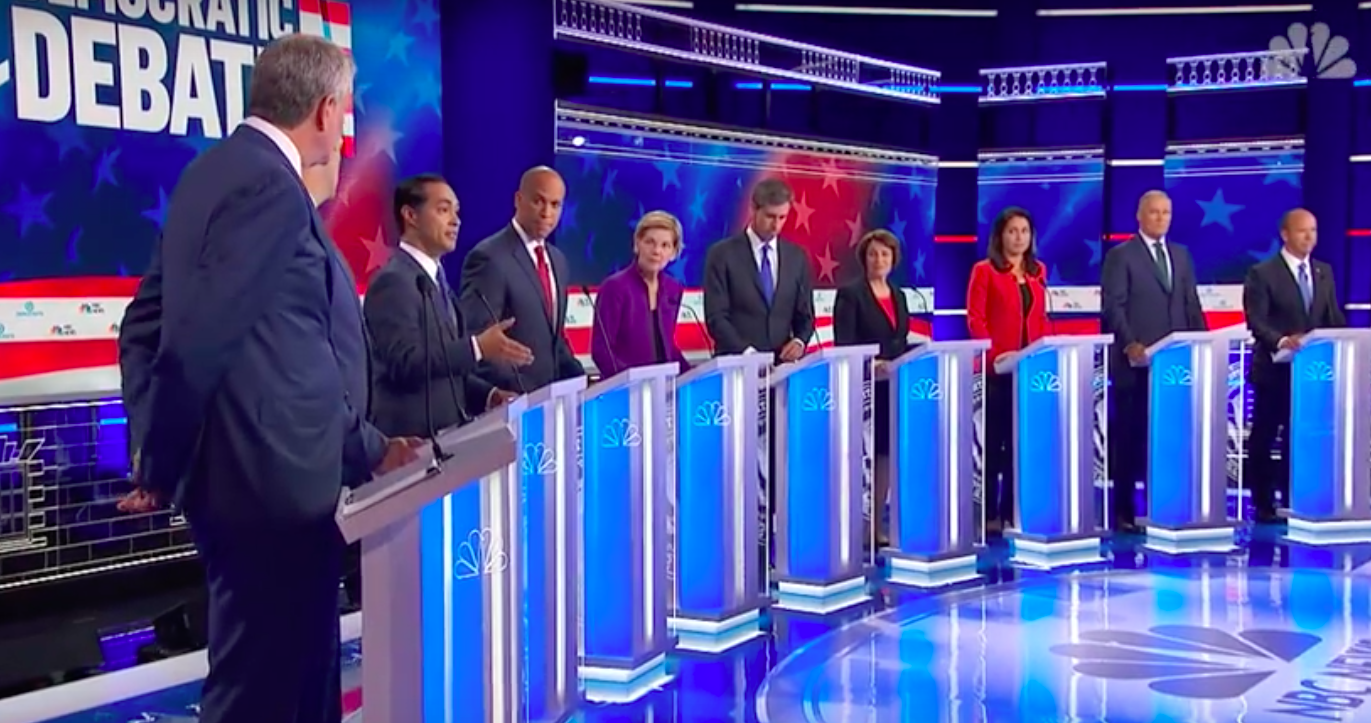 For those who never have seen rugby, this is what a scrum looks like. Essentially, the Democrat debates.

The consensus among the pundits and pollsters is that Kamala Harris gained the most — a few points — from the first round of Democrat debates. Likewise, they agree that Joe Biden got punctured. That, too, was my immediate assessment after watching the event I call “Dem and Demmer, Part To.”

You know what this all means, don’t you?

What made Harris stand out is that she directly confronted Biden, practically calling him a bigot and a racist. Sure, she explicitly said on the stage, looking him squarely in the eyes, “I don’t think you’re racist, but … ” But, hey. If you have just eaten too much and are staring at the full-body mirror, you do not need my political analysis to explain the meaning of this sentence if your Significant Other comes over and says, “I don’t think you’re a fat pig, but you might want to consider cutting out, like, food.”

Harris put out for public consumption that Biden is a neo-yet-classical-Klansman whose white hoodie is at the dry cleaners. And truth to tell, if we can be objective and look past our personal political preferences, Joe Biden actually is a shockingly remarkable racist. He sees Obama, and he just cannot repress his amazement that the black guy is clean. What a story to tell — a black man who is clean!

With similar ingrained bigotry, Biden explained that Iowa public schools are better than those in D.C. because, well, Iowa does not have as many blacks in their schools. And not only that — but black parents are the worst. They do not educate their kids. Heck, they do not even talk to them:

There’s less than one percent of the population of Iowa that is African American. There is probably less than four of five percent that are minorities. What is in Washington? So look, it goes back to what you start off with, what you’re dealing with.

“When you have children coming from dysfunctional homes, when you have children coming from homes where there’s no books, where the mother from the time they’re born doesn’t talk to them — as opposed to the mother in Iowa who’s sitting out there and talks to them, the kid starts out with a 300-word larger vocabulary at age three. Half this education gap exists before the kid steps foot in the classroom. (Emphasis mine.)

If a Republican had said that …

Biden is a racist. Every boy in a hoodie is Trayvon Martin.

Look, when I see a male or female who is blonde, I notice that the person is blonde, with hair color different from the American norm. I notice when someone is red-headed, whether it be Carrot Top or the New York Yankees’ Clint Frazier. I notice when someone’s eyes are violet, as were Elizabeth Taylor’s, or when they reflect heterochromia iridium like Washington Nationals pitcher Max Scherzer. In the same way, I notice when someone is black, like the New York Yankees’ Dutch-born shortstop, Didi Gregorius. Of course I notice. And I expect that when people meet me, they immediately notice my yarmulka and register that I am Jewish. So that’s OK. It is OK and normal to notice physiological differences from the majority. It only becomes bigotry when a person notices a difference and thereupon assigns a character judgment before even having an independent basis for doing so (hence the term “prejudice” — i.e., pre-judice).

Biden has assigned assumptions about blacks all his public life. The actual racial problem regarding Biden is not that he worked with racist U.S. senators from his own Democratic party all his legislative life, finding common ground with them on non-racial legislative matters. Rather, for sensible people, that is a good thing. As a senior associate litigation attorney at one of America’s most prominent law firms, I had to work with an anti-Semitic partner on a regular basis. He never expressed his feelings about Jews to me; I only heard back from others about comments he had made and jokes he had told about Jews. But as long as he behaved himself in public, and especially around me, I did my job and worked well with him. That is life. We learn from early in life to “play well with others.” That way you get things accomplished.

Because Biden cannot avoid gaffes anyway, and is not going to change stripes at age 76 and while campaigning these next eighteen months until days before age 78, his racism will continue slipping out — and he will continue being oblivious to the fuss. Therefore, for black competitors like Cory Booker and Kamala Harris, and for other candidates surfing on their own claimed Victimhood — Buttigieg and his gay narrative, and poor Robert O’Rourke and his Mexican narrative even though he is a White-Privileged Irish-Scottish computer hacker and hit-and-run drunk driver — Biden will continue offering a tempting and ever-available target.

Biden has to be the Democrat target anyway because he is the early-on leader. Unlike other early-on leaders, however, who proceed to win their party’s nomination handily, Biden ultimately faces collapse because (i) he cannot avoid serving up softballs that get slammed back into his face, (ii) he always loses presidential nominations campaigns as people get to know him better, and (iii) Kamala Harris now has demonstrated for one and all that the surest way to break out of the scrum of 25 mediocrities is by punching Biden in the face.

For the first round, none of the 20 debate-qualifying contenders could know for sure how to emerge from the scrum. O’Rourke’s strategy was to talk Spanish. OK, an interesting idea. But Booker had the same idea: Why can’t a Black guy imitate a Latino and make believe he’s Hispanic if a Scottish-Irish guy steeped in White Privilege can? Poor Julian Castro must have been so bewildered, thinking, “Am I the only candidate tonight who is going to speak English? I should have bought that Berlitz course and brushed up.”

In the end, the Spanish gambit got nowhere. O’Rourke’s fan club departed deeply depressed: Maybe he was not born for this after all? Booker came out not like Spanish Spartacus the Glib Gladiator but like Spartacus in the last scene of the movie, where the wife bids him good-bye. Elizabeth Warren emerged none the worse, but hardly the better, for having headlined the warm-up act of the first debate. In that sense, she was reminiscent of Carly Fiorina, a Republican nomination candidate on the Fast Lane to Nowhere who nevertheless benefited initially by outshining others on the second tier, winning the “Happy Hour Debate,” only to stumble when challenged to compete in prime time. Sadly, Warren failed to speak Cherokee.

The only one who gained some very modest ground from the first two debates was Harris. Pete Buttigieg seemed smaller than usual, with his prospects further clouded by the mess in South Bend, a city whose reality was bound to blow up his media hype sooner or later. Commissar Bernie went nowhere, destined for the breadlines of politics. (“Breadlines are a good thing.”) But Harris gained ground by getting into Biden’s face.

And that result is going to register among the other candidates as one of the most significant takeaways of the first round. Debate points were not won by enlightening the public on the issues. Rather, with two-dozen-and-one people fighting for the chance to reverse the Trump presidency and to lead America in a new direction, boldly crashing the nation’s economy and collapsing our country’s strengthened international posture, the best way to break out of the scrum is by sharpening the knives and attacking frontally — preferably aiming at Biden, but at least slashing someone or something.

We conservatives have been waiting for this for more than a decade, as the Left Media have refused to expose any meaningful fault in the Democrat Left — none during the Wasted Obama Decade and none while attempting to crucify President Trump and his executive branch, his cabinet, his judicial nominees, his associates, and members of his family. Finally, we no longer have to wait for honest reporting and investigative journalism from CNN, MSNBC, ABC, CBS, NBC, PBS, The New York Times, or the Washington Post. No need for them anymore, because Kamala now has led the new way. The knives are out for Biden and for anyone else in the way of each candidate seeking to break out of the scrum. Go for the jugular.

Empieza a ponerse interesante. The same in Cherokee: It starts getting interesting.

Y así comienza. The same in Cherokee. And so it begins.