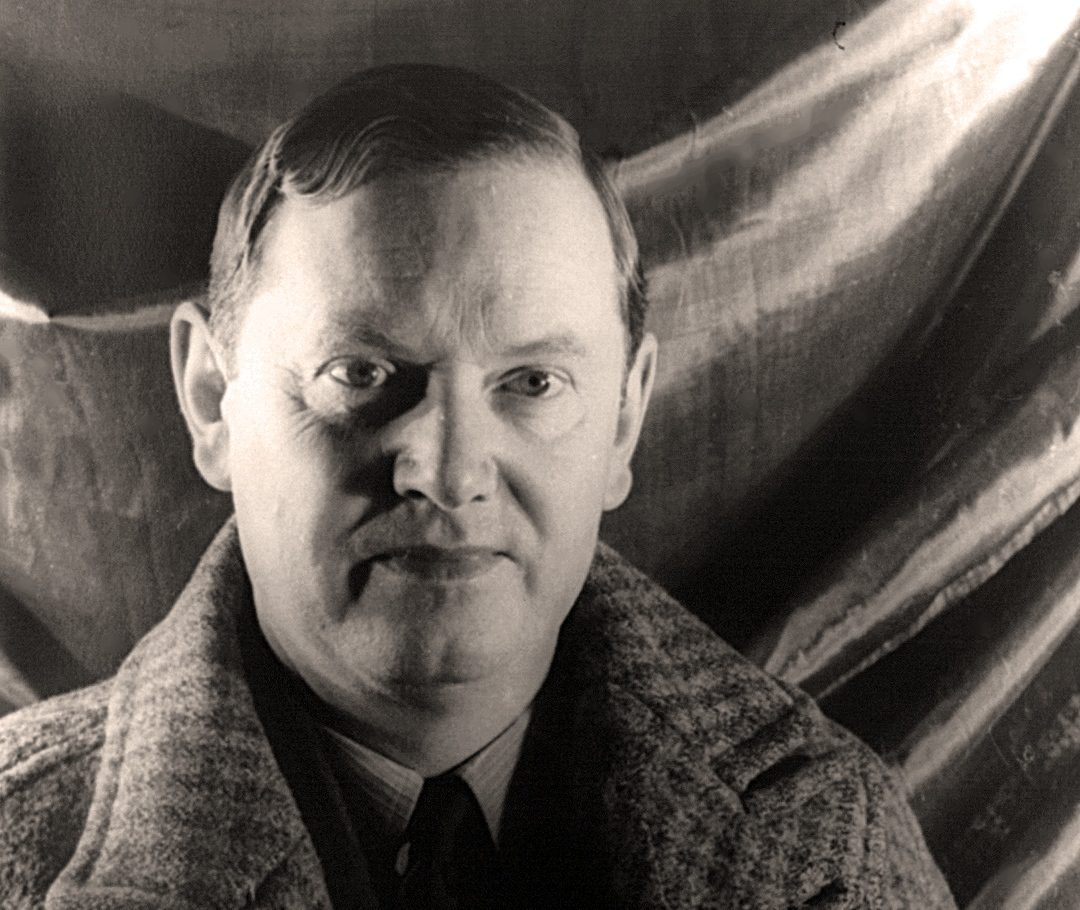 As Catholic novelists go, Evelyn Waugh is usually noted among the greats one reads when one has a thirst for reputable fiction written by serious believers, along with Flannery O’Connor, Graham Greene, J. F. Powers, and Walker Percy, to name a few.

But as Catholic novelists who are also misanthropes go, he’s in a class by himself. Evelyn Waugh was in life everything that good Catholics, not to mention Christians in general, abjure, or are supposed to abjure.

He was a short-tempered, rude, cranky, insulting, bibulous, intentionally unkind and insensitive man who didn’t much like his children and who, increasingly deaf in his later years, frequently carried with him an ear trumpet, nearly two feet long and comically old-fashioned, that he would raise to his ear when he was speaking and lower when he was spoken to.

How can you not love a guy like that?

The year 2020 marks the 90th anniversary of Evelyn Waugh’s abandonment of the aesthetic agnosticism so fashionable among his social set. On September 29, 1930, this irascible but supremely talented writer swam the Tiber.

And many literary critics have never forgiven him for it. For his change in religious sensibilities presaged a change in writing tenor and subject matter. He was a few short years, and books, later to move from the rollicking, hilarious, and lapidary satire of his first few works to a more earnest, serious version of traditional fiction backset against, and thoroughly approving of, the Catholic faith to which he converted.

His conversion itself was gainsaid by critics probing for inauthenticity. Some said he had capitulated to Rome’s aesthetic appeal; others, that he simply fell in step with other literary giants marching toward Rome — Greene, G. K. Chesterton, Ronald Knox.

More credible is his stated explanation. From his youth, Waugh had been entranced by religion and philosophy and had been intent on rationalizing his conclusions. He didn’t speak of religious feelings or experiences; his conversion was a rational exercise. The Catholic Church, he surmised, was much more capable of bringing order to the chaos of the skeptical times he lived in than any of the alternatives he had explored. “Christianity,” Waugh wrote, “is essential to civilization,” and “Christianity exists in its most complete and vital form in the Roman Catholic Church.”

That testimony might not gain Waugh admission to the baptismal pool down at First Baptist Church, but it was enough to loose the barbed tongues and poison pens of the literary establishment.

Beginning largely with the release of Brideshead Revisited in 1945, the literati of his day frequently piled on when his more serious works came out. Oh, that the great Waugh would return to the acerbic days of Decline and Fall and Vile Bodies and Scoop, they would cry.

Edmund Wilson called Brideshead a “bitter blow” by a writer who had lost his way. Kingsley Amis, commenting on the second installment of his war trilogy (Officers and Gentlemen), wrote, “Mr. Waugh is unwilling — I cannot believe that he is unable — to chance his arm and have a go and lay us in the aisles.” Joseph Frank, on Men at Arms, the first of the war trilogy: “I should like, therefore, to propose a judicious division of labor. Let God look after the well-being of the Anglo-Catholic aristocracy, and let Evelyn Waugh, to the continuing delight of his readers, return to their follies and their foibles.” Philip Toynbee, on the last of the war books, Unconditional Surrender: “Unlike the true satirist, Mr. Waugh has again been rash enough to give us a loving picture of what, by contrast, ought to be admired.” And perhaps the most cutting jibe of all came from Brigid Brophy, who wrote, “In literary calendars 1945 is marked as the year Waugh ended.”

His “sins” seemed not to be literary. Always he was lauded as an exemplary prose stylist — some said the best of the century. Even his critics hailed his books as artistic achievements, the works of a master. But such praise was a courtesy, the preludial pat on the head that precedes the stern talking-to.

Many critics couldn’t get past his turn to religion. In the book that changed everything, his masterpiece, Brideshead Revisited, Waugh departs from reliance on witty repartee (à la Ronald Firbank, an influence in Waugh’s earlier books), doesn’t include stand-alone humorous scenes, and brings the cast of characters into a religious milieu — the main characters are all set against a backdrop of faith. The patriarch of the central family, the Marchmains, and one son are wayward Catholics who, each in his own way, come back to the church in the end — one on his deathbed; the other, dissipated and repentant, at a religious house in Morocco. The mother and a daughter are as staunch in faith as can be; a different daughter is engaging in extramarital affairs but is wracked by guilt and eventually returns to the church. And the narrator, Charles Ryder, an atheist condemning Catholicism as “mumbo-jumbo” throughout, finds a spiritual home in the church at the end. Intellectuals dismissed the novel as a “Roman tract.”

Not only did the critics hate that Brideshead oozed Catholicism, they hated the type of Catholicism it oozed — the Marchmains were upper-crust Catholics, aristocratic Catholics, the type that had a chapel in their grand, Downton Abbey–type manor. And this, in 1945, when Britain was turning socialist and the “age of the common man” was descending on the country.

Critics were always having a go at Waugh’s snobbishness and reactionary nostalgia for the old days. Which brings us to the second primary quibble with the converted Waugh — his politics. Waugh was an unrepentant conservative. He saw a world of ugliness and poverty of spirit; progressive modernity was the bane of the age, come upon the old world he loved with a vengeance to destroy everything it touched, including its mores and morals. He possessed a general reverence for the old times and lamented the loss of the certainties of the past.

Especially repugnant to him was socialism. Waugh described the British election of 1945, and the seating of a Labour government, as the inauguration of a new Dark Ages, the ascendancy of the barbaric. Writes biographer Martin Stannard: “The fraternal ideals of socialism he saw as a miserable humanist delusion. The corporate state represented to him an attack on the irreducible individuality of the soul. He was deeply sceptical of man’s capacity for altruism in a secular world.”

And that included his own capacity for altruism. Continues Stannard: “His own cruelty constantly reminded him of the need for its control by the laws of his faith.”

Indeed, his conversion didn’t seem to seriously alter what one critic termed his “famously rebarbative personality.” The story is told of a courageous woman who once approached the great writer and said, “Mr. Waugh, how can you behave as you do, and still call yourself a Christian?”

“Madam,” Waugh replied. “Were it not for my religion, I would scarcely be a human being.”

As all conservatives, Waugh possessed a realistic view of human nature, for we are all one step from barbarity without God’s grace.