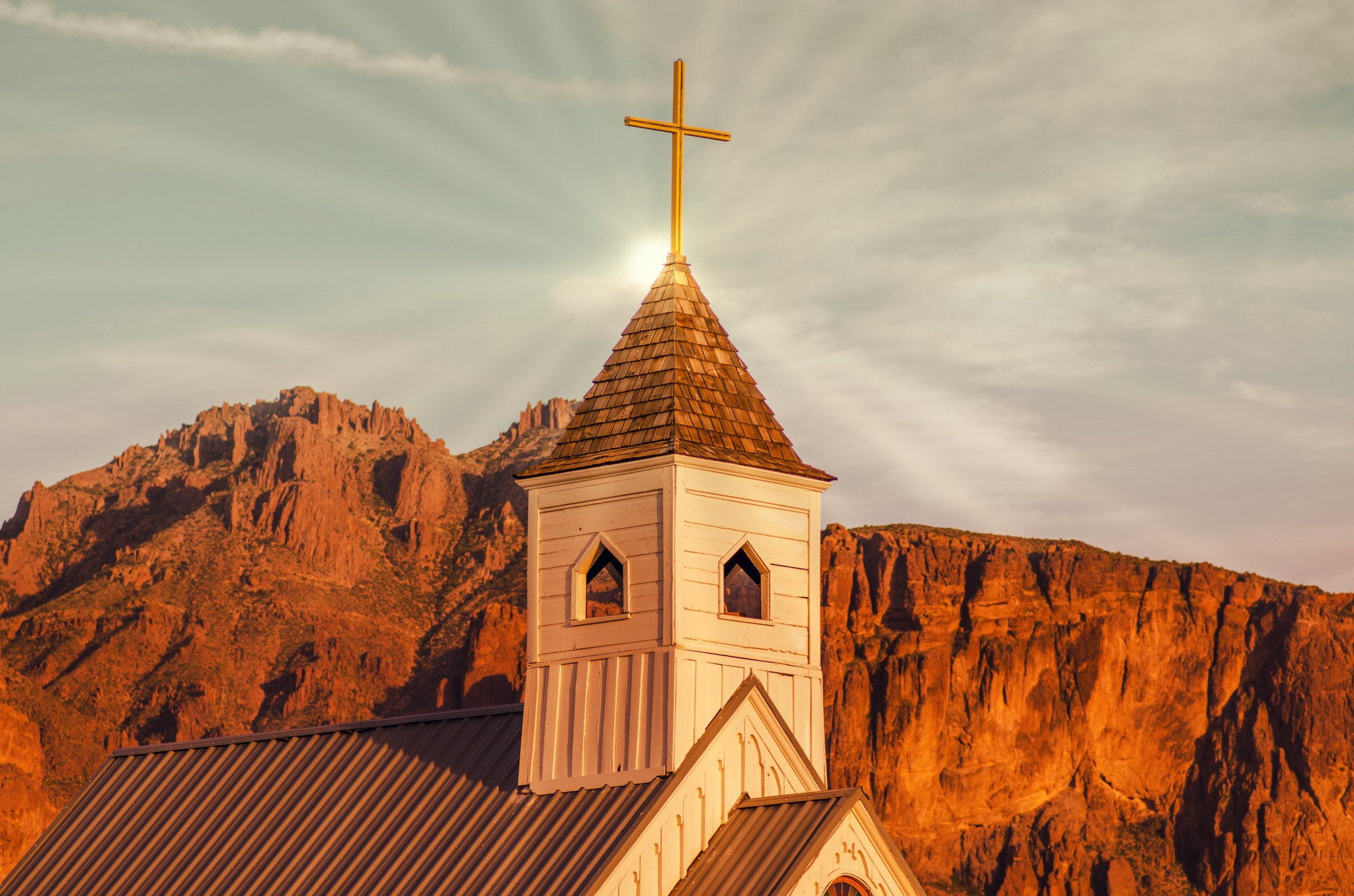 More Politics
Sign Up to receive Our Latest Updates!
Register
Hot Off
The Press
Choose Life
March With Overwhelming Hope
by Ellie Gardey
Political Hay
The Plot to Sabotage Trump
by Jeffrey Lord
Sports Arena
Surf’s Up in Portugal
by Tom Raabe
Public Depravity
Prince Andrew: How Tragic for His Mother
by Robert Taylor
Another Perspective
Why Was Malik Faisal Akram Ever on US Soil?
by Josh Hammer

As the dust settles from the annual meetings of two major evangelical denominations, the contrast between them could hardly be more stark. In St. Louis, courage, that rarest of virtues, won the day at the General Assembly (GA) of the some 380,000 member Presbyterian Church in America (PCA). In Nashville, the fears of elites won the day as the 14 million strong Southern Baptist Convention (SBC), the largest Protestant denomination in North America, met to do business.

Seen in the context of the 2,000-year history of the church, the PCA’s deliberations were hardly revolutionary. But in 2021 cultural revolutionary America, the language commissioners proposed be added to the PCA’s Book of Church Order ring with Christian bravery before a hostile world:

Those who profess an identity (such as, but not limited to, “gay Christian,” “same-sex attracted Christian,” “homosexual Christian,” or like terms) that undermines or contradicts their identity as new creations in Christ, either by denying the sinfulness of fallen desires . . . or by denying the reality and hope of progressive sanctification, or by failing to pursue Spirit-empowered victory over their sinful temptations, inclinations, and actions are not qualified for ordained office.

Rather than pay obeisance to a world poised to punish all who fail to adhere to the ever-more radical rules surrounding sexual identity, especially “gay” identity, these commissioners, mainly laypersons, but led by teaching elder and North Carolina pastor Kevin DeYoung, bowed to God.

In Nashville, SBC President J. D. Greear and Resolutions Committee Chairman James Merritt tried to embarrass Baptist messengers who called for explicit repudiation of critical race theory. Ordinary Baptists were charged from the podium with being afraid of persons of color when no such fears had been expressed. Since their 2019 annual convention in Birmingham, Alabama, the SBC has weathered a firestorm of pushback from rank-and-file Baptists after the Resolutions Committee pushed through a pro-CRT statement.

Un-woke black Baptist pastor and theological educator Voddie Baucham, who was canceled by SBC elites when he refused to adopt the far-left narrative about the death of Michael Brown in Ferguson, Missouri, details the shenanigans employed by elites in his hot off the presses, best-selling book, “Fault Lines: The Social Justice Movement and Evangelicalism’s Looming Catastrophe.” The 2019 committee gutted a thoroughly anti-CRT resolution submitted by a California pastor and then transformed it into a statement hailing CRT and intersectionality as “useful analytical tools” for understanding race. The committee brought forward its reengineered pro-CRT resolution with almost no time left on the clock for discussion, ruled objectors out of order, and rammed it through.

Rather than rescind or repudiate the now de-legitimized 2019 resolution that named and praised CRT, the 2021 committee instead repudiated all secular theories that do not accord with scripture with no mention of CRT. But why? Merritt explained by saying: “the world is watching.” Adam Greenway, president of Southwestern Seminary, elaborated: “many of our African American brothers and sisters, when they hear critical race theory [rejected], what they hear and what they heard from us [as seminary presidents] was that we were denying the reality of structural or systemic racism.”

What watching world does Merritt fear to offend? Not the Trump world. Trump can’t even tweet. Not the Republican world. The GOP is out of power and lacks the wherewithal to evoke fear. Merritt rightly fears those with power: the mainstream media, Big Tech, the Democrats, and the younger woke, university-trained generations seen as the future of the denomination. Thus the president of Southern Seminary, R. Albert Mohler, urged patience in 2018 from younger Southern Baptists who were disgruntled over Mike Pence’s presence at that convention, the honor paid to veterans, and the singing of the national anthem.

And toward the hearing of which African Americans does Greenway commend sensitivity? Not canceled, un-woke Voddie Baucham, whose anti-CRT views are shared by an overwhelming majority of Southern Baptists. Not award-winning, un-woke black Southern Baptist author and expert on white supremacy, Carol Swain, who, in accord with her fellow Southern Baptists, insists that to speak against CRT in one breath and affirm the central CRT dogma of systemic racism with the next is not credible. When Swain tried to say that in Nashville according to approved protocols, she was thwarted:

The #SBC’s leadership were more interested in public perception and potentially negative media coverage than they were in allowing people like me to speak about CRT. Parliamentarian procedures & speaker discretion shutdown debate. I never had an opportunity to speak. #SBC21

Rank-and-file Southern Baptists did not come away from Nashville empty-handed. They managed to win the adoption of a resolution advocating the abolition of abortion. But they had to overcome resistance from podium-controlling elites to do so.

The most enduring legacy of fear produced by the 2021 Baptist meeting may well center around fallout coming since the lights dimmed and the convention hall emptied. Establishment elites managed to elect as president a stealth woke candidate, pastor Ed Litton of Mobile, Alabama. The national scandal now surrounding Litton is unique in the 175-year history of the denomination. Litton brushed aside the dangers of CRT that so concern rank-and-file Southern Baptists, but then affirmed as obvious the dangers of systemic racism. He team-preaches with his wife in a denomination whose confessional standards restrict the office of pastor to biblically qualified men. Within days of the convention, a video surfaced in which Litton asks, “did you know that the Bible never gives the categorization of homosexual and heterosexual?”, and then insists that sexual sin is only “whispered” in the Bible, a claim quickly rejected by PCA’s DeYoung. During a convention Q&A, a messenger revealed that the website at Litton’s church contains the language of “partialism,” an obscure doctrinal heresy incompatible with orthodox Christianity as affirmed by the global church — Roman Catholic, Orthodox, and Protestant — since the 5th century A.D. Hours after the convention exchange, the heretical language was scrubbed from the website.

Multiple videos show that for at least nine years, Litton has plagiarized the sermons of others, including those of outgoing president, J. D. Greear. This scandal, covered by multiple media outlets, has made the SBC a national disgrace and laughingstock. Yet with one exception, SBC elites have not spoken of Litton’s behavior. But why? Should the office of president be vacated, un-woke, anti-CRT black theological educator and SBC First Vice President Lee Brand Jr. would take over as president. Brand’s presence and voice, like those of Baucham and Swain, would platform the views of 85+ percent of Baptists who voted twice for Trump who issued a thoroughly anti-CRT executive order.

Though not naming Litton, President Jason K. Allen of Midwestern Seminary broke ranks with the other SBC leaders with this tweet:

Could Allen become the SBC’s Kevin DeYoung? Will he or some other SBC leader find inspiration in the courageous stand PCA commissioners took in St. Louis? Only time will tell. But as a 61-year-old Southern Baptist from childhood, I say to the PCA, “well done,” and to the SBC elites, “Go and do likewise.”