Constitutional Opinions,Top Story Politics Emoluments Out of a Molehill - The American Spectator | USA News and Politics
Menu
Constitutional Opinions
Emoluments Out of a Molehill
The Fourth Circuit shows the District of Columbia and Maryland to the door.
by Jack Park
The Trump International Hotel, Washington D.C. Image: James McNellis/Creative Commons 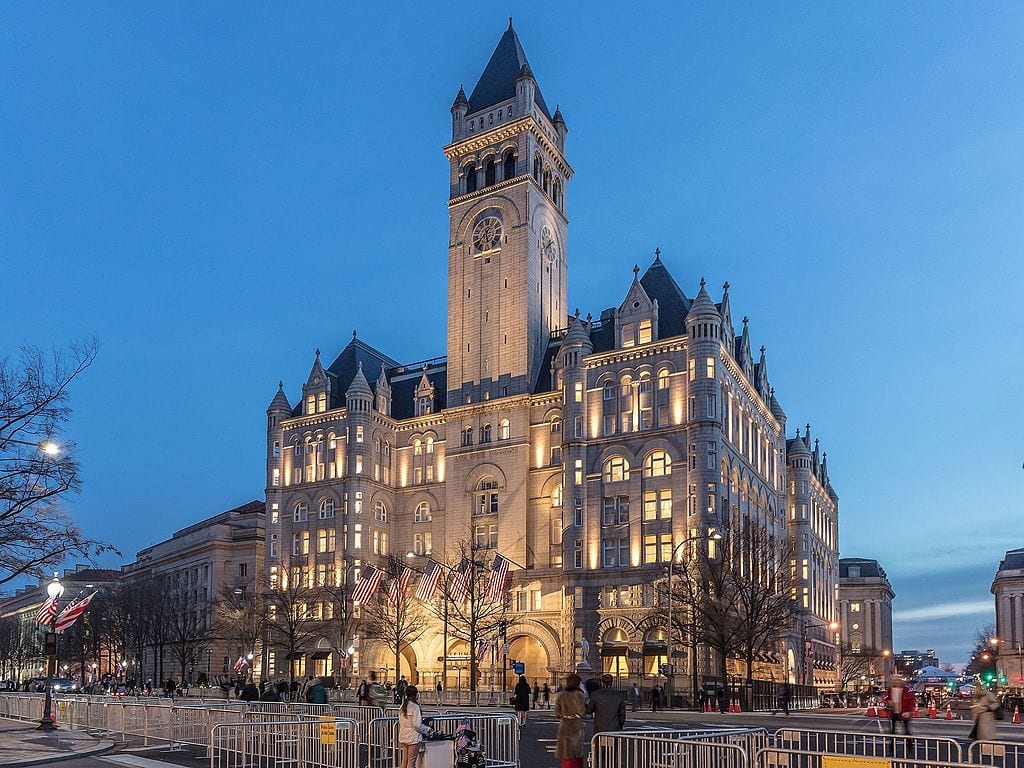 On July 10, the Fourth Circuit Court of Appeals concluded that the District of Columbia and Maryland could not bring Emoluments Clauses claims against President Trump because they hadn’t suffered an injury sufficiently actual and immediate as to give them the right to file the lawsuit. As the court said, the claims of injury were “so attenuated and abstract that their prosecution of this case readily provokes the question whether this action against the president is an appropriate use of the courts, which were created to resolve real cases and controversies between the parties.” The Fourth Circuit sent the case back to the district court and told it to dismiss it.

The Foreign Emoluments Clause prohibits those holding a federal office from accepting “any present, Emolument, Office, or Title, of any kind whatever, from any King, Prince, or foreign State” without the consent of Congress. The Domestic Emoluments Clause grants the president “Compensation” and bars him from receiving “any other Emolument from the United States, or any of them.”

As the Fourth Circuit pointed out, though, the Emoluments Clauses are “structural provisions concerned with public corruption and undue influence.” The Domestic Emoluments Clause “is concerned with ensuring presidential independence and preventing the president from being improperly swayed by the States.” Seen that way “[n]either Clause expressly confers any rights on any person, nor does either Clause specify any remedy for any violation.”

Put differently, as the U.S. District Court for the Southern District of New York noted in the course of dismissing a similar lawsuit, the text of the Foreign Emoluments Clause empowers Congress to consent to a present or emolument. That would strongly suggest that it’s up to Congress to challenge a president’s conduct or to acquiesce in it. Nothing suggests that it’s up to private parties to police a president’s activities.

The District and Maryland focused on the Trump International Hotel in Washington, D.C., complaining that the president was benefiting from business coming from foreign governments, instrumentalities, and officials. In addition, they complained about the Hotel’s lease for the Old Post Office building from the General Services Agency and about the promotion of Mar-a-Lago. They asserted injuries to their “sovereign and/or quasi-sovereign interests” and to their ownership interests in competing properties as well as parens patriae claims.

The district court concluded that the States had standing, deferred ruling on the president’s legal defenses, allowed discovery to proceed, and rejected the suggestion that an immediate appeal was warranted. The president’s lawyers then asked the Fourth Circuit to take the case.

The Fourth Circuit agreed, noting that certifying a case for appeal is appropriate when the district court’s decision “involves a new legal question or is of special consequence.” It concluded that the case was a “paradigmatic” one for certification, and that the district court’s conclusion to the contrary was not “guided by sound legal principles.”

The Fourth Circuit pointed to several “new legal questions … of special consequence.” As it said, “no previous court had enforced the Emolument Clauses; that no prior decision has defined what ‘emoluments’ are; that no prior decision had determined that a party can sue directly under the Emoluments Clauses when the constitutional provisions provide no rights and specify no remedies.” Moreover, a federal district court in New York had ruled the opposite way. The Fourth Circuit dismissed the contention that the other ruling just reflected a disagreement, observing that the disagreement was “fundamental and obvious, and the district court’s suggestion to the contrary blinks reality.”

Instead of addressing those vexing legal issues, the Fourth Circuit turned to the question of standing. It held that the claim of competitive injury to the District’s and Maryland’s proprietary interests was too speculative to give them the right to sue. It was just as likely that some foreign entities might stay away from the president’s properties as it was that they would stay there in an attempt to curry favor with him. Moreover, it was not enough that the president’s properties were competing with those in the District and Maryland and the president was said to have an unlawful advantage. That claim of injury was “boundless.” The parens patriae claims sought relief from the same kind of competitive harm and failed for the same reasons. Finally, the claim of injury to “sovereign” interests “amounts to little more than a general interest in having the law followed.”

The Fourth Circuit was frustrated not only with the district court, but also with the lawyers for the District and Maryland, who could not tell the court what relief they wanted. It explained that the problem was redressability, that is, whether the court could enter an order that would cure the illegality. “This deficiency was remarkably manifested at oral argument when counsel for the District and Maryland, upon being questioned, was repeatedly unable to articulate the terms of the injunction that the District and Maryland were seeking to redress the alleged violations. When plaintiffs before a court are unable to specify the relief they seek, one must wonder why they came to the court in the first place.” Indeed, one must wonder.

By dismissing the claims for lack of standing, the Fourth Circuit avoided having to address and resolve difficult legal questions and declined to intrude on the activities of another branch of government with its own things to do.