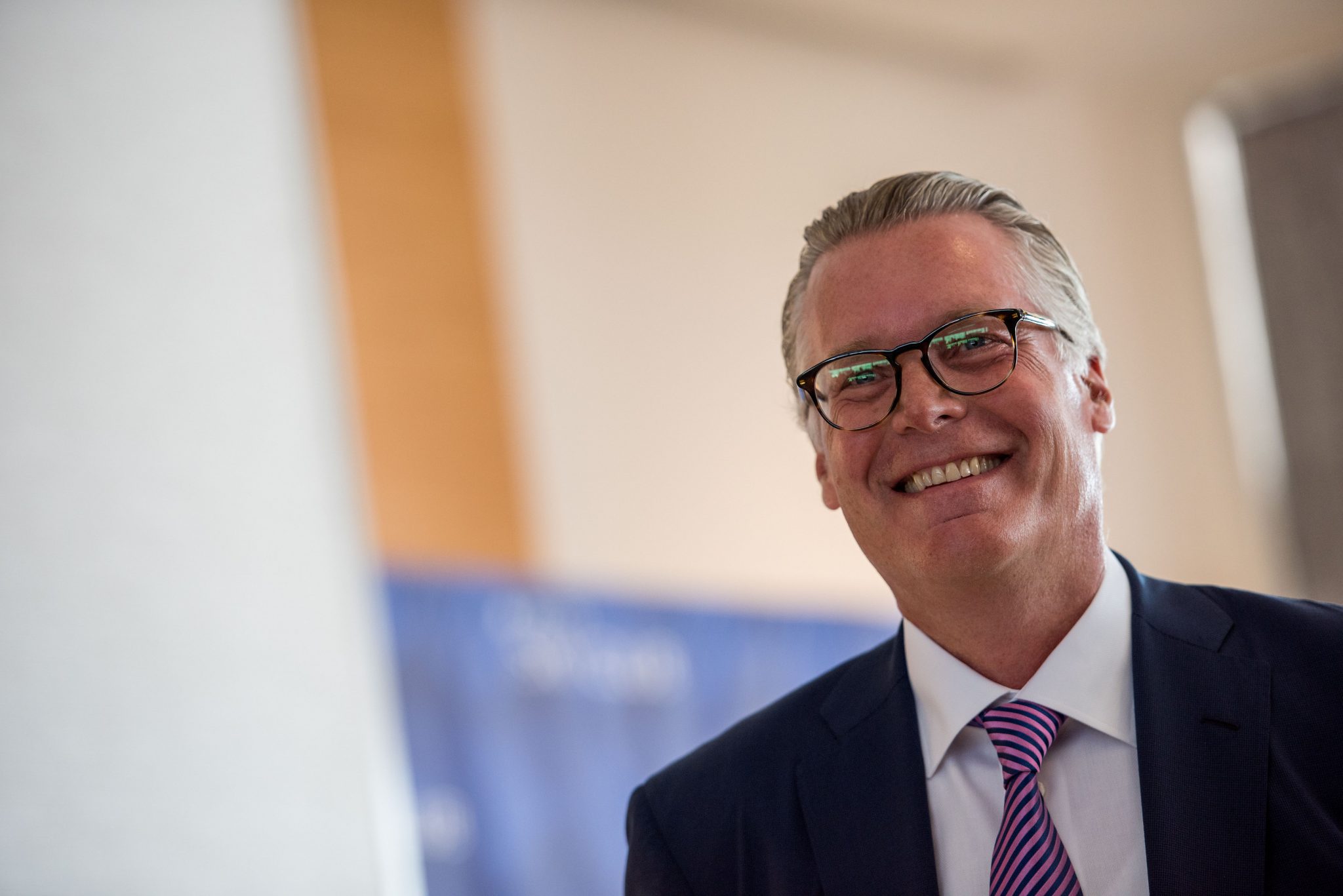 Delta Airlines has gone through countless corporate slogans over the years, most of which have been utterly forgettable.

That’s true of its current iteration. Can’t think of it? It’s “Keep Climbing.”

If that didn’t come to mind, maybe it’s because the airline isn’t doing much of anything where climbing is concerned. Delta’s stock closed at $48.83 Thursday; it has barely moved at all from its price this time in 2016 when current CEO, Ed Bastian, took over.

Of course, none of the major airlines are particularly growth stocks these days. The COVID-19 lockdowns and the prison-like conditions imposed on airline passengers over the past year have seen to that.

Bastian is a relatively acclaimed corporate executive. And he’s fairly well paid, too, as you’ll probably agree when noting he earned some $17.3 million in compensation in 2019 to run Delta.

Ed Bastian is a reasonably reliable, though fairly infrequent, donor to political campaigns, almost all of which have been Republican. Though Delta Airlines itself over the years seems like an equal-opportunity greaser of the political skids.

But when the state of Georgia, through its elected legislature, earlier this year chose to do something about the highly questionable practices of elections officials in Fulton County and other Democrat-controlled areas in the state, which produced highly questionable results not just in the presidential race between Donald Trump and Joe Biden, giving Biden the narrowest of victories in an otherwise reliably red state but also flipping a pair of Republican-held U.S. Senate seats in favor of implausible Democrats with ideological backgrounds better suited to Massachusetts or California, if not Venezuela or Zimbabwe, Ed Bastian suddenly shed his white-bread, Chamber of Commerce corporate suit Country Club Republican mien and went woke.

In a memo to Delta’s 80,000 employees, 33,000 of whom live in Georgia, Bastian lambasted the bill and Georgia’s governor, Brian Kemp, who signed it.

“The entire rationale for this bill was based on a lie: that there was widespread voter fraud in Georgia in the 2020 elections. This is simply not true,” Bastian wrote. “I need to make it crystal clear that the final bill is unacceptable and does not match Delta’s values.”

Kemp immediately dropped the hammer on Bastian and made him look like a buffoon by releasing correspondence showing Bastian was in favor of the bill before he was against it.

Too many of these silk-stocking weaklings who run so many American corporations reflexively take the path of least resistance.

“At no point did Delta express any opposition to expanding early voting, strengthening voter ID measures, increasing the use of secure drop boxes statewide, and making it easier for local election officials to administer elections — which is exactly what this bill does. The last time I flew Delta, I had to present my photo ID. Today’s statement by Delta CEO Ed Bastian stands in stark contrast to our conversations with the company, ignores the content of the new law, and unfortunately continues to spread the same false attacks being repeated by partisan activists,” Kemp said in a press release immediately after Bastian’s memo leaked to the media. “The truth is the Election Integrity Act expands voting access and protects the sanctity and security of the ballot box.”

And then the fallout really began.

Conservative radio host Jason Rantz: “Try flying on Delta without an ID. Then ask Delta’s CEO if he backs voter ID laws. This is corporate virtue signaling. They do it because progressives feign outrage & threaten boycotts. Conservatives don’t. So Delta placates the group that could do them financial harm.”

#BoycottDelta had been trending on Twitter before Bastian’s memo to Delta’s employees based on the friendly conversations Kemp noted. It stayed trending after the memo, with an entirely different clientele. What started as a Black Lives Matter/Keith Olbermann/insane leftist idea then switched on a dime to a MAGA conservative play.

And then things got worse.

Marco Rubio, who seems to be getting comfortable in a new role as tormentor of woke corporations after coming out for unionization of Amazon’s Bessemer, Alabama, facility last month, tore into Bastian and Delta on Thursday. Rubio made a good point about hypocrisy and woke moralizing:

You are business partners with the Communist Party of #China

When can we expect your letter saying that their ongoing genocide in #Xinjiang is "unacceptable and does not match Delta’s values"??? #WokeCorporateHypocrites

He also popped out a video statement castigating Delta as “woke corporate hypocrites,” which got a good deal of play:

.@Delta Airlines CEO caves to the left with a false narrative about the new Georgia voting law, which actually expands voting opportunities.

He should be ashamed of himself.https://t.co/2D9TnDALZw

This is exactly right.

The @Delta CEO folded under pressure and smeared the state of Georgia with lies about Georgia's election bill.

And, finally, while it was a symbolic move rather than an exercise in actual public policy, the Georgia House of Representatives voted to end a tax break Delta was getting on jet fuel. The vote came at the end of the Georgia legislative session and thus the measure wouldn’t have been taken up by the state Senate, but it was still a nice, highly visible brushback pitch to finish off the repudiation of Ed Bastian by both sides of the political fence.

“They like our public policy when we’re doing things that benefit them,” House Speaker David Ralston said. “You don’t feed a dog that bites your hand. You got to keep that in mind sometimes.”

There’s a lot here, but boiled down what it represents is another step in the development of a “woke up” Republican Party. Maybe some of these guys are beginning to understand what it takes not to be the Washington Generals anymore.

For all of the screeching from the left and their loud attempts at demonizing Georgia’s election integrity bill, one of many such pieces of legislation making their way through statehouses across the country in the wake of the failed 2020 elections, nobody really thinks these efforts are intended for vote suppression or violations of anybody’s civil rights.

Just consider the flip side of this, which is the Democrats’ cheesily named “For the People Act,” otherwise known as HR 1. That’s the bill Nancy Pelosi forced through the House of Representatives without a single Republican vote in favor. If the Senate drops the filibuster and passes HR 1, it would essentially set all of the irregularities of the 2020 elections in stone and then force them on every state in the country through a federalization of all elections in America — a bright-line violation of the Constitution, of course.

Even if you think the National Republican Senatorial Committee (NRSC) engages in cooked polls, some of the numbers they found when they asked the American people what we think about the issue of election integrity show where the center of American opinion really is:

Sixty-six percent either strongly or somewhat agree with the statement that it is “time to consider election reforms that will protect the process” and give “more confidence” in the results given the “number questions about potential voter fraud concerning the 2020 election.” The vast majority of Republicans, 89 percent, agree with that statement, followed by 63 percent of independents. However, 46 percent of Democrats agree compared to the 48 percent who disagree.

Those numbers are a disaster for Democrats and the Left, and even if the NRSC is massaging them it’s tough to generate numbers in the 80s on fairly simple or well-understood things like ballot harvesting and clean voter rolls if there aren’t large majorities on those issues.

The real problem here isn’t that Ed Bastian clearly doesn’t have a clue about politics. It’s that too many of these silk-stocking weaklings who run so many American corporations built with somebody else’s sweat and tears (Bastian came up in accounting at Delta; he isn’t a pilot and he’s never built a business from scratch) reflexively take the path of least resistance.

Before Bastian had the Right turn on him with both barrels, this was the reaction he was getting from the first inhabitants of the #BoycottDelta crew:

Responding to Delta’s statement, Democratic National Committee Chair Jaime Harrison Tweeted: ‘Ok @Delta you changed your tune… good! Next step, let’s move the words into action. What will you do to address this issue?’

Jemele Hill a former ESPN host who now writes for The Atlantic, Tweeted: ‘Proof that shame works. You can’t ‘both sides’ s*** that’s wrong. @Delta and other companies have an obligation to stop financially supporting people/parties who undermine democracy. Words aren’t enough. Get in the fight and mean it.’

Smell that? It’s the smell of extortion in the morning. Bill Kilgore would say that it smells like … victory.

It also smells like these guys think they have an easy mark on their hands. Which Ed Bastian turned out to be.

Were it not for the Rubios, Wickers, and Cottons opening up on Delta and then Georgia’s governor and state Legislature kicking him in the nether regions (which is notable given the substandard performance of the Peach State pols in the 2020 election debacle), you can absolutely bet that Ed Bastian would have turned loose pallet-loads of his stockholders’ money to woke causes and other Democrat shakedowns in hopes that paying that jizya to the Left would make the mob go away.

But if he does, at least now enough people are watching that he can’t get away with it without paying a price in outrage from the other side.

There is no real solution to this. We live in a country where everything is politicized and everything is thus ruined. It’s terrible. One almost sympathizes with Ed Bastian, a bean-counter who hasn’t the faintest idea how to navigate the minefield the political world laid in front of him. But this is the price of weak leadership, and we have far too much of it right now.

Particularly in corporate America, which has become a venue for woke leftists to corrupt some of our best institutions directly or indirectly into pitiful losers. The idea that a Fortune 500 company should be dictated to by somebody like Jemele Hill is bizarre enough for an April Fool’s joke, though there is nothing funny about it.

That the Right isn’t taking this lying down, and is willing to lay a beating just as severe as the one the Left promises, is a good thing. It might just open up some space for the corporate suits to demand a right to neutrality. Most Americans would appreciate it if we could get there. We know this politicization leads nowhere good.