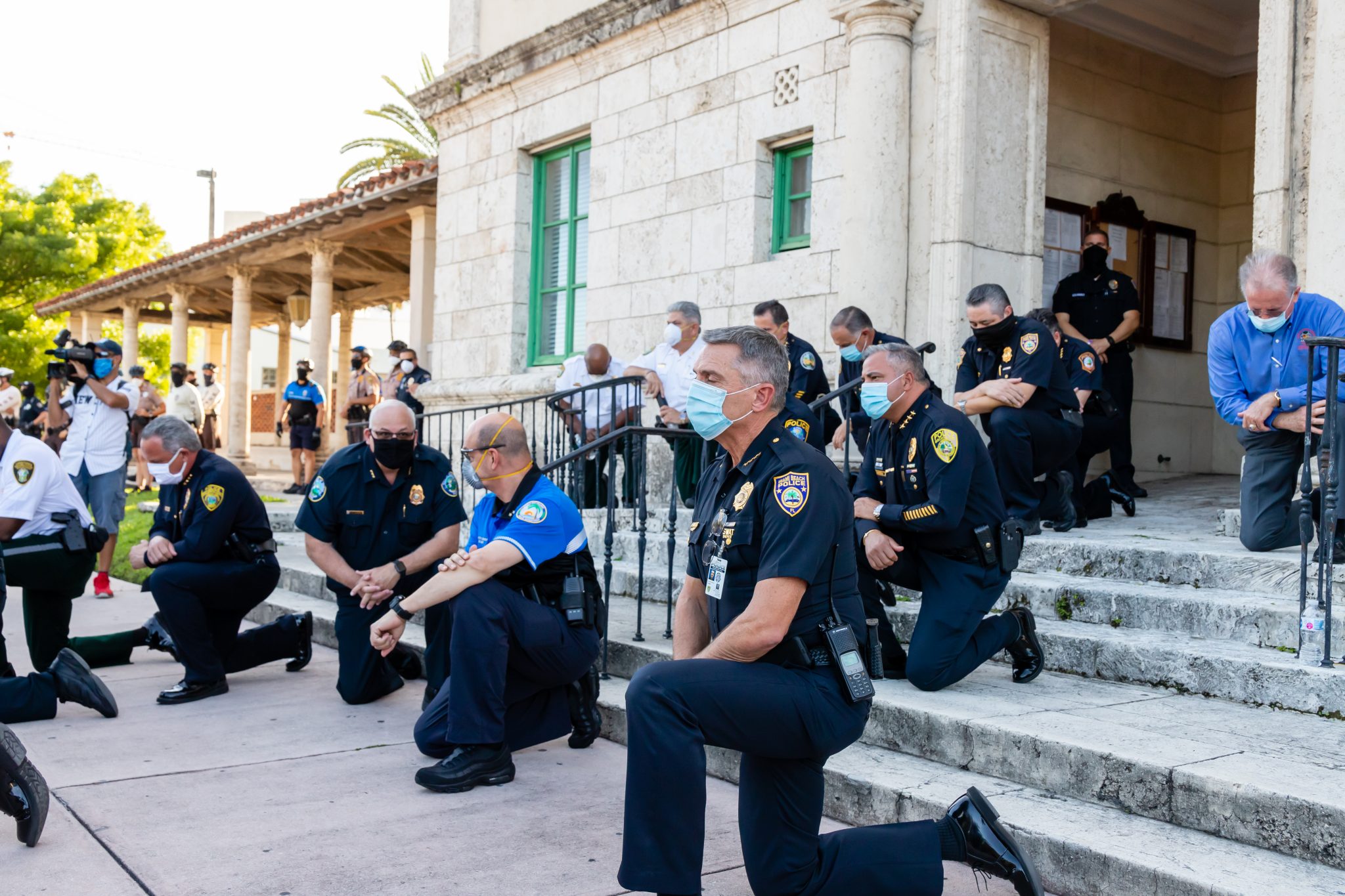 The Constitution sets out a way to have an effective government under which the citizens are still sovereign and their liberties are protected. Government only has the power the citizens agree to confer upon it. Basic liberties remain unalienable — that is, we always have title to them, and any infringement of them is illegitimate.

The issue of misuse of police power is therefore an essential issue for a constitutionalist. The state never has a right to infringe on the liberties of any citizen, each of whom is ever and always a sovereign. As citizens, we have delegated certain powers to government, largely to protect the those not able on their own to secure their own liberties against wrongdoers. To do this work of protection, we empower police to act in certain exceptional ways. This is a legitimate and constitutional use of power, because it is empowered by the people themselves.

Do not be deceived by generalizations, by rhetorical sleight of hand that wants to use this moment of profound national horror merely to grab an even more illegitimate, unaccountable, and destructive empower to themselves.

It follows that the moment the use of this exceptional force is not legitimated by the need to protect, when it is used capriciously or malevolently for some other purpose than the good of the citizens and the societal order they have established, then not only it is illegitimate, but it is also poisonous to the entire constitutional structure.

It is for this reason that so many Americans have recoiled from the misuse of the national police and intelligence powers to trample on the constitutional rights of individuals for the sake of  partisan advantage and the subversion of the presidential election process. That the great power of the state should be used to secure power for individuals at the expense of others is a cardinal constitutional sin. It is symptomatic of the tyranny that we specified in the Declaration of Independence was a legitimate cause for our national rebellion.

Abuse of state powers delegitimizes the state that condones it and takes advantage of it. By the principles of our own founding statement, our Declaration, it is universally recognized as a legitimate cause for stepping outside of law to find a remedy.

I am not one who thinks that our Constitution is outmoded or incompetent. I believe rather that these abuses of police power directly flout the Constitution, whether as a result of mere ignorance or of pure arrogance. As a constitutionalist, it matters not at all to me whether the abuser registers R or D. When the most basic idea of the Constitution is violated, that of protecting the liberties of each citizen, then the violator cannot be saved by the profession of some approved political philosophy or party affiliation.

Rights are granted by “Nature and Nature’s God” — that is why they are unalienable. We citizens have the responsibility not to create rights but to protect them. We empower governments to do that on our behalf and with our support. That means we must hold accountable the governments which employ and empower rogue actors. We must show them by our votes and by our free expression in print, in speech, and in assembly, that we will not allow our Constitution to be subverted — not as long as we yet believe in citizen sovereignty.

Cast out those city governments that offer only excuses and point fingers of blame rather than actually controlling the forces that they employ. Right action is the standard. Do not be deceived by generalizations, by rhetorical sleight of hand that wants to use this moment of profound national horror merely to grab an even more illegitimate, unaccountable, and destructive empower to themselves.

Stirring and profoundly enheartening was a story and an image that appeared locally, in Beavercreek, Ohio. A demonstration took place locally that had some tense initial moments. But at a certain point, protesters and police, who only a moment before had been in confrontation, knelt together in profound and humble unity.

Enforced kneeling is profound humiliation. Demanding another person kneel is repulsive to the spirit of American freedom, as if we can exorcise our shame by inflicting it on others. As an imposition on others, it is rightly rejected.

But evil is not creative. It always misappropriates something from the side of holiness and goodness. Lowering oneself is an ancient and profound expression of humility, of acknowledging the limitations of one’s own reach and power. Jewish prayer includes prostration to the ground on the holy Day of Atonement, and similar movements of lowering are present in Christian and Islamic traditions. Before the ultimate judgment, we must come with humility.

This humility is the exact counter, the true antidote, to the poison of power abuse and the supreme arrogance that it embodies. Such arrogance is not only an insult to every citizen — it is an assault on the One who has bestowed our unalienable liberties upon us.

The motivation of those on the streets varies wildly. Some are rioters, from whom protest is merely an excuse for criminality, both of the common sort and some motivated, as it seems, by larger and more sinister ideas of engineering programed chaos. Yet it is not fantastic to suppose that a significantly large number of the protesters — as opposed to the rioters — have been motivated, whether clearly or obscurely, by the very ideas that motivated our American founding. May we not also presume that most police are motivated by a selfless devotion to protect all from evil and harm? May we not contemplate for a moment how horrible it is when good and devoted people find themselves inexplicably confronting each other?

And is it not necessary to contemplate as well the possibility for what J. R. R. Tolkien called the “eucatastrophe” — the opposite of horror, the great good that that beckons us to keep striving through every difficulty and which no darkness can extinguish? There have been sparks of that good, that longed-for reconciliation, in sudden realization that people have had that we are really on the same side.

Tolkien wrote that even with no evidence of our hope outside, it is the essence of human creativity to imagine that world of hope realized, and that this work of willed creativity is at the core of our religious life. We need not blur reality and pretend — ignoring hard truths trivializes our hope.

But we can see even now, in glimpses here and there amidst the confrontation, that our hope is justified and alive and waiting to emerge in all its power and glory if we could but stay true to it with our every effort.

Our republic is a noisy and messy place. It is what one expects in a creative workshop in the middle of a project. At some moments, though, we feel the chaos getting out of hand, and instead of being a rich loam from which creativity spreads it breeds hateful and destructive forces threatening the very life of not only our project but each one of us.

The vaccine for this deadly virus is near at hand, though it always needs to be discovered anew. There is a place where people can come together without shame, surrendering only to something larger than the the limited aims of one side of a conflict. Look at it the image — it is not perfect, but within it is the seed of that which is.

We must have our hope at hand even as we stand courageously for our principles and dare to call out criminality and excess when it is dangerous or unpopular to do so. But we must not fixate on images of horror and human failure, and we must realize it is necessary for us to actively imagine and create the power of hope.

Actively cherish small scenes of reconciliation. Let us not choose to fixate on the horror of other images and brood in impotence. It is part of the responsibility of free people to actively hope and not helplessly drift into cynicism and hopelessness.

A few days ago in his Spectator A.M. newsletter, Daniel J. Flynn very importantly analyzed the failures of the Minneapolis police as a failure to heed the great principle of the Torah: love your neighbor as yourself. Remember this law that was enacted by the One on whose legitimacy our own order rests. Our neighbor is like us. As we would be loved, so must we love. And it is our responsibility not to wait for others to do everything before we dare to realize our hope, but to be the first to bow or kneel. Not in deference to a tyrant or a criminal or a forced credo, but before this mighty imperative to include the other within our heart. In this way we become active participants in the making of one nation out of disparate individuals who wish to remain always free. This is how we can and must renew the vision of our founding —  e pluribus unum — that out of the many divisions, we might come to a renewed and more perfect union, one great vision through many harmonious voices.