Buy the Book Book Review,Book reviews,Richard Nixon,Washington Post,Watergate Another Crack in the Watergate Edifice - The American Spectator | USA News and Politics
Menu
Buy the Book
Another Crack in the Watergate Edifice
Dwight Chapin’s new book shows that the narrative of Nixon as villain and Democrats and the press as heroes is crumbling.
by Francis P. Sempa
From left: H. R. Haldeman, Dwight Chapin, John Ehrlichman, and President Richard Nixon in the Oval Office, March 13, 1970 (Hartmann/National Archives & Records Administration/Wikimedia Commons) 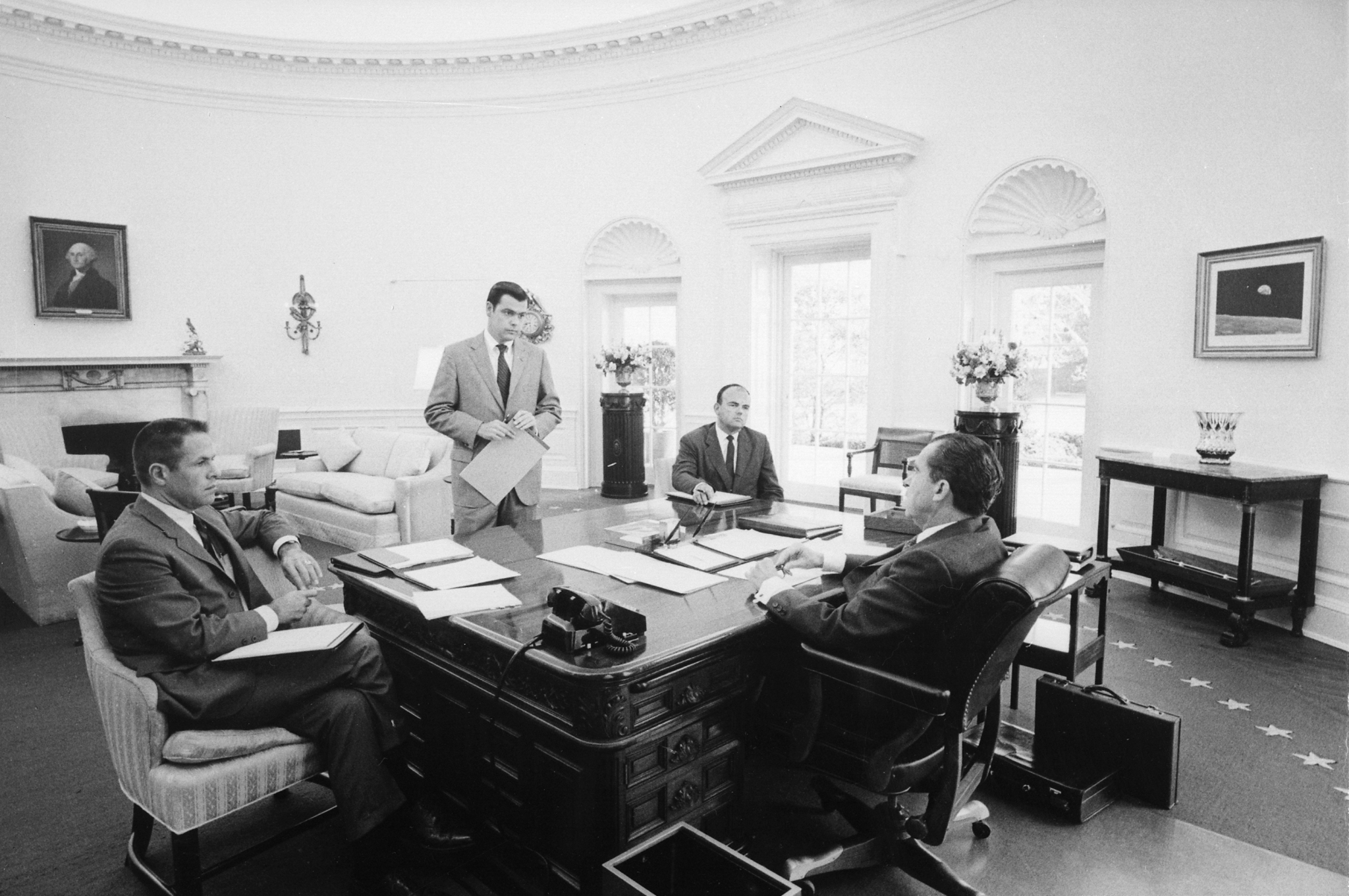 Cracks are starting to widen in the conventional “history” of Watergate — the Bob Woodward/Carl Bernstein/Hollywood version (familiar from the 1976 film All the President’s Men) that unfortunately has been accepted as gospel by most of America. The mainstream narrative about Watergate is that President Richard Nixon was evil, many of the people who served on his campaign and in his presidency were corrupt, and a courageous media led by the Washington Post saved our constitutional republic.

But it was not long after Watergate faded away that cracks in the conventional historical edifice began to appear. First, there was Jim Hougan’s book Secret Agenda (1984), which suggested that Nixon was brought down by partisan and “deep state” institutions (the CIA and the Pentagon), including a Pentagon operation that spied on the Nixon White House over fears that the administration was abandoning Taiwan and giving up too much to the Soviets in arms control talks.

That was followed in 1991 by Silent Coup, written by Len Colodny and Robert Gettlin, which added to Hougan’s information about the Pentagon’s hostility to Nixon, revealed Bob Woodward’s ties to the Pentagon, and explored former White House counsel John Dean’s role in orchestrating Nixon’s downfall.

Then in 2008 came James Rosen’s book The Strong Man. It is a persuasively argued defense of Nixon’s Attorney General John Mitchell, and it also points to Dean as the mastermind of the Watergate break-in and attempted cover-up and claims that the Watergate special prosecutors knew that the testimony of their two key witnesses — Dean and Jeb Magruder — was flawed and needed to be “reshaped” to secure convictions.

Chapin, who had nothing to do with the Watergate break-in or the attempted cover-up, was nevertheless prosecuted by the Special Counsel’s office.

More recently, former deputy White House counsel Geoff Shepard (and regular contributor to The American Spectator) has written several books — the latest being The Nixon Conspiracy: Watergate and the Plot to Remove the President — which accuse a partisan Special Counsel’s Office, staffed with former Kennedy and Johnson administration lawyers, of colluding with Dean, congressional Democrats, a national media whose hatred for Nixon went back decades, and a federal judge to bring down a president who had recently won a 49-state landslide election. Shepard’s latest book is based in part on a trove of documents from the Watergate Special Counsel’s office. British historian Paul Johnson called Nixon’s resignation a “media putsch.” Shepard contends that it was a Democrat Party/special prosecutor/John Dean/judicial/media putsch. In other words, it was a conspiracy to force Nixon from power. (READ MORE: The Real Story of Nixon’s Loss to Kennedy)

Now comes The President’s Man, the memoirs of former White House special assistant Dwight Chapin, who as a young aide to Nixon was responsible for scheduling the president’s appointments, meetings, and travel. Chapin accompanied Nixon to China to establish formal diplomatic relations with Mao’s regime and to the Soviet Union to sign the SALT I Treaty. Chapin, who had nothing to do with the Watergate break-in or the attempted cover-up, was nevertheless prosecuted by the Special Counsel’s office for making “false statements” to a grand jury. The “false statements” related to Chapin’s association with Donald Segretti, who was hired by Nixon’s campaign to conduct legal “dirty tricks.” Chapin to this day denies any criminal intent, claiming that prosecutors twisted a faulty recollection of relatively minor events into a perjury trap. Chapin was convicted by a D.C. jury and served nine months in prison.

Chapin also details what he considers the nefarious role that Dean played in manipulating Nixon and others to discuss covering up the Watergate break-in (which neither Nixon nor staff members Chapin, H. R. Haldeman, John Ehrlichman, or John Mitchell knew anything about) in order to save his own hide. (Shepard in his book also notes that Dean’s “prison” sentence was something less than actual incarceration.) Chapin confirms the existence of the Pentagon spy operation, having talked to one of the men who participated in it. And he points a finger at Alexander Haig, who served as Henry Kissinger’s deputy at the NSC and later as Nixon’s chief of staff, as a conduit for the Pentagon’s outrageous conduct.

And then there is the role of Mark Felt, the deputy director of the FBI, who Bob Woodward later revealed was “Deep Throat” — the source who covertly fed the Washington Post information because, according to Chapin and others, he blamed Nixon for not appointing him to succeed J. Edgar Hoover as FBI director. Chapin’s book, which was released in February, is splendidly written (with the help of David Fisher) and powerfully argued. Chapin, despite being fired by Nixon and going to prison as a result of his association with Nixon, depicts the former president as a great leader, a great statesman, and a good man.

Hopefully, Chapin’s book will get the attention it deserves, not just for his first-person accounts of Nixon’s foreign policy achievements but also for his insights into the true story of Watergate. Hougan, Colodny and Gettlin, Rosen, Shepard, and now Chapin are chiseling away at the myths of Watergate. Perhaps someday, we will know the whole story.