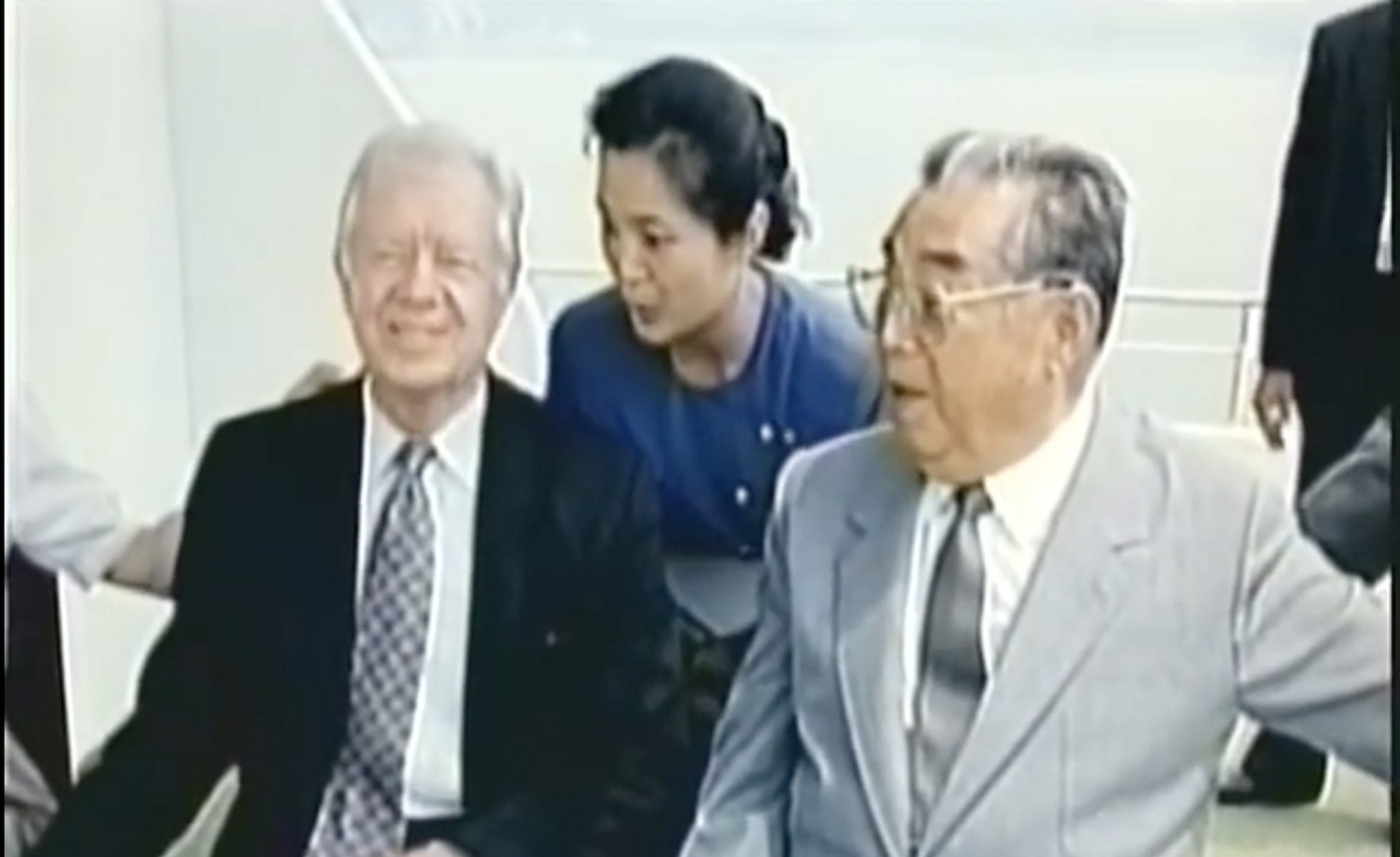 North Korea has long been not merely a communist state but a Stalinist state. For 70 years, it has been a political-ideological horror show, a nation of persecuted people captive to a totalitarian monarchy. Each of the three Kims who have run this ideological asylum was schooled in propaganda, agitation, manipulation, and disinformation — a skill so distinctively Soviet that the USSR had a Department of Agitprop and a term for the craft: dezinformatsiya.

One of the most alarming examples of North Korean manipulation of a leader occurred 24 years ago this month, courtesy of granddaddy Kim Il Sung and ex-president Jimmy Carter.

In June 1994, Carter paid an unexpected, bizarre visit to North Korea. It was so unexpected and bizarre that Clinton officials were privately outraged that this previous Democratic president, notorious for his naïveté and foreign-policy failures, would self-appoint himself to represent the current Democratic president. Bill Clinton throughout his 1992 campaign strove to disassociate himself from Carter — that is, Carter the president, the style, the approach. The Carter catastrophe had been so bad that the likes of Clinton and Al Gore had formed the centrist Democratic Leadership Council to convince the electorate that Democrats were safe to elect again in the post-Carter era. Thus, for Carter to trot off to Pyongyang, ostensibly on behalf of the Clinton administration, really steamed the Clinton folks. One Clinton official referred to Carter as a “treasonous prick.”

Carter had been fully duped.

The degree to which Jimmy Carter was hoodwinked is hard to describe. Carter was hosted that June 1994 by Kim Il Sung, who died only four weeks later. Kim had lurched into an interminable fifth decade of leadership, terminating only after his visit with Carter. The South Koreans henceforth jokingly referred to Carter as the “angel of death.”

And yet, Jimmy Carter saw another kind of angel in North Korea: an angel of light, or at least something of an angel amid a blaze of light. Carter conveyed just that upon his return from Pyongyang in a startling series of statements celebrating his self-perceived diplomatic triumph. He reported that Kim was “vigorous, alert, intelligent” (again, Kim was near death). He was pleased by what he perceived as the dictatorial Kim engaging in “very free discussions with his ministers.” And though Kim spearheaded a militantly atheistic regime, which destroyed a people that had once been so religious that Pyongyang was referred to as “the Jerusalem of the East,” the born-again Georgian Baptist discerned a Kim “very friendly toward Christianity.”

Even that’s not an adequate presentation of the lengths of the North Korean manipulation of Jimmy Carter. Consider this breathtaking on-site report from Carter, apparently unaware of the Potemkin Village treatment he was getting:

People are busy. They work 48 hours a week…. We found Pyongyang to be a bustling city. The only difference is that during working hours there are very few people on the street. They all have jobs or go to school. And after working hours, they pack the department stores, which Rosalynn visited. I went in one of them. It’s like Wal-Mart in American stores on a Saturday afternoon. They all walk around in there, and they seem in fairly good spirits. Pyongyang at night looks like Times Square. They are really heavily into bright neon lights and pictures and things like that.

This is, of course, a shocking observation. As everyone knows, North Korea is a land of darkness. Satellite photos showa northern half of the Korean peninsula marked by black, in complete contrast to the southern half. And as for those bustling people of good cheer packed in Wal-Mart-like stores, the reality is that within one year of this ludicrous appraisal by Carter, 10-15% of the North Korean population (two to three million people) starved to death.

All of this is crucial information because it reflects on Jimmy Carter’s infamously poor judgment in nearly all matters of foreign policy, and especially to the deal he negotiated with the North Korean despot that June 1994. It came to be known as the “Agreed Framework,” and was billed as a momentous accomplishment that would freeze North Korea’s nuclear pursuit, in exchange for a hefty infusion of American cash. Carter assured the world that “the crisis is over” in North Korea — words headlined by the New York Times and Washington Post.

Needless to say, it was not over. And when President George W. Bush, saddled with the Agreed Framework, denounced the Kim regime as part of an “axis of evil,” Jimmy Carter protested. “I think it will take years before we can repair the damage done by that statement,” sniffed Carter.

Actually, it has taken years — no, decades — to try to repair the damage done by Jimmy Carter.

And that brings us to President Trump.

Donald Trump is obviously no Jimmy Carter. There’s no Carter-like gullibility in Trump. And there’s little justification for criticizing Trump on North Korea at this point; quite the contrary, he should only be praised for a striking diplomatic breakthrough so early in his presidency. Nary a member of the Washington elite could have conceived of a one-on-one sit-down between Donald J. Trump and Kim Jong Un in Singapore mere months after the former was insulting the latter at the United Nations. Recall that Trump not only mocked little Kim but threatened to “totally destroy” North Korea. This was deemed unhinged, incendiary, insane. It could launch World War III.

Nine months later, the president and the Rocket Man are sitting down in Singapore.

Trump must stick to a course of hard-headed realism. Little Kim can give the appearance of a jovial chap, a frumpy frat-boy, a smiling Panda Bear who’d be fun to swig beers with at an NBA game. Trump has a good time with people. He’ll probably like Kim. Kim will want to be liked, and will surely flatter Trump, which he knows Trump likes. (I was particularly concerned by Trump’s “He-likes-me!” attitude toward Vladimir Putin in 2016.) Nonetheless, the reality is that little Kim is a nasty man who initiated his reign by executing a military official with a mortar round and who dispatched two worker-women to assassinate his half-brother. It runs in the family; like father (and grandfather), like son.

There’s no reason to think that this Kim is any kinder than Jimmy Carter’s Kim. He could be an equally slick negotiator.

Yes, President Trump, seek a deal — but a good, shrewd deal. And above all, know who and what you’re dealing with.

Paul Kengor is professor of political science at Grove City College. His books include A Pope and a President: John Paul II, Ronald Reagan, and the Extraordinary Untold Story of the 20th Century; Dupes: How America’s Adversaries Have Manipulated Progressives for a Century; and The Politically Incorrect Guide to Communism.