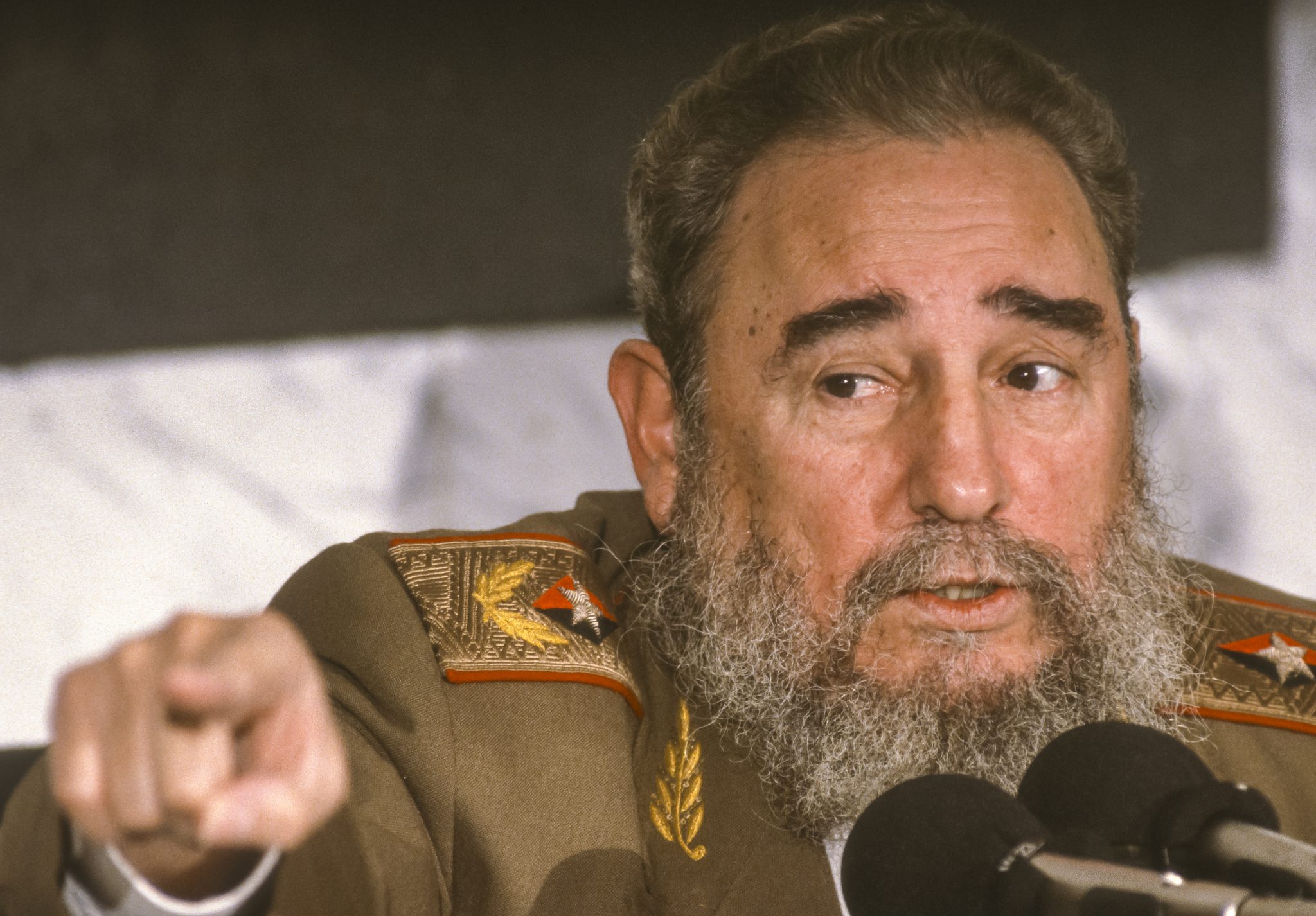 I remember very little about Cuba — a field of grassy ferns that closed up when I touched one, the boulders below El Morro Castle, and the fairytale-blue sea. Hazy as these images seem, they’re realer than anything Bernie Sanders ever said about my birthplace. I left Cuba when I was six years old, one step ahead of a firing squad — intended for my father, not me. How Dad went from being Fidel Castro’s friend and schoolmate to an enemy of the State to the dictator’s nemesis in the Exile should sound the alarm about the Democratic front-runner.

Luis Aguilar Leon was a studious youth at the Colegio de Dolores, a Catholic academy for the best and brightest Cuban boys, where he got friendly with Fidel, one year behind him. They maintained their amity through Belen Jesuit Preparatory School (Castro expelled the Jesuits from his former school once he took power) and into the University of Havana Law School. Both law students opposed the despotic Batista regime. Dad became a lawyer and newspaper editorialist, Fidel a lawyer and revolutionary.

Like most intellectuals of the day, Dad initially supported Castro. Why not. His buddy promised economic justice and social equality, much as Bernie Sanders now does. But unlike Sanders, who has done nothing of note, Castro walked the walk and risked his life battling Batista’s army in the Sierra Maestra mountains. When he triumphantly entered Havana on New Year’s Day 1959, thousands cheered, among them my father and his elite friends. What soon followed may be the best example ever of the famous adage, “Be careful what you wish for,” hopefully not to be surpassed by Bernie Sanders in November.

To my father’s credit, he early on began to protest Castro’s actions, such as nationalizing private industry, seizing farms and businesses, and inviting Soviet military personnel. He opined against them in the popular newspaper Prensa Libre (Free Press). But Castro knew how to handle dissent. He shut down the Prensa Libre and every other independent paper, then went a little farther, fusillading his opponents. When Dad heard people screaming, “To the wall!,” with his name prominent in the chant, he calculated it was time to depart Cuba. He got out just in time, taking our family to Miami.

Safe in the United States, Dad became a durable thorn in Castro’s side. He taught Latin American history at Georgetown University for 30 years, influencing formidable minds against the Cuban regime, among them his colleague Jeane Kirkpatrick and his student Bill Clinton. His books, Marxism in Latin America and Cuba 1933, became required reading in Cuban scholarship, along with his columns in the Miami Herald, lectures at the Pentagon, television interviews with the likes of Willian F. Buckley Jr., and essays. Hispanic Miamians of every social class still mention their favorite piece by him to me, “El Profeta Habla de los Cubanos” (The Prophet Talks About the Cubans).

Unfortunately for my father, the people of Cuba, and the world, his old friend turned enemy outlasted him. The Castro regime not only endures, but the Marxist cancer it boosted is now virulent here in America, spread by academia, Hollywood, and the news media. It has infected the country’s oldest political party to the point that the leading Democratic candidate is an avowed socialist who openly praises Castro.

“When Fidel Castro came into office, do you know what he did?” Bernie Sanders said on 60 Minutes last Sunday. “He had a massive literary program. Is that a bad thing?” I am not my father, but I can answer for him.

Before Castro, Cuba had the fourth highest literacy rate in Latin America at 76 percent. Castro’s so-called “literacy program” was an indoctrination tool based on the communist idea that children belong not to their parents but the State. Young Cuban children were forcibly taken from their home, placed in labor camps, and taught to read Marxist propaganda as future good apparatchiks. The infamous policy directly inspired the Catholic Church’s Operation Peter Pan. Between 1960 and 1962, more than 14,000 unaccompanied Cuban children were flown to the U.S. and put in temporary homes until their parents could get out of Cuba. Happily, 90 percent of them did. Later children and adults have been far less lucky. They have to leave the island the hard way — in makeshift rafts, floating cars, tires, over shark-infested water — or not at all.

This is the utopia Sanders lauds, in fact, seeks, to the acclaim of his many ignorant supporters. He’s on course to being the Democratic nominee, in which case, we the people will be all that stands between government tyranny and freedom. My father did his part, and I hope to do him proud.

How the greatest country on Earth came to such a precarious point is a long, insidious narrative that began over a hundred years ago in Russia. In all that time, one of the main forces that has kept it on the right side is a widespread knowledge of the evil of the other. That may no longer be the case. But let’s hope and pray it still is.

“Those who cannot remember the past are condemned to repeat it,” wrote George Santayana. I remember just enough of mine. And I’d rather not repeat it.