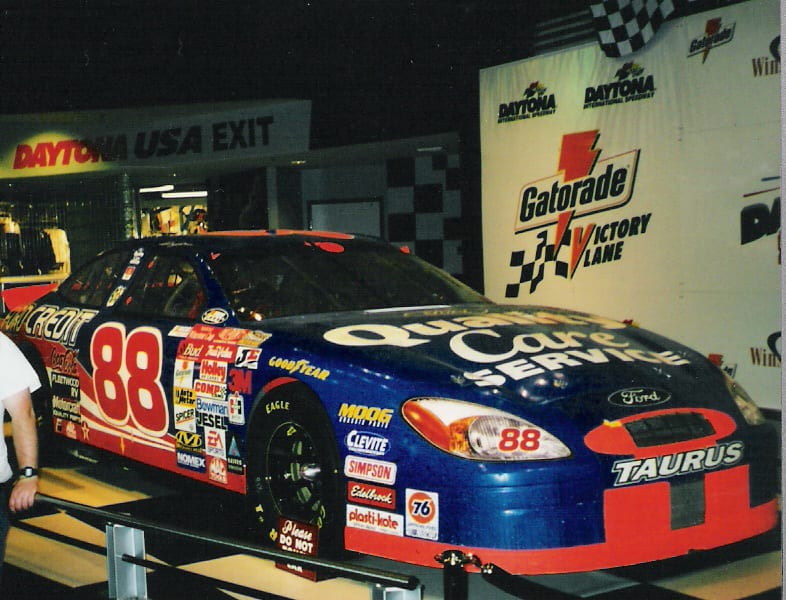 They ran the Daytona 500 yesterday and it was the kind of race that made you think fondly of the old days. Of a time, that is, when they raced on the actual beach at Daytona and among the great drivers were men like Lee Petty, Curtis Turner, and Junior Johnson. A time when all the automobiles were Detroit iron and America was still in love with cars and before it seemed like a good idea that they should drive themselves.

While the automobile, back then, was something built on an assembly line in Detroit, there existed a certain breed of men, living mostly in the hard parts of the South, who knew how to make those cars truly run and how to drive them. They could turn a wrench and they could execute what came to be known as a “bootlegger turn.” They understood cars in the way a surgeon understands human anatomy and they drove cars the way Chuck Yeager flew airplanes. It was an intimate and passionate relationship.

Those people loved cars. Lived cars. They hauled the “family car” down to Daytona to race it on the sand. If, that is, they were not using it that weekend to haul moonshine on the Carolina backroads. Those men had a relationship with cars that was beyond symbiotic. It was intimate and romantic.

Hemingway is supposed to have said, “There are only three sports: bullfighting, motor racing, and mountaineering; all the rest are merely games.”

That may be a little “over the top” as we say now. But it is true that the early days of stock car racing you might win and, then again, you might die. A great and charismatic racer who called himself “Fireball Roberts” died, in 1964, of burns many painful days after he crashed in a race at Charlotte. The name “Fireball” came in high school, when he was a fastball pitcher. Still …

The last, arguably, of that line of hard racing country boys was Dale Earnhardt who won the Daytona 500 in 1998. In 2001 he was killed in that same race, when he hit the wall near the finish of the race. Earnhardt was one of those drivers who liked to “swap paint.” It was about speed, of course, but it was also about aggression. They called him “The Intimidator” and fans loved or hated him… accordingly.

Richard Petty, the “king” of NASCAR, was once asked what made southern stock car racing different. He had a quick answer. “Down here,” he said, “we race.”

That is to say, they would bang fenders and put the other guy into the wall if that’s what it took. Which it often did.

During the era of King Richard and Bobby Allison and Cale Yarborough and the other great drivers, NASCAR touched something in the American character. It was about the machines, the drivers, and the crowds. The races, at places like Darlington, South Carolina, and Martinsburg, West Virginia, were celebrations of the Appalachian, yeoman culture.

The car was the essential American machine and these were the people who understood it most intimately. They could take a “stock car” and after a little time in the garage, bring it out as something different. Something that could, to use Petty’s formulation, race. One of the heroes of the time was “Smokey” Yunick who could do just about anything to a car to make it run faster. He was the master mechanic and people said that he was always cheating on the requirements that NASCAR set to make a car “stock.”

But as Petty said, once, “If you’re going to cheat, then cheat neat.”

In NASCAR, there were rules and there were “rules.” If you didn’t understand the distinction, then you were likely to run slow and last. If, that is, you could even qualify.

The drivers, the mechanics, the sponsors, and the fans… they were all part of a phenomenon. Then, while no one was watching, the American romance with the automobile slowly died. Television and NASCAR were, meanwhile, too busy to notice. They were chasing higher ratings, gaudier sponsors, and bigger tracks, outside of the South, thus leeching the sport’s red blood cells and making it just another item on entertainment menu. It was a diversion… not an affirmation.

TV ratings and attendance declined. But it was more than that. The sport turned on its own essential character which was that of the rural, Southern male.

So, of course, he returned the favor. He might not have resented the advent of Danica Patrick if she had been able to win a race. She could drive but she didn’t blow the doors off the competition and inspire recollections of Petty. And worse, if you made this observation, you would be told that you weren’t speaking truth, you were merely a redneck sexist.

Yesterday was Patrick’s last NASCAR race. She ran okay until she got into one of those NASCA fender benders that does a few million in uninsured damage to a dozen or more cars. She was gracious about it. Still, after all the hype, she was leaving NASCAR having never won a race and making more money and getting far more media attention than drivers who had.

Meanwhile, the race was won by Austin Dillon. He was driving car number 3, same as Dale Earnhardt was when he hit the wall and died at Daytona seventeen years earlier. The runner up was Darrell “Bubba” Wallace Jr., in car number 43. That was King Richard’s number which he drove to seven — count ’em — Daytona 500 victories. Wallace was driving for Petty’s team and that is like being blessed by the Pope.

Had he won, he would have been the first African American winner of the Daytona 500. There may be hope yet, for NASCAR.

As long, at least, as cars still require drivers.