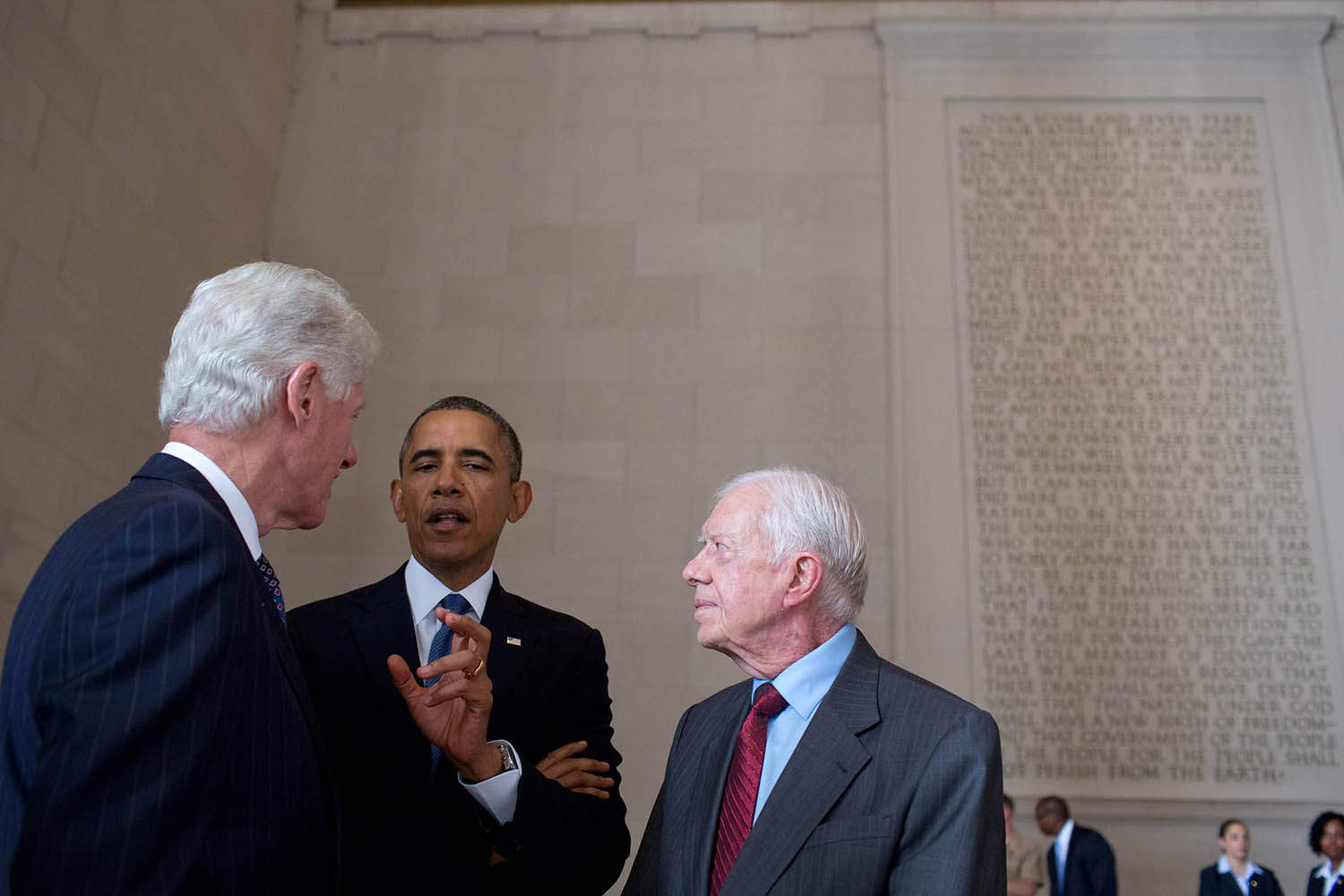 Donald Trump should eschew the example of the three most recent Democratic presidents in dealing with those who violently attacked the U.S. Capitol.

The despicable actions Wednesday making the oldest republic resemble the latest banana republic deserve punishment and not a payback. After soiling his legacy by stoking a mob into a pointless protest that became destructive, dangerous, and deadly, President Trump needs to avoid becoming pals or granting pardons to the barbarians within the gates as Presidents Carter, Clinton, and Obama did.

In 1978, Jimmy Carter commuted the sentence of Andres Figueroa Cordes, a Puerto Rican Communist who participated in a shoot-up of the well of the House of Representatives from the visitor’s gallery, on humanitarian grounds given the man’s terminal cancer diagnosis. The next year, Carter took the unpardonable step of pardoning Cordes’s three comrades in that 1954 action that wounded five congressmen.

On the last day of his presidency, Bill Clinton granted a full pardon to Susan Rosenberg, 16 years into a 58-year sentence for possession of guns and over 700 pounds of explosives. A member of the Weather Underground and numerous of its succeeding splinter groups, Rosenberg allegedly participated in the 1983 bombing of the U.S. Capitol as a member of something calling itself the Armed Resistance Unit. The explosion blew off Senate Minority Leader Robert Byrd’s door, ripped through a painting of Daniel Webster, and damaged the Senate cloak room.

“We purposely aimed our attack at the institutions of imperialist rule rather than at individual members of the ruling class,” the Capitol bombers contended. “We did not choose to kill any of them this time. But their lives are not sacred.”

This time strikes as the operative phrase. Rosenberg allegedly drove getaway in the 1981 Brink’s truck robbery in Rockland County, New York, that resulted in the murders of two cops and a Brink’s guard. Prosecutors did not pursue charges on the Capitol bombing or the murders in connection to the expropriation of over $1 million because it seemed superfluous in light of her lengthy sentence. They did not count on a future president nullifying justice.

After a pardoned Rosenberg landed a job teaching women’s studies at Hunter College and later when she raised money for Black Lives Matter, critics called her a “domestic terrorist” but fact checkers rebutted the label. “In the absence of a single, universally-agreed definition of ‘terrorism,’” Snopes.com maintained, “it is a matter of subjective determination as to whether the actions for which Rosenberg was convicted and imprisoned — possession of weapons and hundreds of pounds of explosives — should be described as acts of ‘domestic terrorism.’”

A year after Bill Ayers’s girlfriend and two of his friends blew themselves up in a Greenwich Village townhouse-turned-bomb-factory, the University of Michigan radical took part in the 1971 bombing of the U.S. Capitol. “We’d already bombed the Capitol,” he wrote in his memoir, “and we’d cased the White House. The Pentagon was leg two of the trifecta.” Ayers nevertheless resisted the T-word label: “Terrorists destroy randomly, while our actions bore, we hoped, the precise stamp of a cut diamond. Terrorists intimidate, while we aimed only to educate.”

Bill Ayers helped launch Barack Obama’s political career by hosting a 1995 fundraiser for Obama’s state senate candidacy in the home he shared with fellow former terrorist Bernardine Dohrn. Michelle Obama scheduled Ayers to speak at a conference she organized, and Obama occasionally found himself speaking at the same events as Ayers. “A searing and timely account of the juvenile court system, and the courageous individuals who rescue hope from despair,” praised Obama of Ayers’s 1997 book A Kind and Just Parent: Children of the Juvenile Court in The Chicago Tribune. The future president and past terrorist served together on the Woods Fund charitable board, and when Obama found himself on the board of the Chicago Annenberg Challenge, the outfit donated large sums to projects affiliated with his friend. Ayers donated money to a 2001 Obama political campaign but his greatest contribution came of the in-kind variety when he played down the association during Obama’s 2008 presidential run and became harder to find than he was during his Weather Underground days.

Perhaps that guy sitting in Nancy Pelosi’s chair lands a job at Hunter College. Possibly the gentleman wearing horns on his head, fur on his body, and red-white-and-blue face-paint secures massive grants and laudatory reviews of a book he authors. And maybe that guy who put a red MAGA hat on the statue of Gerald Ford can escape punishment by insisting that he aimed to educate, not intimidate. One guesses the establishment treats them more harshly than the people who bombed the Capitol or shot congressmen. This does not stem from their offenses eclipsing those of Ayers, Rosenberg, or the Puerto Rican Communists. The motivation comes from the cause (a truly idiotic one that stood zero chance of success and persuaded nobody beyond those who did not need persuasion) that they served.

From Mitt Romney to Joe Biden, politicians described the riot inside of their place of work as an “insurrection.” Chuck Schumer went so far as to call the vandals and thugs “domestic terrorists,” a designation that eluded participants in the mostly peaceful protests that took place over the summer. But the Capitol has witnessed far scarier acts by true “domestic terrorists” in recent American history.

Donald Trump, whose narcissistic meltdowns this week cost his party a majority in the Senate, sullied his legacy, and inspired a mob to trash the functioning symbol of republican governance, hopefully learns from the massive errors in judgment of Carter, Clinton, and Obama and offers no special clemency or embrace for despoilers of the Capitol who so admire him.