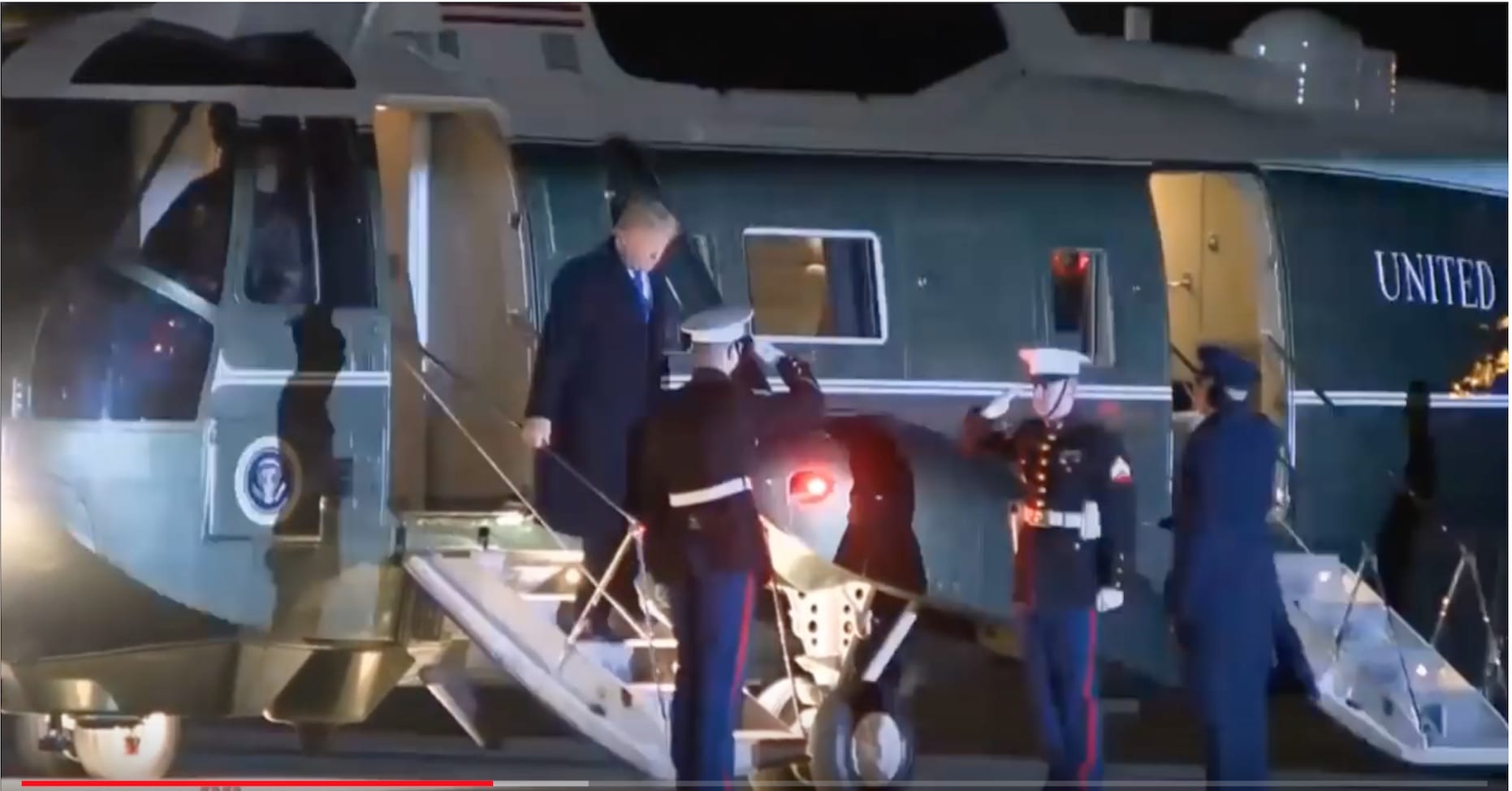 In September of 1967, I was a first year at Yale Law School, returning from a year recovering from acute colitis. My then gf, soon to be my wifey, and I went to a demonstration in the Graduate Student Commons in support of striking cafeteria workers. We were milling around, probably shouting slogans, and a hulking campus cop came up to my classmate, an extremely self-confident, smart fellow named Walter D. Waggoner. The cop said, “What’s your name, boy?”

Walter looked him dead in the eye and said, “I don’t have to answer your f–king questions.”

The cop stared and then walked away.

This all came rushing into my antique brain as I watched the news tonight that our President, Donald J. Trump, had been asked to answer Special Vishinsky Prosecutor Mueller’s questions about “collusion” between the Trump campaign and Putin’s Russia in the 2016 Presidential Campaign.

Incredibly, Trump, racing off to a conference of economic and finance bigwigs at Davos, Switzerland, said something like, “I’ll be glad to answer his questions.” Then he added, even more amazingly, “Under oath.”

Now, Donald R. Trump is a successful man. He has a jet plane. He’s President. He’s nobody’s idea of Abraham Lincoln or Thomas Jefferson, but he’s a smart guy.

Yet he has just done something foolish.

Let me tell you a few reasons why I say so:

One: There is no such crime as Russia/U.S. “Collusion.” The man who is running for President can talk to anyone he pleases. So can anyone who works for him. They can talk about anything except to disclose secret defense material. No one is even hinting that such a thing happened. So, there is no “there there” as my great, great Aunt Gertrude Stein said of Oakland.

If you were to say it were illegal, you would have to say that all diplomacy is illegal. That’s a concept too Orwellian even for Trump’s haters.

Two: The Special Prosecutor is not a friend of Mr. Trump. He’s been in bed with Trump haters from the word “go”. He has no special place in history unless he hurts Trump very badly. He’s not going to just walk away from this without the trophy of inflicting heavy duty damage on Trump. That’s just not the way Special Prosecutors operate. Birds got to fly. Fish got to swim. Prosecutors got to prosecute. It doesn’t have to be the biggest possible fish, but it has to be somebody.

Mr. Mueller would not have asked to question Trump if he didn’t mean to harm him or someone close to him. Surely Mr. Trump should know this or if he doesn’t, there’s something seriously askew in his orange head.

There is just no upside in answering Mr. Mueller’s questions. It can only hurt someone close to Trump.

Three: Mr. Trump does not have to answer anyone’s f–king questions. He’s President. He can’t be cited for contempt. He can’t be indicted. He cannot be prosecuted especially for the non-existent crime of “collusion.” If he does not have to answer the questions and if the media will hurt him as much as they possibly can no matter what he does, why should he answer questions — especially under oath?

He can be impeached and lying under oath would be a joke as a reason for impeachment, which can only be for “high crimes and misdemeanors.” This little tempest about Q and A with Mueller is no such thing.

We already know that Mr. Mueller is looking way in the past at Mr. Trump’s business dealings years ago. What can this possibly have to do with his acts as President? Every day Mr. Mueller sends out more requests for interrogations. Mr. Trump, sir, this man wants to hurt you. Don’t help him. When you get back to D.C. from Davos, explain that you spoke too hastily, that you had not consulted your counsel. That you will have a look at written interrogatories and consider answering them with the help of your lawyers. Mr. Trump, this man, Mr. Mueller, is part of a conspiracy to drive you from office.

Take a tip from a man who worked for a President who was FAR too co-operative with the people sworn to kill him. Don’t answer his f–king questions.