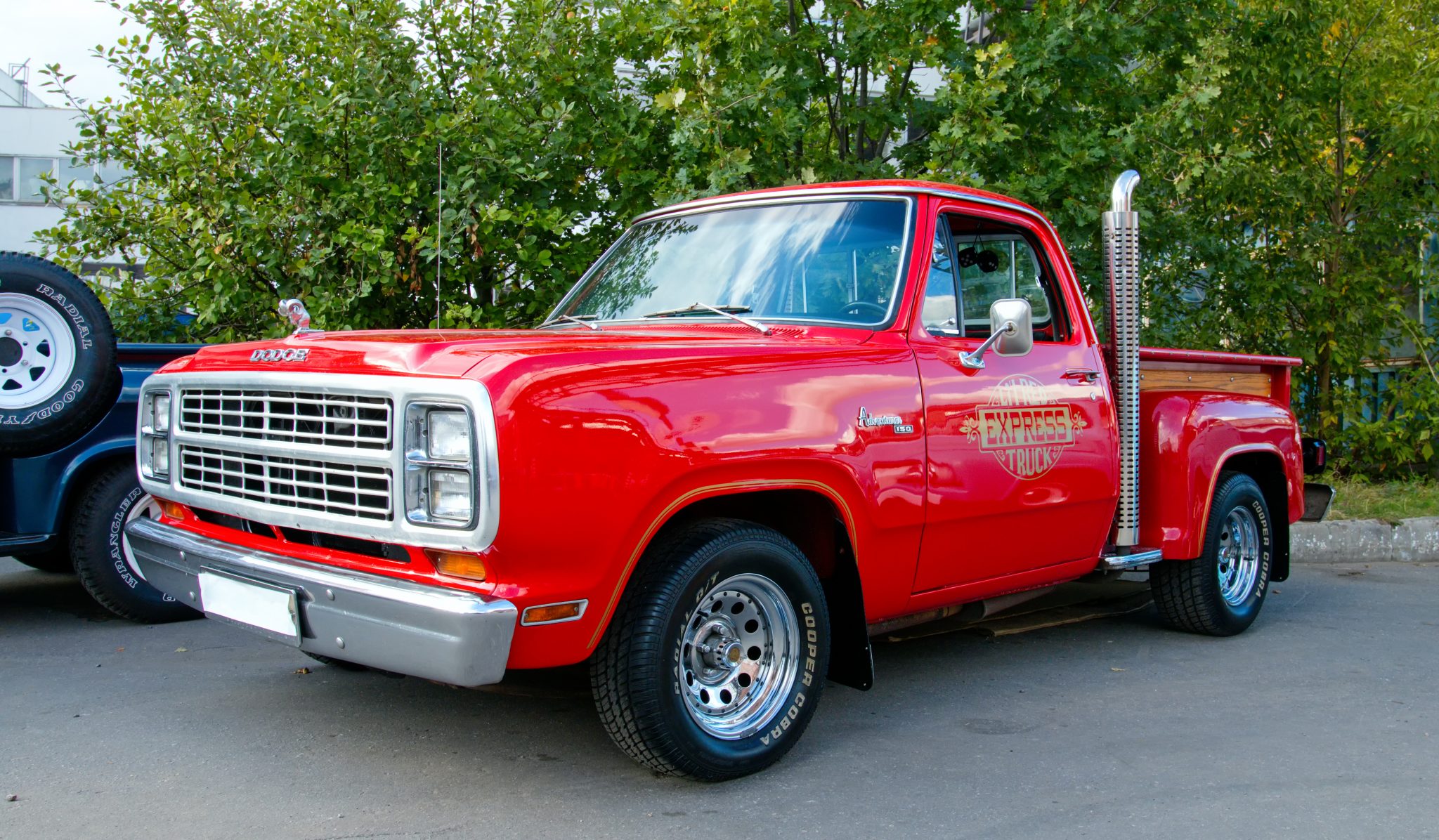 The high-performance truck is back — but it isn’t new.

One of the first of the breed dates back to the height of the Disco era, 1978, when high-performance cars had all but ceased to exist because of the then-new government regulations applied to them — in the manner of a chokehold and with the same effect.

The handful of “performance” cars that gimped along, like the Pontiac Trans-Am and its sister, the Chevy Camaro Z28, had to have (among other things) catalytic converters, in order to meet the latest emissions standards that applied to passenger cars. Because catalytic converters were then new-tech, the cats were hugely restrictive and physically large. They took up a lot of room under the floorpans, and they added a lot of cost to the car. That’s why mid-to-late ’70s cars like the Trans-Am and Z28 and even the Corvette had just one hugely restrictive catalytic converter.

Once upon a time, a good burnout was as important as a good quarter-mile time. The Li’l Red Express delivered both.

This meant single exhaust in the Trans-Am and Z28’s case, with “dual outlet” exhaust tips.

But in 1978, light trucks didn’t yet have to wear catalytic converters — a happy loophole exploited by Dodge to create the Li’l Red Express — which was the quickest American vehicle you could buy off the showroom floor that year.

It was a truck that was capable of running the quarter mile in the high 14s, quicker than a new Corvette and as quick as many of the quickest muscle cars made before the advent of catalytic converters.

It was almost as quick as a 440-powered ’70 Challenger or Charger.

And like them, it was capable (cue Elwood Blues voice) of running on regular — leaded — gas, which was still available in ’78 but could not be used in vehicles with converters because it would quickly plug them up.

No worries here. Plus some savings, as leaded cost less than unleaded. And it just smelled better, as known by those who remember.

The Express also had and could do things no Corvette (or Trans-Am or Z28) had or could, beyond outrun them.

It had a pair of functional smokestack exhaust pipes, the vertical equivalent of the sidepipes some new cars (like the Corvette) once had but were no longer allowed to have because of catalytic converters and federal drive-by noise regulations.

It also had a bed, to haul things while also hauling ass.

This was the Li’l Red Express!

It began as a regular cab/short bed D150 Ram pickup truck, chosen as the starting point by Tom Hoover — considered the father of the famous 426 Street Hemi — and Product Planning and Performance Group members Dick Maxwell and Dave Koffel for the same reasons Pontiac engineer John DeLorean chose the unassuming Tempest as the foundation for what became the GTO back in 1964.

The truck was basic, and relatively light — for a pickup.

To this was added a high-performance, uncorked version of the venerable Mopar 360 V8, which was a slightly hogged-out version of the hot little 340 small block that powered pre-catalytic muscle coupes like the Dodge Demon/Plymouth Duster.

It was originally planned to use a set of very high-performance W-2 heads with a Holley aluminum high-rise intake perched in between and a square-bore Holley four-barrel carb on top of that. But just as Pontiac had been compelled to dial back the ’73–74 Trans-Am’s SD-455 V8 — which was one of the very last pre-catalyst true high-performance American V8s — Dodge ended up using a less aggressive spread-bore intake mounting a Carter ThermoQuad four barrel that was similar to the GM/Rochester Quadrajet in many ways. It was not an outright performance carb like the square bore Holley, but it did have 850 CFMs of airflow capability when the secondaries opened up.

There was also a dual-snorkel air cleaner — echoes of the good ol’ days! — and a nice, lumpy (for 1978) camshaft with 33 degrees of overlap and 252 degrees of duration, hot for ’78. The 360 also used police-spec SuperFlow cylinder heads and valve springs and a heavy-duty timing chain, and it was fitted with a special oil pan with a windage tray that wasn’t used in regular production 360s.

It all resulted in 225 net horsepower — a big number for 1978, when the hottest engine you could get in a Trans-Am was the 220 horse 400 (a bigger V8 that made less power) and a meager 185 horsepower 350 powered the Z28. It was essentially identical to the standard 350 small block used in run-of-the-mill Malibus and Novas, with zero high-performance parts to set it apart.

It didn’t even get a dual snorkel air cleaner.

And it couldn’t touch the performance of the Li’l Red Express.

A performance-calibrated set-up 727 Torqueflite three-speed automatic with a higher-stall torque converter was bolted to the back of the 360, with the power multiplied by 3.55 rear gears.

It was the only new vehicle you could buy back in ’78 that could chirp the tires going from first to second … with an automatic transmission.

That was as it came.

And because it came without the emissions controls that afflicted cars that year and did not have to comply with emissions tests, it had uniquely legal potential for higher performance that no performance cars of that year offered.

Up the compression from the factory 8.2:1 and maybe install those W-2 heads, some headers, and a hotter cam. Get it into the 12s, perhaps, and still get your (emissions) sticker.

And then there was the as-it-came exhaust, which was unlike the pipes that came with anything else extant in 1978.

One for each side of the V8, first of all. True duals. As it once was, in high-performance applications. There were zero catalytic converters to interrupt the flow,  just a crossover to increase the torque. The sound emanated from a pair of big-rig chromed and heat-shielded stacks on either side of the cab, just aft of the doors, after passing through a set of Street Hemi mufflers.

The rest of the truck got the treatment, too. Real wood (oak) paneling was used along the bedsides and inset into the tailgate and the bed floor.

Inside, you had your pick of the standard bench or optional buckets. All Li’l Red Express trucks got a full set of gauges and a set of specific chromed, five-slot 15×8 wheels with 60 series tires — huge for 1978 — all part of the deal.

It sat low, with a noticeable forward rake. Unlike today’s performance trucks, which come standard with four-wheel drive, the Li’l Red Express did not even offer it. What kind of idiot would want to interfere with the 360’s ability to light ’em up? Once upon a time, a good burnout was as important as a good quarter-mile time. The Li’l Red Express delivered both.

Dodge’s ad for the thing read as follows:

Meet the new LI’L RED TRUCK from Dodge, the truly “customized” pickup that’ll stir excitement among even the most avid “trick-truck” enthusiasts. Best of all, it comes fully equipped from the factory. No need to seek out expensive local customizers and special-equipment suppliers…. The new Dodge Li’l RED TRUCK will turn a lot of heads … a limited-edition pickup with chrome-plated good looks. Only Dodge has it. So, live a li’l … a Li’l RED TRUCK, that is!

Naturally, it was only available in red, with gold-accent striping and “Li’l Red Express” stenciling on the doors. If you’re going to make a point, make a point! It was impossible to not see this thing.

Or hear it. The uncatalyzed sound of yesterday, in the here and now.

It helped people remember what was gone when it came to performance cars in 1978. No more Demons and 340 Swingers.

Some 2,188 people wanted a keepsake that year.

The next year, more than twice as many people — 5,118 of them — grabbed a set of keys, intuiting the fun could not last. Indeed, it had already begun to pass.

The ’79 model was saddled with a cat and could no longer burn regular gas. It also got the ridiculous 85 mph speedometer that the government decreed, as part of the effort to make people feel bad about speed. This proved to be the last year for the Li’l Red Express — the “loophole” having been cinched tight, the fun no longer allowed.

But for two years, you could buy what you used to be able to buy — in the body of a truck instead of a car.