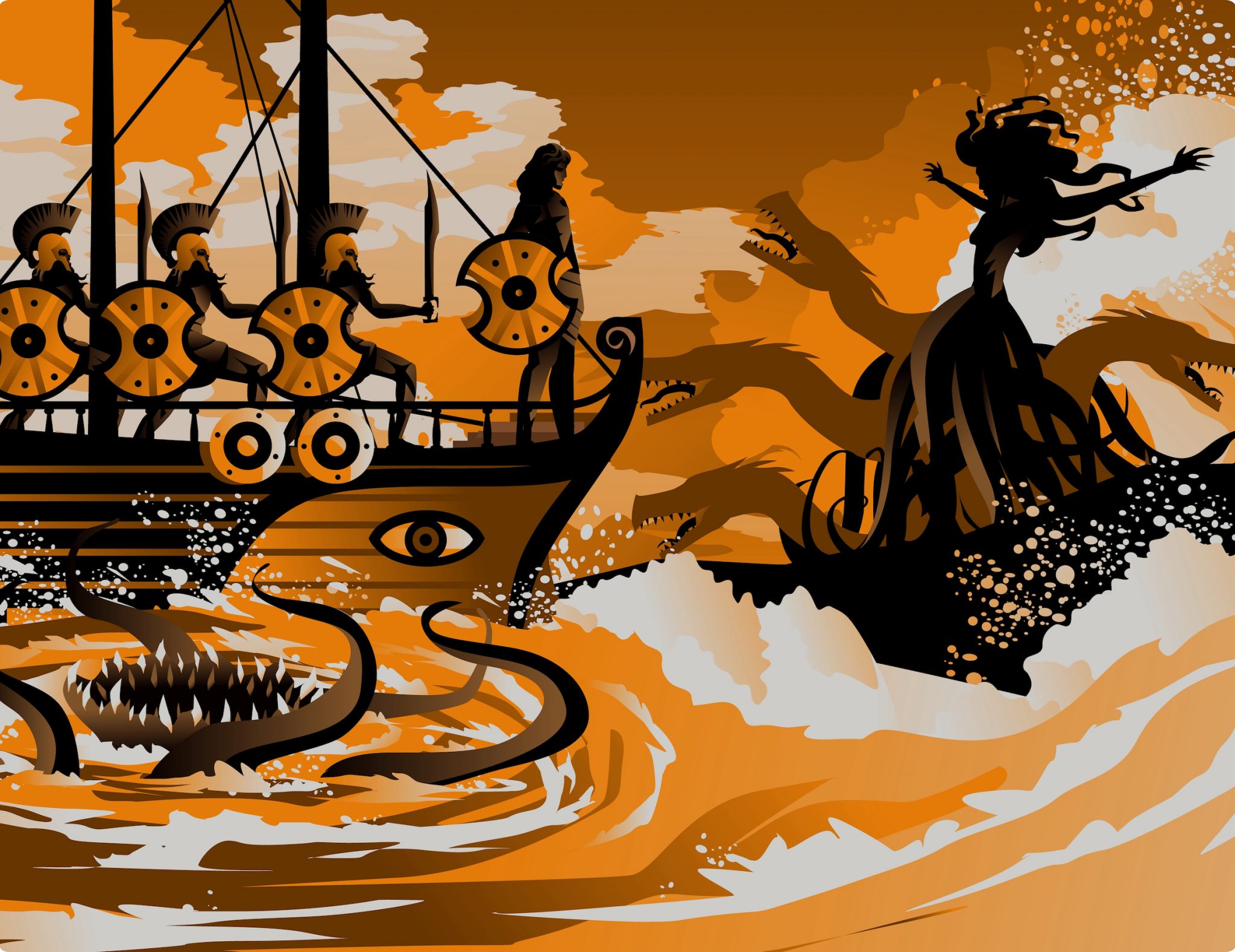 The woke Left has come for Odysseus, that hyacinth-haired favorite of Athena, master mariner, foremost of men, and King of Ithaca. Last month, a teacher named Heather Levine bragged on social media that she’d gotten the Odyssey removed from her school’s curriculum. Her effort is part of a larger woke movement called #DisruptTexts. This is the woke mob’s new excuse to ban anything worth reading: for “disrupt,” read “erase.” It’s basically a rehash of the 1990s politically correct crusade to do away with “dead white males,” only now it’s dressed up with the trendy language of “antiracism,” “inclusion,” “equity,” and other buzzwords.

What separates #DisruptTexts from the PC ’90s, however, is that hashtag, which has spread like wildfire. Search for it on Twitter, and you’ll see everyone from Rhode Island high school English teachers to Syracuse Ph.D.s to Texas-based writer/”agitators” flash the hash. The movement was founded by teachers Lorena Germán, Tricia Ebarvia, Julia Torres, and Kimberly Parker. #DisruptTexts’ mission is to “challenge the traditional canon in order to create a more inclusive, representative, and equitable language arts curriculum that our students deserve.” The four founders lead and organize the movement, but, their website says, it’s a “grassroots” initiative “fueled” by the “hundreds of educators and co-conspirators who make up our community.” That “fuel” is anything from teachers asking for suggestions for their “pretty woke sixth graders” to academics embracing their students’ ignorance: “If there are books your kids hate, stop assigning them. Even if you love them.” And a group of San Diego English teachers has publicly affirmed their support for #DisruptTexts. Twitter has allowed these spiritual book burners to truly democratize the old Goebbels quote about how telling a big enough lie often enough gets people to believe it. The big lie is alive and well, and the hashtag gives it a slick new look.

#DisruptTexts aims to replace great texts with woke-approved ones. And it hides that goal in a slick Trojan Horse. The group claims that it does “not believe in censorship and have never supported banning books.” They get away with it by censorship by omission, a sleight of hand that would make the King of Ithaka clap in approval. For instance, they say: why teach your students The Odyssey? After all, it’s just one more book “centered on the white male gaze” and written by a white male author. And everyone knows that “for too long, the traditional ‘canon’ — at all grade levels — has excluded the voices and rich literary legacies of communities of color.” With Homer and company gone, you can chuck those gross white voices from the classics and substitute a rad suggested text, like Jesmyn Ward’s Salvage the Bones or Jacqueline Woodson’s Another Brooklyn. Texts like these, which “affirm and center BIPOC voices,” are examples of “liberation,” while teaching texts by white male authors “hurts all students, and especially students of color.” But who said anything about censorship!

#DisruptTexts believes it is helping students, particularly students of color, by freeing them from works like The Odyssey and reducing Odysseus and his journey from heroic myth to just another oppressive white supremacist screed. But my own experience teaching Homer demonstrates the exact opposite.

It’s 2014 and my jaw’s level with my shoes because a bully and his victim are sitting side by side, quietly, lost in the book in front of them. This just doesn’t happen. I’m teaching sixth-grade world history at a Washington, D.C., public charter school, and I’m shocked, shocked, to find that cooperation is going on in here. These kids are opposites: neurotypical and neurodiverse, black and white, popular and outcast. They have almost nothing in common save that book in front of them: mythology. More specifically, it’s a Pixar animator’s take on the Hindu epic the Ramayana. I bought it for the charming illustrations, and when I brought it to class, it was an instant hit. Kids willingly stay after school to read it, like the two I’m looking at now. Neither student is Indian. Neither cares that a deeply hierarchical, patriarchal culture produced the story in front of them. They just care about Rama and Hanuman’s fight against a demon army.

In both cases, their love for mythology started with the Greek gods and heroes, Odysseus included. That love has easily transformed into curiosity in other mythologies, and into this unbelievable truce. The image before me was unthinkable a few hours ago: an upper-middle class student on the autism spectrum, and the lower-class student who often bullies him, enraptured side by side. I remember a quote from a book I read when I was their age: “Myth is the glue that holds societies together.” I never thought I’d see that metaphor poke, like a crocus, into reality.

It’s not the only time I’ll see it happen that year, however.

He’s in the cafeteria before school starts, because this is a charter school built in what used to be a carriage house in Penn Quarter, D.C., and there’s little enough room as there is, so this is the only place we can put the kids who get to school early. He’s having trouble sleeping. I know this not because I asked, but because he offered. To all the teachers. When I mention he told me this, my colleagues in the teacher’s lounge all know the fact. They also know something else he’s told me: that this student has awful images pop into his head unbidden. A colleague of mine mentions this, a little weirded out, and I tell her, “Don’t worry, I’ve got the same problem. They’re called automatic images.”

My student and I can’t help but have horrible pictures or entire scenarios come to us, unbidden, like the furies of Greek mythology. And myth is the only language in which unusual fears like ours are normal. It’s nothing new to say that mythology is an inadvertent crash course in psychology. It is, maybe, something new to say myth gives kids like this one the only accessible vocabulary they’ll have to name their fears. “Neuroses” and “automatic images” are lifeless, clinical terms. Furies, harpies, sirens … kids recognize those things as easily as they recognize guilt, doubt, and temptation. The word “monster” comes from the Latin monstrum — to show — and the monsters of Greek mythology help show kids their fears in recognizable faces. One morning in November, I’ll see this student in the cafeteria 30 minutes before classes start and tell him to come upstairs with me. I’ll ask if he’s still having trouble with the automatic images, and he’ll say yes. I’ll show him an image I found a day or two before, of a mythological Babylonian creature called a lamassu. They’re bulls with wings and men’s heads; they’re one of those things you’ve probably seen at some point, even if you don’t know what they’re called. Lamassu protect humans from demons. They’re the Cradle of Civilization’s answer to medieval gargoyles. I tell him to think of this if he’s having trouble getting to sleep.

It doesn’t matter that I’m showing him something from a different civilization’s mythology. The fact he knows Greek mythology as well as I do (in some cases better, actually) doesn’t make him stop and object that the lamassu is from a non-Caucasian race vanquished by Homer’s descendants during the Persian Wars. The fact that we both speak mythology is enough. The fantastic lineaments of the lamassu’s tripartite body, with its seamless transitions from bull to eagle to man, are a fitting match to the similarly liminal border between wakefulness and sleep. And as for values like tolerance, so prized by the woke, a kid who’s grown up on harpies and sirens already accepts diverse bodies, regardless of race or gender.

I’ll never see my students as excited as when I let them write their own Greek dramas. They wait all year for Ancient Greece as eagerly as they wait for Christmas. Actually, since we don’t cover the classics until after the Christmas break, you could argue their anticipation for classical civilization appreciates a bit more in value. Normally, splitting sixth graders up for in-class group work means the fait accompli of noise and inefficiency. But when I ask them to write Greek dramas that teach each other about Ancient Greece, they’re productive at group work. They get into it. They work together. They’re too engaged to even try to avoid work. At no other point during the year will I see this marriage of happiness and productivity. Even the kid who’s repeating the sixth grade for disciplinary infractions will dive into the assignment with gusto, playing Zeus, exiting, stage left, with the textually accurate remake that he’s “about to get his sea nymph on.”

None of this is available or accessible with the woke nonsense #DisruptTexts suggests we substitute. Nothing in the burgeoning woke canon (sadly, it’s a thing) has the subtlety, the beauty, the intrigue, and the universality of mythology, especially that of the Greeks. The one-dimensional polemics of leftist alternatives like Ibram Kendi’s Woke Baby or Ibtihaj Muhammad’s The Proudest Blue lack depth. In contrast, the heroes, monsters, and symbols the Greeks gave to us are compass points to our own subconscious minds and the conscious experiences they spawn. Even if kids can’t express that verbally, their love for myth shows that it makes sense. That sense is sometimes the only wisdom we have in a world where we rarely have the chance to manifest the unconscious in the conscious. That’s what’s behind kids’ love for myth, not any internalized racism or hidden white supremacy. It’s why they’ll gladly join Odysseus on his journey, and why his example will continue to take them beyond the Aegean.

A deeper and more lasting concern is that canceling Odysseus would also rob students of the backbone of most of Western culture. Western civilization may have Judeo-Christian hardware, but we’re running on a classical operating system, from our architecture to our ideas to the word “idea” itself. Homer’s epic is a great introduction to this cultural operating system, one students readily embrace. Bravery, justice, wisdom, filial piety, and the importance of home and hearth are as much a part of The Odyssey as are its gods and monsters. And it’s a great story.

How, then, do we answer #DisruptTexts? We let Odysseus answer for us. Give kids as much mythology as we can. Odysseus hides in their love for mythology, like he hid in the Trojan Horse. They already love it, and that love is the fitting answer to #DisruptTexts’ death drive.

If you want to get young kids started on mythology, the D’Aulaires books of Greek and Norse myths are fantastic places to start for kids up to sixth grade. The quality of the art and writing makes them equally enjoyable for older kids and adults, too.