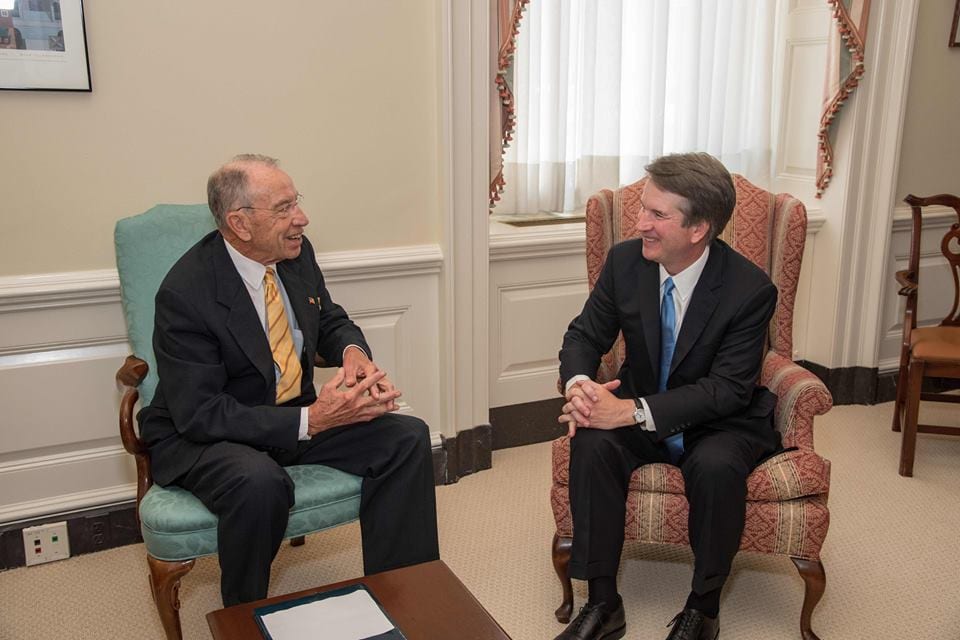 If you smelled the stench of skulduggery emanating from Dianne Feinstein’s “anonymous” letter concerning sexual misconduct by SCOTUS nominee Brett Kavanaugh, your nose didn’t deceive you. Feinstein has had the letter since July but waited until after Kavanaugh’s confirmation hearings ended before referring it to the FBI. The Senator claimed its author had “requested confidentiality” and “declined to come forward or press the matter further.” But, as the Washington Post admitted yesterday, Christine Blasey Ford contacted them at the same time she reached out to Feinstein. Did she collude with the Post and the Democrats to ambush Kavanaugh?

Did Ford make a deal with the Democrats and the Post to hide behind the shield of anonymity until it was too late for the Trump administration to replace Judge Kavanaugh with another nominee who could be confirmed before the midterms? Their obvious hope is that the Democrats will eke out a majority in the Senate and prevent President Trump from appointing any further conservative justices to the Supreme Court. The Washington Post story says, in passing, that Ford is a registered Democrat. Her social media accounts appear to have been scrubbed, but some information remains suggesting that she is member in good standing of “the resistance.”

Her name can, for example, be found among 5,000 signatures on a letter sent by “Physicians for Human Rights” to Secretary of Homeland Security Kirstjen Nielsen and Attorney General Jeff Sessions. This tendentious missive protests President Trump’s border security policy and is typical of the hysteria surrounding the separation of some children from their parents that eventually culminated in the “abolish ICE” movement. She signed the letter under the name, “Christine Blasey Ph.D. Psychologist.” It is little more than a recitation of anti-Trump talking points, dressed up to read like a cri de coeur from a group of concerned professionals:

Using children as leverage to punish their parents is unconscionable, both with respect to the health and well-being of children and as treatment of migrants and asylum seekers. The right to family unity is enshrined in U.S. and international law, which recognize that families are the foundation of society. The relationship of children and parents is the strongest social tie most people experience, and a threat to that tie is among the most traumatic events people can experience

It appears that, while she was hiding behind her anonymity, most of her other political activity was deleted from the internet. This is why anonymous accusers have been justly abhorred by honorable public servants throughout history. As far back as the Roman era, these creatures were considered beneath contempt. The Emperor Trajan famously admonished one of the provincial governors tasked with suppressing Christianity, “[A]nonymous accusations must not be admitted in evidence as against anyone, as it is introducing a dangerous precedent.” It is indeed. And this is more dangerous than the “high tech lynching” of Clarence Thomas in 1991.

His accuser, Anita Hill, was not at all credible but she did at least have the brass to make her baseless accusations in public. The same cannot be said of Christine Blasey Ford. While she hid behind the anonymity granted by the Democrats and the Washington Post, waiting for the signal to attack, Judge Kavanaugh has been seriously harmed. Like Justice Thomas, he will forever bear the mark of Cain. Thomas was, as recently as Friday, alluded to in a major publication as follows: “There’s already one credibly accused sexual aggressor on the Supreme Court who’s cast vote after vote denying women the right to control their biological destiny.”

Never mind that this is a reprehensible lie. It has been repeated so often that it permeates the public square like the smell of an open sewer. Likewise, as Senate Judiciary Committee chairman Chuck Grassley said while Ford’s accusations were still from an “anonymous” source, “Judge Kavanaugh’s background has been thoroughly vetted by the FBI on six different occasions throughout his decades of public service, and no such allegation ever surfaced.” Moreover, though Senator Feinstein knew about the allegation, she never asked a question about it during his confirmation hearings. This inclines Senator Grassley toward skepticism:

It’s disturbing that these uncorroborated allegations from more than 35 years ago, during high school, would surface on the eve of a committee vote after Democrats sat on them since July. If Ranking Member Feinstein and other Committee Democrats took this claim seriously, they should have brought it to the full Committee’s attention much earlier.

Chairman Grassley has no intention of delaying the Judiciary Committee vote scheduled for September 20. And Lindsey Graham, among the most influential Republican members of the committee, agrees. His statement reiterates Grassley’s comments as to “the substance and process regarding the allegations in this latest claim against Judge Kavanaugh.” More importantly, he has decided to put the onus of proof back on Ford by inviting her to talk directly with the entire committee rather than leveling charges at Kavanaugh through Senator Feinstein, her fellow Democrats, and the Washington Post. Specifically, he put it as follows:

If Ms. Ford wishes to provide information to the Committee, I would gladly listen to what she has to say and compare that against all the other information we have received about Judge Kavanaugh.… If the Committee is to hear from Ms. Ford, it should be done immediately so the process can continue as scheduled.

All of which brings us to the question of her veracity. According to the Post, Ford has an imperfect memory of the events. “Ford said she does not remember how the gathering came together the night of the incident.… She also doesn’t recall who owned the house or how she got there.” She does seem to remember the county, and this will no doubt be helpful to the committee if she musters the courage to appear. She never mentioned the event to anyone until 2012, when she attended couples therapy. The therapist’s notes from those sessions conflict with her current story but she claims that is an error on the therapist’s part. Her basic story goes thus:

She alleges that Kavanaugh — who played football and basketball at Georgetown Prep — held her down with the weight of his body and fumbled with her clothes, seemingly hindered by his intoxication. [Kavanaugh classmate Mark] Judge stood across the room, she said, and both boys were laughing “maniacally.” She said she yelled, hoping that someone downstairs would hear her over the music, and Kavanaugh clapped his hand over her mouth to silence her.

She escaped by locking herself in the bathroom, from whence she emerged after a few minutes. She isn’t sure how she got home. That’s pretty much it. This event happened 36 years ago among adolescents. The victim and the villain were under the influence of alcohol and the former can’t remember half of the details — yet somehow recalls enough to ruin the latter’s career. The latter says it never happened. This is why we have the Sixth Amendment, folks. Anonymous accusers enjoy little credibility and less respect among honorable people. These are characteristics they share with Democrats and journalists. The Senate should confirm Kavanaugh next week.