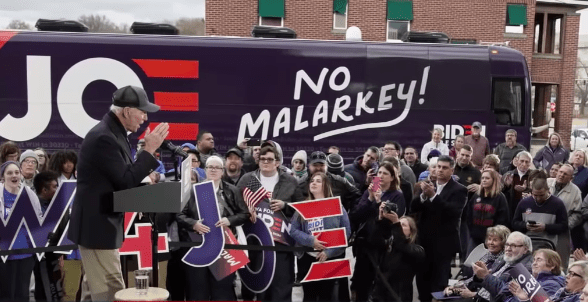 “He stole it,” Joe Biden says of Pete Buttigieg’s “Medicare for All Who Want It” plan. The accusation came as part of Biden’s eight-day “No Malarkey” bus tour of Iowa, a state with an ever-shifting poll leader that currently sees Buttigieg on top.

The capricious behavior of polls that catalyzed Biden’s notice of Buttigieg also sparked the oneupsmanship on what the former vice president wonkishly calls the “public option” and what Buttigieg more bumperstickerishly dubs “Medicare for All Who Want It.”

These mercurial political winds characterize public opinion on health care. Support once there shifted here and back again in a short span. Consider “Medicare for All,” of late almost an article of faith professed in Democratic debates by the likes of Bernie Sanders, Cory Booker, Elizabeth Warren, Kamala Harris, and Kirsten Gillibrand. Then, in an emperor-has-no-clothes moment, Gillibrand dropped out, Harris wavered, Booker started calling himself a “pragmatist” on the issue, and Warren and Sanders saw their support erode. Biden, Buttigieg, and Amy Klobuchar began to look like the adults on the stage to more Democratic voters.

A Quinnipiac poll shows how the earth shifted under their feet. In this seismic wave, the numbers for Medicare for All flipped. In August 2017, the idea enjoyed a 51 to 38 percent good idea/bad idea split. By late November, just 36 percent (the same share who believe in UFOs and slightly less than the share who believe in ghosts) regarded it as a good idea and 52 percent called it a bad idea.

Several of the more moderate Democrats immoderately questioned the wisdom of Medicare for All. This occurred most conspicuously at the September debate in Houston.

“I trust the American people to make the right choice for them,” Buttigieg told Sanders. “Why don’t you?” Biden noted the gargantuan cost of Medicare for All. “I don’t think that’s a bold idea,” Klobuchar declared. “I think that’s a bad idea.”

The Quinnipiac poll’s numbers on health care help explain the Buttigieg surge and Biden sticking around.

About a quarter of Democrats and Democrat leaners cite health care as the most important issue to them. Roll immigration, gun policy, taxes, and education into one issue, and health care still beats it as the No. 1 concern. And among all voters, and even among just Democrats, options beat one-size-fits-all on health care.

Fifty-eight percent of all voters support an optional buy-in on Medicare (just 27 percent oppose). The idea resonates even among Republicans, with nearly half labeling it a good idea.

Perhaps the idea of competition and choice between public and private plans appeals to some. Maybe the language of a “buy-in” conveys responsible while that of “for all” conjures up reckless. Or, maybe, like the revolving door of Democratic front-runners, the shift in popularity from one plan to another reflects a general dissatisfaction with the status quo.

This dissatisfaction with paying more than similar nations do for health care for worse results crosses party lines, though the solutions offered generally do not. The buy-in on Medicare, even if like Obamacare it ultimately only succeeds in its failure legitimizing more radical plans, bucks this trend in that almost three-quarters of Democrats and almost half of Republicans regard it as a good idea.

Its popularity helps explain the success of Buttigieg and Biden, its two most prominent backers. It also explains why Republicans skittish about the idea of again expanding government involvement in health care need to come up with a competing plan or inevitably lose this debate by default.