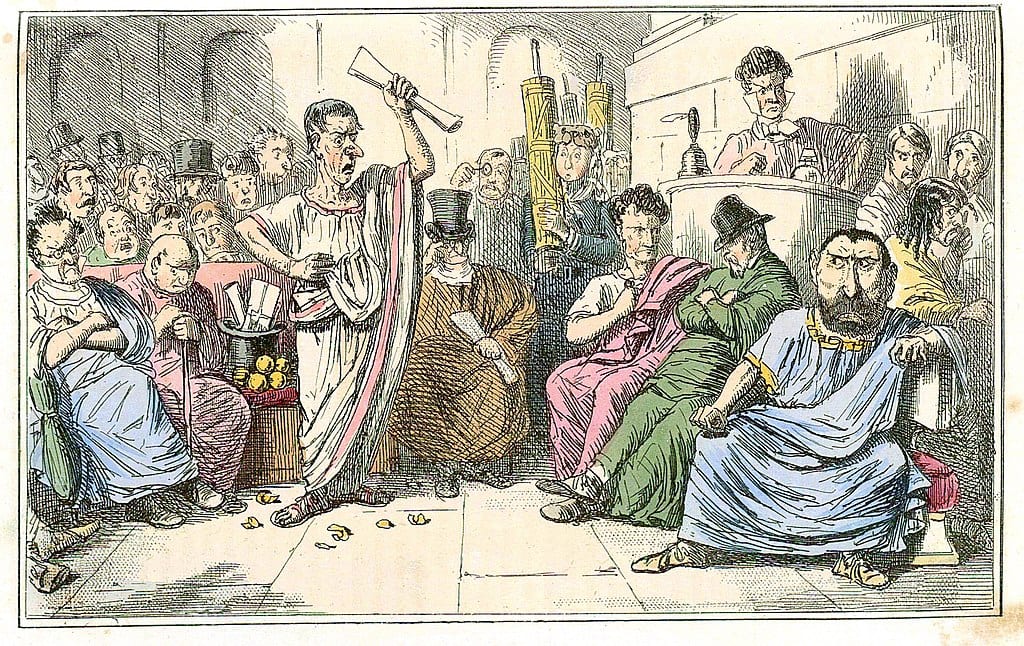 Cicero is remembered today as a great Roman orator, but few recall that he was a lawyer by trade. In fact, he first rose to public prominence by using his rhetorical skills to secure the acquittal of a man accused of patricide. Cicero’s eloquence eventually enabled him to rise to the rank of Consul, in which capacity he presided over the execution without trial of five Senators. He was exiled for this unlawful act and, at length, was himself illegally executed. There’s a lesson here for the Democrats who increasingly employ lubricious lawyers to circumvent the rule of law.

Cicero’s career, which contributed to the republic’s collapse, came to mind when Democrat Bill Nelson hired attorney Marc E. Elias — a “recount specialist” with ties to Hillary Clinton and George Soros — to sue the state of Florida over the outcome of its recent senatorial race. Elias made his intentions clear upon arriving in the Sunshine State: “We’re doing this not just because it’s automatic… we’re doing it to win.” And he does indeed know how to “win” recounts. He was the perpetrator of Al Franken’s notorious 2008 Senate “victory.” As the Washington Post put it in a 2016 profile:

Elias’s personal breakthrough came when he represented Al Franken in the recount of the 2008 Minnesota Senate race. It was the longest recount in history — eight months — and resulted in a 312-vote win for Franken. Since then, Elias has been the go-to lawyer for a string of Democrats in recounts and has never lost.

The same Post profile documents the Soros connection: “With a multimillion-dollar commitment from liberal mega-donor George Soros, Elias is challenging laws that, he argues, diminish the impact of important Democratic Party constituencies.” Not surprisingly, his arrival in Florida was taken as an indication that the Democrats plan to ignore the will of the voters in the Scott-Nelson Senate race. The Clinton connection involves a law firm at which Elias is a partner. He is a key figure behind a notorious anti-Trump dossier compiled for the 2016 Clinton campaign. Fox News reports:

This character’s connection with that tawdry work of fiction, paid for by the Clinton campaign and used to launch the ridiculous yet dangerous Mueller investigation, doesn’t enhance his credibility. Nor does it reflect well on the motives of Senator Nelson or his adamant refusal to concede that he lost the Florida Senate race to Rick Scott. It also suggests that President Trump was on to something when he tweeted, “Democrats sent their best election stealing lawyer, Marc Elias.” It also explains Senator Lindsey Graham’s obvious outrage when he compared it to the Kavanaugh showdown:

They didn’t destroy Kavanaugh, and they’re not going to screw Rick Scott.… This liberal activist lawyer, the Clinton lawyer, went to Florida with the purpose of winning the election.… The 2018 cycle will be remembered for liberal Democrats doing whatever it takes when it comes to judges and votes to win, the law be damned.

It’s difficult to gainsay Graham on this point. The reason the Democrats tried to destroy now-Justice Kavanaugh is that they need a left-leaning Supreme Court to facilitate the machinations of their oily advocates. Having given up any pretense of simply obeying the law, the Democrats depend on their lawyers to make sure it doesn’t cause much inconvenience. Thus, the Democrat loser in the Florida gubernatorial race has also lawyered up and is mulling some sort of skullduggery. Andrew Gillum’s attorney, Barry Richard, says that he is seriously considering legal action:

I know that, in the case of Mayor Gillum, he has been reluctant to become involved in litigation. But we are receiving an increasing amount of evidence that Florida’s effort to make the (elections) statutes more efficient has been done at the sacrifice of the fundamental right to vote.… He is reviewing his options.

This is, of course, the same line of balderdash that we are getting from across the state line in Georgia. Democrat loser Stacey Abrams would have us believe that she is on a noble crusade to make sure every vote is counted. Her obvious goal is to manufacture enough mystery ballots to push the vote total for the winner, Brian Kemp, below the 50 percent mark so she can force an election “do-over” in December. Time is not on her side, nor is the math, so she and the Democratic Party of Georgia have filed a lawsuit against the new Secretary of State to delay certification of the election results.

This, if you will recall, is the same maneuver that Al Gore’s lawyers attempted in Florida 18 years ago. They sued Florida Secretary of State Katherine Harris to prevent her from certifying the 2000 election results. The gambit didn’t work for Gore and it won’t work for Abrams. Her lawyers have also filed lawsuits against Chatham, DeKalb, Dougherty, and Gwinnett counties to force them to count invalid ballots. Meanwhile, her campaign manager announced Monday that the campaign had discovered 5,569 “uncounted” votes, 80 percent of which were purportedly cast for Abrams:

Here’s the breakdown of the new 5k votes that were reported yesterday from places that had been listed as 100%. And breaking: we are about to file litigation this afternoon to force the counting of provisionals and absentees.

And if you doubt that this is indeed the age of miracles, Abrams received an even higher percentage of the vote in heavily Democratic counties like Fulton and Clayton than erstwhile President Obama received in the 2008 or 2012 presidential elections. In Fulton County, for example, Obama received 64.1 percent of the vote in 2012. In the new votes found Monday, Abrams received well over 80 percent. Yet another miracle took place on Tuesday when the Abrams campaign discovered even more “uncounted” ballots, 73 percent of which were (surprise!) allegedly cast for Abrams:

Breaking: Cobb, Henry, Walker new votes in this morning, @staceyabrams won 1,282 of 1,762 (73% Abrams). Some were newly found absentee votes, despite counties being listed as 100%. Most were provisionals.

Even with these prodigious percentages, the Abrams campaign will have to do better than this if they are to pick up enough votes to trigger the runoff election. Perhaps they can get a few tips from Maricopa County in Arizona, where a lot of invalid Democratic ballots were “cured” by election officials, allowing Kyrsten Sinema to suddenly pull ahead of Martha McSally. The Arizona GOP wants access to communications between the Maricopa County recorder and Sinema’s campaign. But that would mean actually obeying the law. And that’s what Democrat lawyers are there to prevent.

As Graham put it, “In the eyes of Democrats, the law is just something to get around when it comes to winning what you want.” That’s why they’re dangerous. Our government, like the Roman republic, is based on the principle that no one is above the law. The Democrats have assiduously undermined that principle, but this is as dangerous for them as it is for us. They should consider Cicero, whose executioners had been sent by his young protégé, Octavian. The latter knew about those five executions and the former wound up with his head in a bag. Both men were above the law.