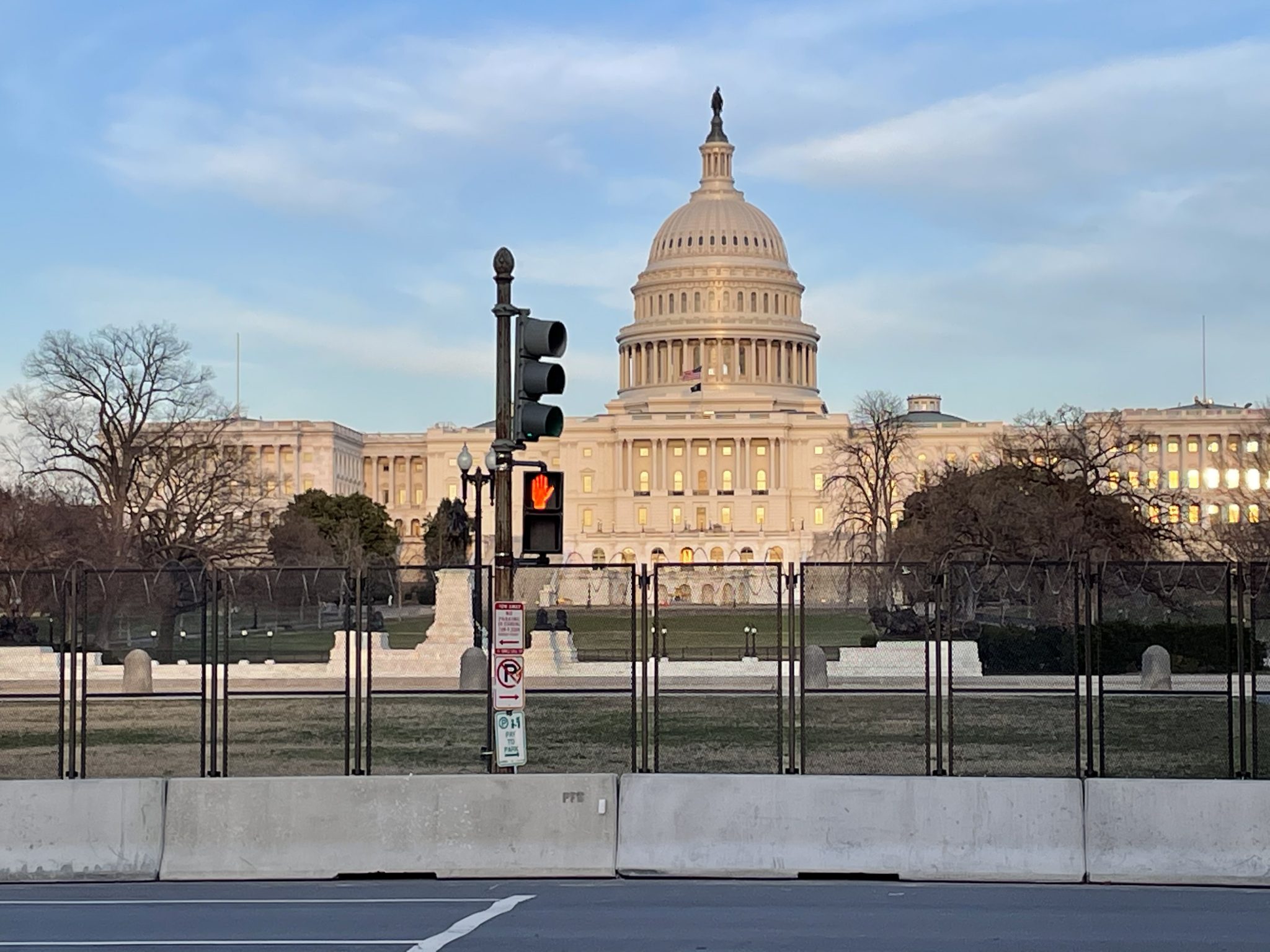 If anyone ever wondered about the consequences of electing grossly incompetent Democrat leaders to office, one need not look any further than Washington, D.C.

Along with Democrat-run New York City, Los Angeles, Chicago, and Minneapolis, our nation’s capital has declined rapidly in the past year. Much of the city now resembles a third-world country. And under the current leadership, it doesn’t look like much will change anytime soon.

Aside from the Communist Chinese Party, which unleashed the coronavirus on the world, no one deserves more credit for D.C.’s demise than Democrat Mayor Muriel Bowser. Bowser has abrogated her responsibilities by shamefully imposing unscientific, draconian lockdowns and other disastrous policies that have desecrated the economy; encouraged lawlessness; removed all forms of entertainment, including movies, concerts, shows, and sports; destroyed businesses and jobs; and put the needs of children last.

Even after it became clear that children were not severely impacted by COVID, Bowser still chose to keep the public schools closed for nearly a full year, causing irreparable damage and suffering to the more than 52,000 students in the district. It’s no wonder that more than 15,000 residents moved out of D.C. in the beginning of last year, nearly three times the number from the previous year.

The city has been locked down since March 16, 2020, and has never formally reopened. It is still not clear when it will. 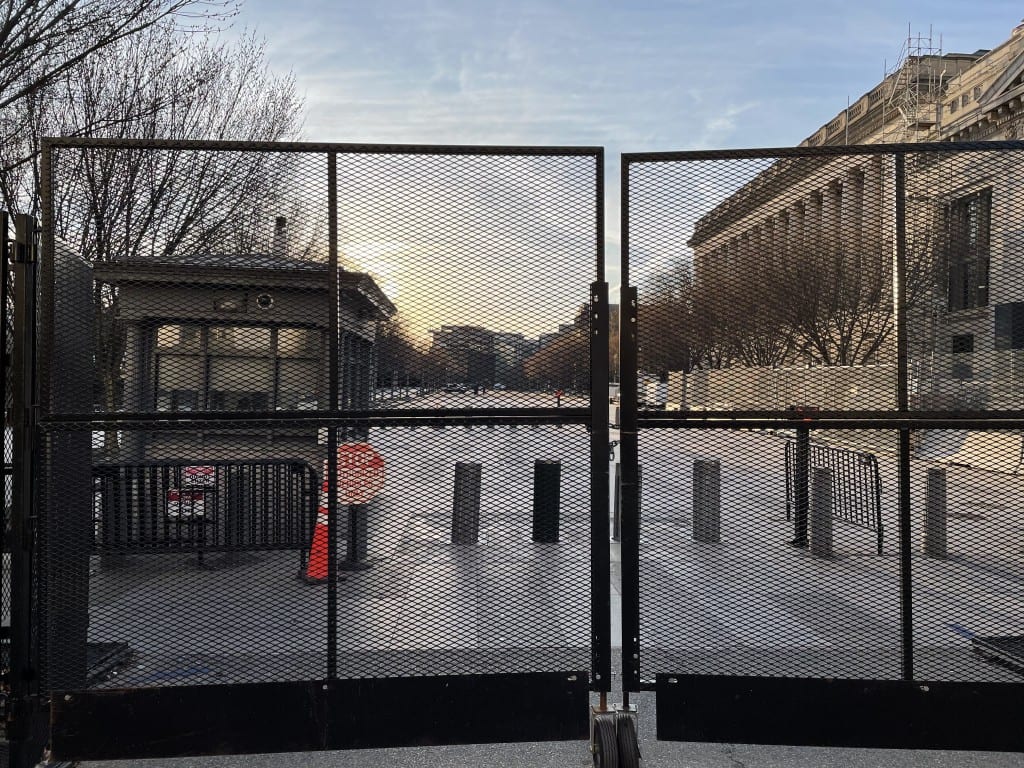 The entirety of downtown D.C. resembles a ghost town, with abandoned office buildings, vacant restaurants, and boarded-up retail stores, many of which will never reopen. Bruce Springsteen’s song “My Hometown,” in which he vividly recalls his upbringing in the ramshackle town of Freehold, New Jersey, sounds as though it were written to describe D.C. circa March 2021.

How exactly did this happen? Not too long ago, in July 2019, the unemployment rate in the district was a low 3.3 percent. Now it currently sits at an anemic 7.9 percent. This is primarily due to Bowser’s constant refusals to open up restaurants and museums and to continue to implement some of the most stringent lockdown measures, even as she broke her own quarantine rules to travel to Delaware last November to watch President Biden’s victory speech. Not to worry, though: Bowser deemed it “essential travel.”

The Capitol Building has remained fenced off with barbed wire since January 6, and 2,300 National Guardsmen are currently stationed there to protect House Speaker Nancy Pelosi from what she recently described as the threat of “All the president’s [Trump’s] men.” On Monday, some good news did come from the acting House Sergeant, who announced that Capitol Police will begin scaling back the fencing along the perimeter in the coming days. But presumably Pelosi still has a better understanding of when these “domestic terrorists” will emerge from the depths of the Potomac, or wherever “white supremacists” tend to hide out these days.

According to data from the D.C. restaurant industry, before the pandemic, restaurant and food service jobs in the district made up 65,200 jobs or 8 percent of total employment. In 2018, there was an estimated $4.4 billion in sales from the District’s restaurants, and every dollar spent in the industry contributed $1.31 to the state’s economy.

But the restaurant industry has become depleted in the past year, thanks to Bowser’s decisions to either only allow them to operate at 25 percent capacity, or in some cases to ban indoor dining entirely for extended periods of time, as she did last Christmas and New Year’s. Many restaurants simply did not have enough capital to invest in expensive outdoor heaters and Plexiglas, while serving fewer customers, and so they closed.

Bowser has also chosen to keep virtually all of the museums and the zoo closed. It’s no wonder that tourism declined by more than 53 percent last year, causing the loss of $5.6 billion in revenue.

The National Mall, which saw both the World War II and Lincoln memorials defaced by Black Lives Matter (BLM) rioters last summer, remains mostly dormant. With the exception of the outdoor Sculpture Garden, every single museum on the Mall remains closed indefinitely. This includes the National Gallery of Art, the Holocaust Memorial Museum, the Museum of the American Indian, the Sackler Gallery, all of the Smithsonian museums, the Museum of African American History, and several others. The International Spy Museum and the Museum of the Bible, which are not part of the Mall, have only recently reopened. 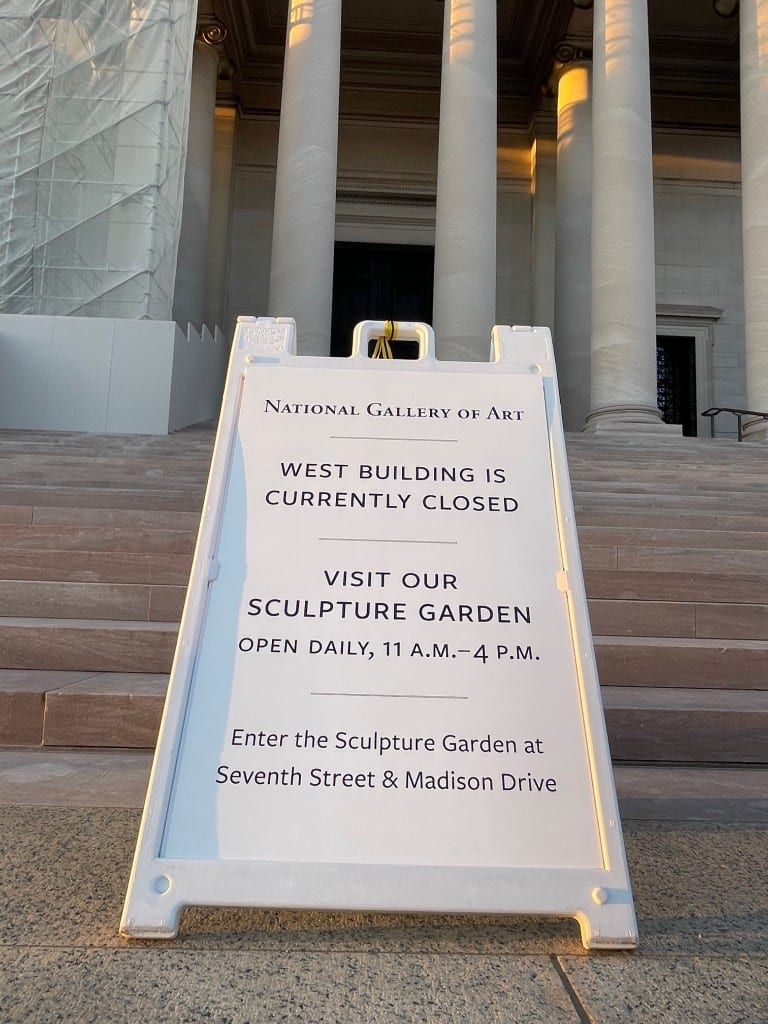 While Bowser has focused most of her attention on destroying the tourism industry, ruining our children’s futures, and painting large BLM letters to appease her woke base, shootings and violent crime have spiked considerably. According to data from the Metropolitan Police Department, 2020 saw a 19 percent increase in homicides, making it the deadliest year in the District since 2004. Ninety-five percent of the homicide victims were Black, and about 80 percent of those victims were Black men. Curiously, neither Bowser nor BLM seemed to have much to say about this. There was also a 64 percent increase in shootings from just three years ago, with more than 920 people shot. Arson also increased by 63 percent, and motor vehicle theft increased by 50 percent.

Even the more affluent parts of downtown D.C. haven’t escaped the city’s decline. One block north of the White House, the luxurious five-star Hay Adams and St. Regis Hotels are now part of what has been renamed BLM Plaza at Mayor Bowser’s behest. Thirty-five-foot-long yellow letters are now emblazoned on a two-block stretch on 16th Street Northwest that is barricaded off to traffic and frequented by individuals who harass, terrorize, and threaten to kill citizens, including this author, who made the mistake of walking through the plaza wearing a MAGA hat on the way to the White House last July. The few guests who are willing to spend $400 plus per night at either the Hay Adams or the St. Regis might be in for a surprise when they find out they may have to walk past drug addicts and police barricades just to get to their Uber.

Many visitors come to D.C. to catch a glimpse of the White House, but even that remains closed off.

The entirety of the President’s Park is closed off by fencing that encompasses Lafayette Square, just north of the White House, the Treasury Building to the east, the Eisenhower Executive Office Building to the west, and the Ellipse, just south of the White House. The famous Andrew Jackson statue in Lafayette Square, which BLM rioters attempted to rip down last summer, is also barely visible. It remains enclosed by a second fence, in addition to the one that lines the perimeter of the park. The Secret Service, D.C. Police, and National Guard continue to patrol the outer grounds of Lafayette Square 24/7, just in case “All the president’s men” do decide to show up.

St. John’s Episcopal Church, across the street from the Hay Adams — the church whose nursery BLM anarchists and arsonists set on fire last summer — remains boarded up. The Ronald Reagan Institute, which is also inside BLM Plaza, is boarded up as well. The public parks near the White House, including McPherson Square, Farragut Square, and Dupont Circle, are full of trash and litter and overrun with drug addicts and the homeless, who have set up encampments for months on end.

On a recent warm and sunlit Saturday afternoon in March, the chairs at the outdoor restaurant of the famous W Hotel (across the street from the fenced-off Treasury building), would usually be packed and bustling with people, but instead they sit vacant. The same was true right next door at the Occidental Grill, except that no one even bothered putting any chairs out. Who knows when or how long it will take for D.C. to return to normal. 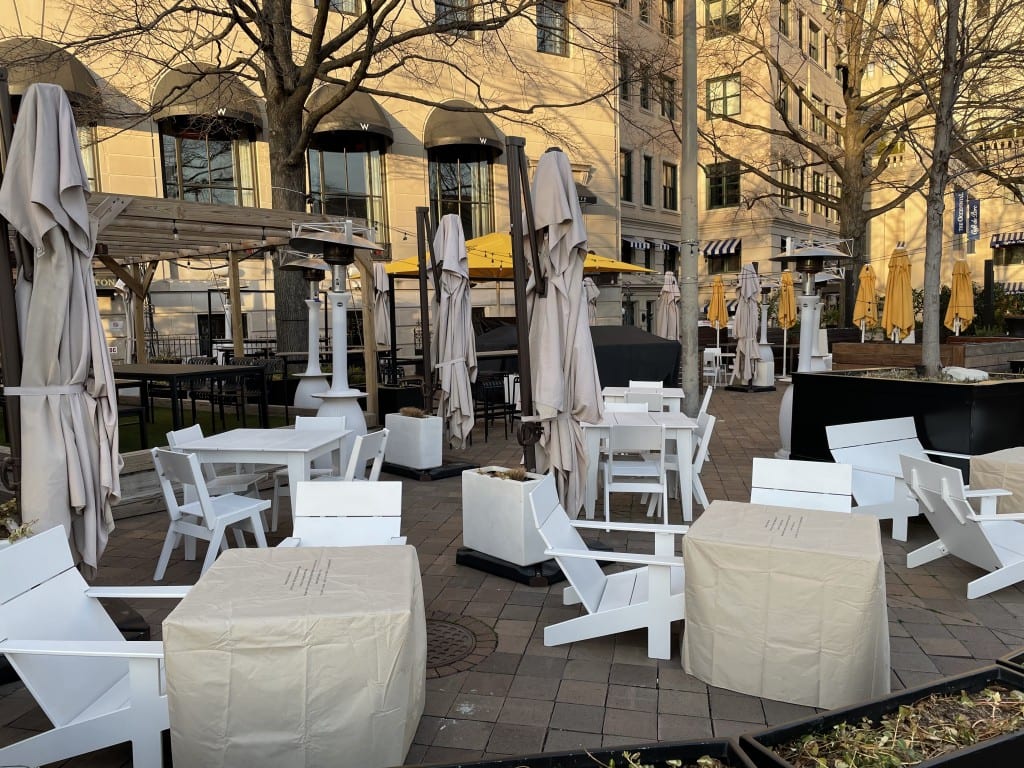 Not to worry though: help is on the way. President Biden is sending the district $755 million as part of his “COVID relief bill,” which he signed into law last week. Bowser, who could hardly control her excitement, posted a letter thanking the bumbling president on her Twitter page. “The $350 billion set aside for state and local relief is critical for jurisdictions to nimbly respond to the needs of our residents,” she wrote. In reality, it is not “relief,” it is a bailout for a horribly mismanaged city, run by an incompetent mayor who does not appear to have any intentions of reopening D.C. in the near future.

Until the district does finally reopen, Bowser seems content to allow this once-great city to decline, while Biden seems content with allowing the left-wing radicals in his administration to destroy this great country.

David Keltz was a speechwriter for the Administrator at the U.S. General Services Administration from 2020–21 and is the author of Media Bias in the Trump Presidency and the Extinction of the Conservative Millennial. He previously served as a White House Intern for Vice President Mike Pence.