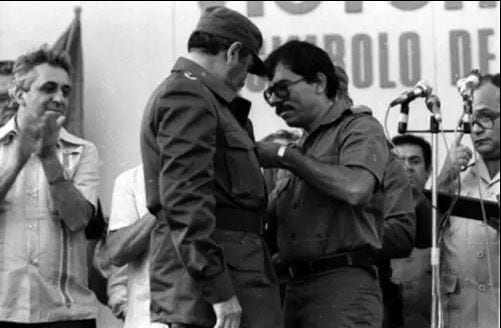 This week, Nicaraguans once again faced bloody violence at the hands of Daniel Ortega’s government. Protests against the government have been ongoing since April, but this week has been particularly bleak.

On Friday, government forces attacked hundreds of protesting students from the National Autonomous University of Nicaragua. Many of these students hid in the Jesus of Divine Mercy Church, in hopes that they would be left alone. This was not the case, police shot at them from outside of the church.

The church was able to negotiate with the government for safe passage out of the church on early Saturday morning, but by then, two students had already been killed.

On Sunday, ten people were shot dead when government loyalists attacked protestors. They also attacked a Catholic Bishop, who managed to escape unscathed.

On Tuesday, government forces attacked protestors occupying the Monimbo neighborhood in Masaya, a city Southeast of the capital. At least three people were killed, dozens were injured and some individuals are reported to have been “disappeared.”

Tuesday’s crackdown was an attempt to restore order before Thursday, the 39th Anniversary of the Sandinista uprising that deposed the Somoza dictatorship, and replaced it with an equally as terrible communist dictatorship. Ortega wants things to be perfect ahead of the celebrations, even if that means cracking a few skulls.

Daniel Ortega’s current presidency began when he won the 2006 election, but he also ruled from 1979 to 1990. First getting involved in the far left as a teenager, he was arrested multiple times for his activities, including bank robbery. After Ortega’s release from prison in 1974, he fled to Cuba, where he received guerrilla training from the Castro regime.

In 1979, the Sandinistas finally achieved victory over the Somoza government, with Ortega at the helm. While many hoped that the change of rule would bring better conditions, it did not. Communists always make things worse. Ortega ruled with an iron fist, tens of thousands of people died, millions of Nicaraguans fled to America and elsewhere, the country was economically stagnant and impoverished, and Miskito ethnic minorities were brutally oppressed. Ties with the Soviet Union and other communist countries ran deep, earning Ortega the ire of the Reagan administration and a Red Dawn appearance.

These atrocities went on until 1990, when opposition parties rallied to defeat Somoza at the ballot box, not in the jungles and the streets. For 16 years, Nicaragua was able to recover from the brutality of the Sandinista regime under Ortega, though he always maintained a presence. Ortega ran in every subsequent election, and won in 2006 with the help of Venezuelan money.

After this election, he began to cement his authoritarian rule once again. He removed term limits, kicked his opponents out of the national assembly and generally strengthened his grip on Nicaraguan governmental institutions. He has become so certain in his ability to rule absolutely that he appointed his own wife as vice president, the same wife whose daughter he sexually abused for years.

What started out as a protest against social security cuts in April has turned into all-out civil disobedience. Students, faith leaders, social activists, and ordinary citizens are calling on Ortega’s government to end authoritarian and oppressive tactics, and have called for early elections (the next elections are scheduled for 2021). In the course of these protests, hundreds have been killed and many more have been injured and imprisoned. Ortega’s oppression isn’t stopping activists, it’s energizing them to fight for change.

The international community has also come out strongly against Ortega’s actions. The UN, European Union, and Organization of American States have come out against Ortega’s crackdown.  In the US, State Department spokesperson Heather Nauert condemned recent violence in an official statement on Monday, stating that “the Nicaraguan government must heed the Nicaraguan people’s call for democratic reforms immediately,” and that “the United States will continue to expose and hold accountable those responsible for the Ortega government’s campaign of violence and repression.” These words come after strong action earlier this month, in which three top Nicaraguan officials were sanctioned for their roles in the ongoing violence.

In the Senate, bipartisan leaders including Ted Cruz, Marco Rubio, Bob Menendez and Tim Kaine introduced the Nicaragua Human Rights and Anticorruption Act of 2018. This Act would urge for early elections, greater intelligence efforts to expose human rights abuses, and sanction more elements of the Nicaraguan government responsible for the violence and other authoritarian activities.

The people of Nicaragua, and the world, have had enough. It’s clear that Ortega and his communist government are going the way of the Soviet Union and the Dodo. The question is, how much of a fight is he going to put up?