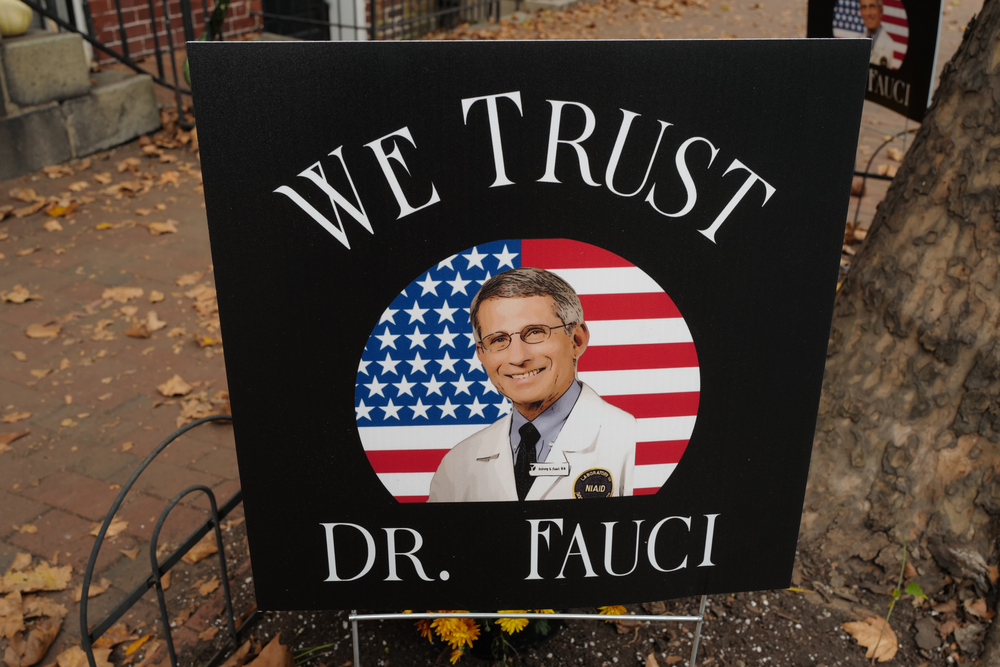 Recent events have rendered it all too obvious that the politicians and bureaucrats charged with overseeing the nation’s response to the COVID-19 pandemic are determined to use it as a pretext to restrict our civil liberties indefinitely. They refuse to provide coherent answers to simple questions about their plan for returning the country to normal, yet insist that we adhere to mitigation strategies that have been shown to be ineffective in practice and inconsistent with basic science. Meanwhile, they collude with news outlets and social media platforms to censor respected epidemiologists whose recommendations conflict with the pseudoscientific piffle promulgated by the Biden administration’s public health “experts.”

An example of the administration’s refusal to outline a coherent strategy to get us back to normal was provided by “America’s doctor,” Anthony Fauci, during last Thursday’s hearing of the House Select Subcommittee on the Coronavirus Crisis. Fauci’s written testimony warned, “Now is not the time to pull back on the effective public health measures such as masking, physical distancing, and avoiding congregate settings that we know help limit the spread of SARS-CoV-2.” Rep. Jim Jordan (R-Ohio) asked an obvious question: “When is the time, when do Americans get their freedom back?” Fauci provided a typically circular response: “When we get the level of infection in this country low enough that it is not a really high … ”

Jordan interrupted with a request for specificity: “What is low enough? Give me a number … What metrics, what measures, what has to happen before Americans get more freedom?” Fauci predictably accused Jordan of attacking him personally. Jordan persisted, “I’m asking a question: what measures have to be attained before Americans get their First Amendment liberties back?” Fauci remained evasive until he was rescued by Subcommittee Chairman James E. Clyburn (D-S.C.), who told Jordan his time was up. Throughout this exchange, Fauci wore a cloth mask that a peer-reviewed study published by the very agency that employs him, the National Institutes of Health (NIH), has pronounced useless against COVID-19:

The existing scientific evidence challenges the safety and efficacy of wearing facemasks as preventive intervention for COVID-19. The data suggest that both medical and non-medical facemasks are ineffective … Wearing facemasks has been demonstrated to have substantial adverse physiological and psychological effects. These include hypoxia, hypercapnia, shortness of breath, increased acidity and toxicity, activation of fear and stress response, rise in stress hormones, fatigue, headaches, decline in cognitive performance, predisposition for viral and infectious illnesses, chronic stress, anxiety and depression.

This brings us to the Biden administration’s ineffective mitigation strategy. In addition to having little or no basis in science or medicine, its messaging and execution has been hopelessly inconsistent. Shortly after the 2020 election, Biden himself told America that wearing a mask was a temporary measure: “Just 100 days to mask, not forever. One hundred days.” Inevitably, he changed his story. Last month, he said we should expect to wear masks until 2022. And Fauci’s flip-flops on masking have been dizzying. In March 2020, the good doctor told us not to wear masks. He later reversed this stance and eventually began to advocate double masking, a position for which there is little scientific support.

This is typical of Fauci’s disregard for science. A year ago, for example, he lambasted Florida Gov. Ron DeSantis (R) for considering rapid reopening of schools. Fauci claimed the children would “likely get infected.” DeSantis consulted experts from Stanford, Harvard, and Oxford who told him the infection rate among school-age children was negligible. He reopened the schools and Florida has the lowest COVID-19 death rate of any of the four largest states. This good deed couldn’t go unpunished. DeSantis held a public policy roundtable with the same experts and YouTube censored a video of the event. Dr. Jayan Bhattacharya, a Stanford physician who participated in the roundtable, protested in the Wall Street Journal:

YouTube’s action violates basic standards of scientific conduct. The company labeled our discussion on masking children as “misinformation” without providing any detail about its scientific reasoning.… Even worse, YouTube’s censorship runs contrary to American norms of free expression. It serves only to blind the public on a topic of intense interest; Americans have a right to know the contours of the Covid-19 debate. YouTube may have a legal right to censor a public hearing. But companies with such tremendous power over the flow of information should adopt more responsible editorial standards in their censorship decisions.

YouTube should also be careful about whom they censor. They have made a significant mistake by pulling down the DeSantis roundtable. He will make sure that it focuses a lot of attention on the abuse of protections enjoyed by YouTube and its parent company Google under Section 230 of the Communication Decency Act. This episode, combined with the de-platforming of former President Trump, will increase pressure on politicians who have the power to amend Section 230 to end such abuses. Typical of Gov. DeSantis, he responded by putting together another roundtable with the same participants wherein they discuss the damage censorship will do to genuine science — and posted it on YouTube. Watch the discussion here.

DeSantis is clearly daring YouTube to censor this video. Some of the roundtable discussion returns to the incompetence of “America’s doctor.” Dr. Martin Kulldorff, a Harvard biostatistician, points out that you no longer need to wear a mask two weeks after being vaccinated and that, “When Dr. Fauci goes out and says you still have to wear a mask, it reduces public trust in vaccines.” This is the kind of thing the Biden administration doesn’t want us thinking about. For them, it’s all about power, and they will continue to give us the mushroom treatment as long it provides a pretext to restrict our civil liberties.