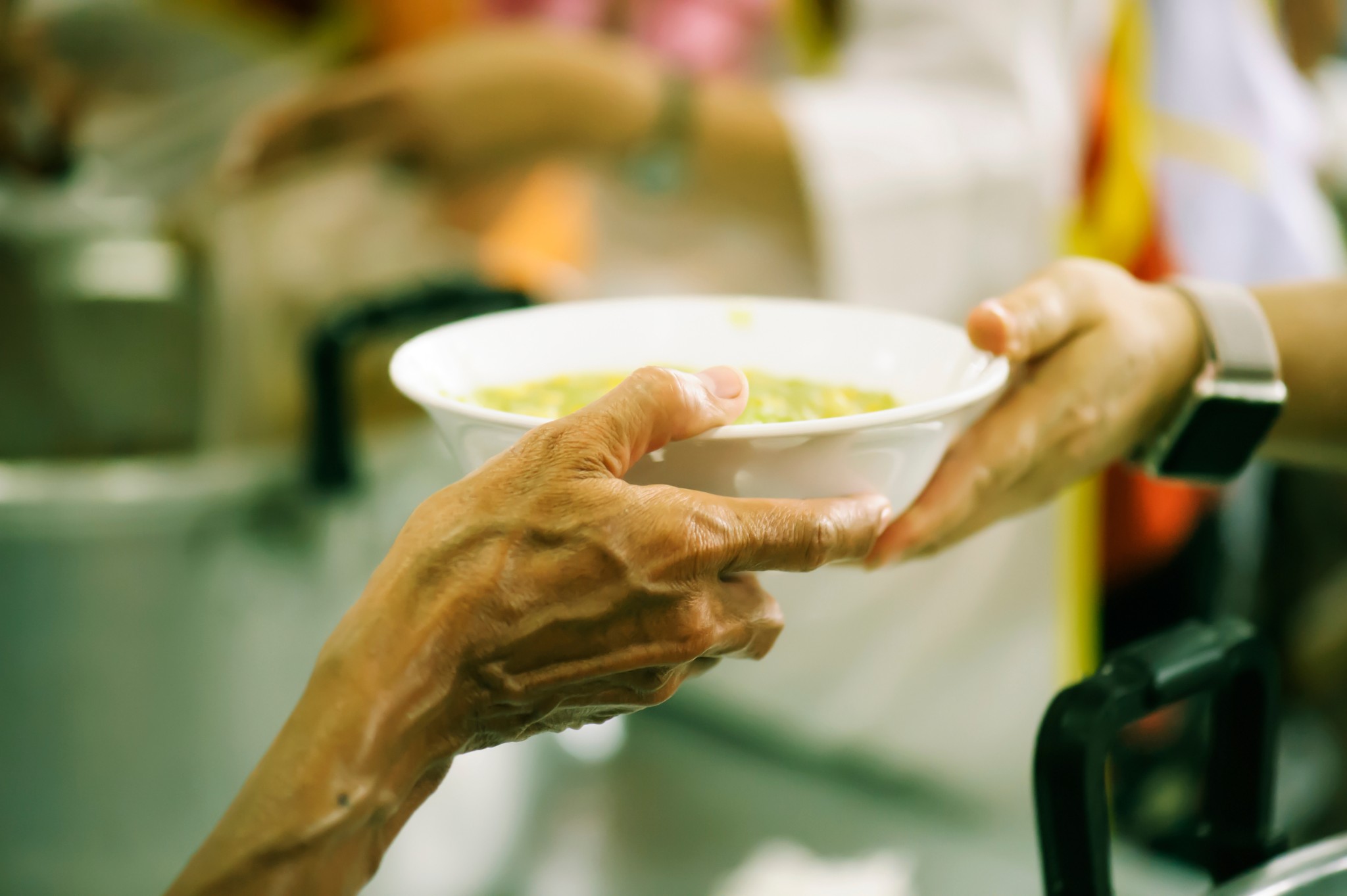 So long as you have food in your mouth, you have solved all questions for the time being.
— Franz Kafka

I started volunteering at a soup kitchen a few years before the pandemic. The program that I volunteered for was more than what most people might imagine a soup kitchen to be. It was certainly an eating facility but also served as a provisional shelter and refuge for various sorts of destitute individuals from November through March, the coldest months of the year in a chilly northern city. Every Thursday we provided a hot meal in the evening to indigent men, some, though not all of them, being homeless, and along with this we also offered foot care, a “clothing and accessory boutique,” and sleeping facilities for a portion of our guests. The reason that I call it a refuge is that unlike many government-run shelters it was safe and peaceful so it attracted guests who either wanted to get away, at least briefly, from government shelters or who wanted a break from sleeping rough during the winter.

When I entered the auditorium where the meeting was held, my heart sank. All of the panelists at the front of the room were wearing masks and sitting in chairs nicely spaced apart.

We volunteers were divided into assorted types of crews doing a variety of tasks during the course of different shifts of the day and night. During the afternoon a crew came in whose work was to purchase the food for the evening meal and cook it. One day our supervisor, thinking that there would not be enough food, panicked and impulsively bought $200 worth of beef tenderloin, one of the most expensive cuts in the market. Back at home base, recognizing her folly and knowing that even if the supermarket allowed her to return it health regulations required that it be discarded, she managed to persuade a few of us to buy it from her and repaid the money to the kitty.

The buyers and cooks were followed by a crew who came in early evening to serve a hot meal to about 120 guests. The meal consisted of soup, a salad, a choice of two different entries, two sides, and a choice of dessert and/or fruit. It was all simple home cooking. Another part of that crew did the foot care for guests that were sleeping rough. Later in the evening there were some of us who came in to serve latecomers, clean up the kitchen, and simply sit down and chat with the guests. For certain of our guests this socializing was the most important service of all.

One evening when I was on the night shift my supervisor summoned me from my duty of cleaning the grill to talk with one of our guests who was bereft because he had just lost his dog. She called on me to do this because from prep work conversations I was known to be a rather serious dog lover. I spent about an hour reminiscing with him and comforting him about the loss of his canine friend.

Somehow word got out about what had happened and for a while our conversation drew the attention of others. At one point we were interrupted by a young man who had taken off his shirt and was wearing only a singlet above the waist. He wanted to inform us that he had just cashed his welfare check and with the money had purchased two monthly bus passes and also bought air time for two cell phones and he and his girlfriend were planning on using these purchases in order to look for work. Now he was almost out of cash so he had come to us to save a little money.

After the bereft dog owner had retired for the evening, I was approached by a smartly dressed late middle-aged man who wanted to show me something on his cell phone, which for the moment was not working. He said that he had been a successful businessman who had had a factory that manufactured window coverings. He had given much of his money to a son to buy a house and then had gone bankrupt and was now broke. He was now trying to scrape together enough money for a rent deposit on an apartment so that he could start over again. He said that he was being helped a bit by a daughter in Israel who was making a good living raising strawberries. When he finally got his phone to work, he showed me pictures and messages from his daughter in Israel that corroborated at least this part of his story. So go the tales of the indigent in a big chilly city.

About 80 of our guests spent the night. After supper we showed a mindless movie and then they bunked down on thick mats spread across the floor. When you see a large number of people settling down for the night as if in a big barrack you notice that everyone has a different way of making themselves comfortable and their postures seem to be as varied as fingerprints. In this crowd occasionally one showed up with a book and flashlight and did some reading before going to sleep. Officially, we were a male-only facility but if occasionally someone showed up with a female companion, we always let that pass; there was never any sex, only cuddling. Our guests were a self-selected group of people who were down on their luck, and almost all were polite, appreciative, and respectful. There was no drug use and no violence to speak of. The only exception to this that I remember is when one night one of our guests showed up belligerent and in disarray. He picked a fight with one of the other guests and in the tussle that followed the other received a scratch on the back of his hand. The unruly one was promptly expelled.

Before the night crew left, we laid out some snacks and drinks for people to help themselves during the night. In the morning a new crew came in to give the overnight guests a hot breakfast, and after that they were sent off with a brown bag lunch.

All of this ended with the pandemic.

The year before the pandemic I had switched to another division of this program that was sponsored by a single well-endowed organization and housed in a very fancy, spanking-new building. Just before the first cold season of the lockdowns arrived, we volunteers were informed that the program had been canceled “for health and safety reasons.” The same thing happened the year after. This year, as November approached and most pandemic restrictions had been lifted, I inquired when we were going to start up again. I was told to come to a meeting where we would be discussing the matter. I was told that there would be a panel of experts who would discuss food insecurity in the city and that we would also discuss the future of the program. I thought that this was going to be an organizing meeting, but it turned out that I was mistaken.

When I entered the auditorium where the meeting was held, my heart sank. All of the panelists at the front of the room were wearing masks and sitting in chairs nicely spaced apart. There were also a few masked members of the audience, but none of the front-line volunteers who attended were wearing masks.

The presentations of the panelists were mainly abstract. They told us about things we already knew. They talked about how the lockdowns had exacerbated food insecurity in the city, about how difficult it had been for organizations such as ours to operate under lockdown restrictions. In contrast, during the question period the maskless frontline volunteers in the audience asked only about when the program was going to start up again. One of us pointed out that before the pandemic the program had been running for 25 years, so why not pick up where we had left off? We were told that the matter was complicated; it was being reconsidered in terms of health and safety concerns, community needs, and so forth. The moderator kept emphasizing that she did not know when or if the program would start again. It was necessary to do community outreach, to assess the need. What to do? It was all so mysterious. Various committees were going to address various aspects of the matter and get back to us. It was hinted that some sort of program might start up in January, or maybe not.

Those who are still sporting masks and social-distancing outside of hospitals have been called COVIDians. You see them in the street, and they have been mocked by some pundits and excoriated by others, but few are in the position of making decisions for others than themselves. Now that it is becoming increasingly impossible to dispute the enormous gratuitous harm done by the crazy pandemic lockdowns, some of the COVIDians have started pleading for amnesty while others, it would appear, are still clinging to the old script. The climate of fear induced in society by many of our leaders lives on in pockets of society. Perhaps it will live on in these enclaves forever. They have been compared to the Japanese soldiers living in caves who kept thinking that they were still fighting World War II well after it was over.

It is said that the poor will always be with us, but what is left unsaid is that so too will be the fools and knaves who manufacture poverty for others. Too many spirits have been broken by them. It’s tragic that a program such as the one I volunteered in should be shuttering itself just at a time when the need for it has become even greater. Nevertheless, similar organizations have adapted to these times and even stepped up their game. No one can say if and when we will ever get back to normal again, but those with healthy instincts will keep trying to do so.