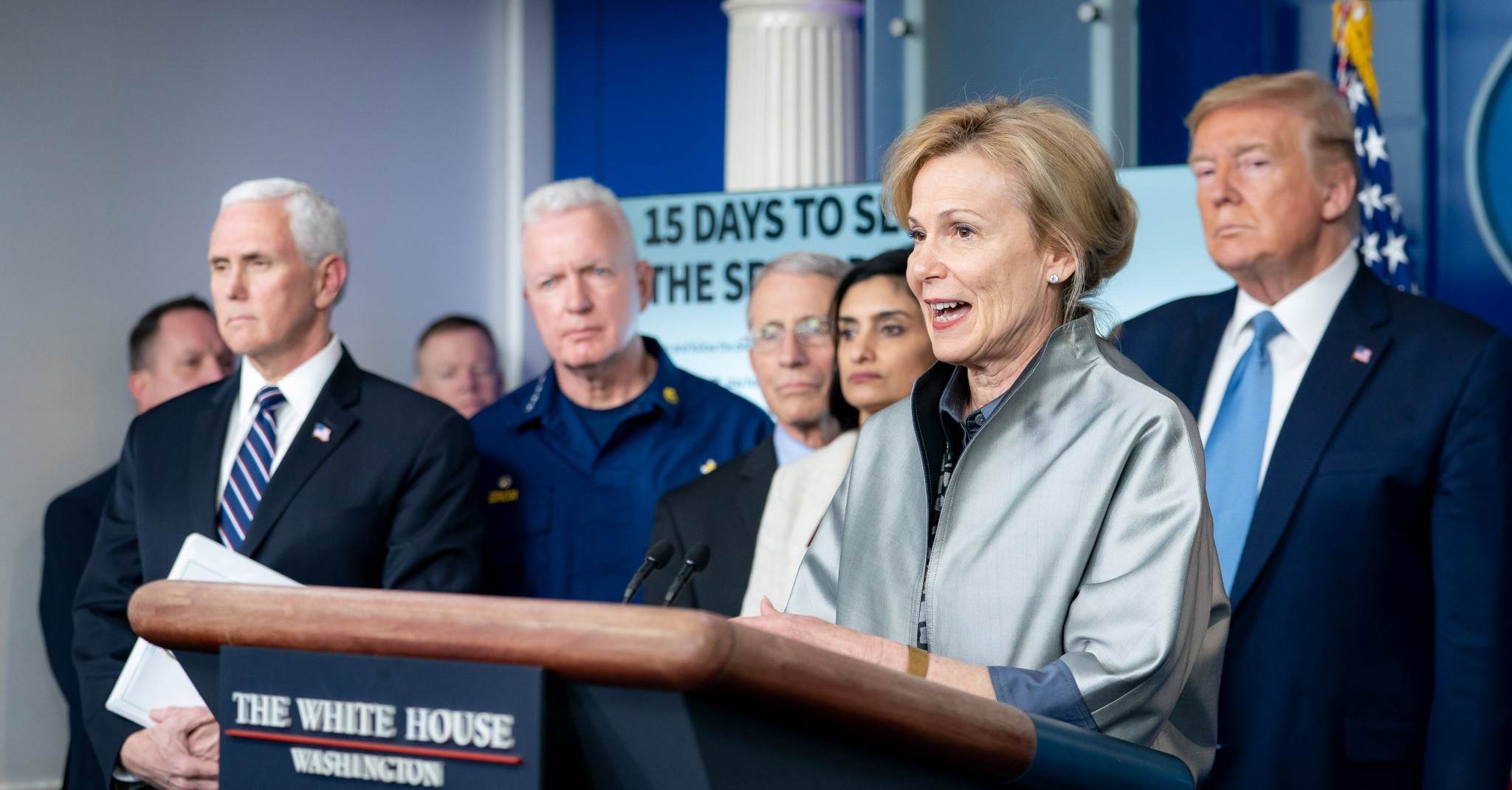 More Politics
Sign Up to receive Our Latest Updates!
Register
Hot Off
The Press
Special Report
Yes, Fauci, Monkeypox Is a ‘Gay Disease’
by Michael Fumento
Public Depravity
The Fascist Bureau of Investigation
by Jeffrey Lord
Biden Watch
After Quarantine, Vacation: Biden Stays Out of Sight
by Ellie Gardey
Hither and Yon
Five Quick Things: The FBI and the Consent of the Governed
by Scott McKay
Flynn Files
Biden the Wrong Kind of Clintonian on Economy
by Daniel J. Flynn

The U.S. is nearing the fourth year of the post-COVID-19 world. While the coronavirus remains a pandemic, its evolution into endemic status is within sight and some degree of normalcy has returned to daily life in most places. While it is certainly not “over,” we are far enough along in our experience of SARS-CoV-2 to make initial observations not only as to the biological science applied to combatting the virus, but to the social science of managing a pandemic and calculating the net impact of the public health response through a comprehensive cost-benefit analysis.

Some will have an instinctive aversion to any objective assessment of the governmental and societal response to the advent of COVID-19 based on the premise that “we’re still in this”; i.e., it’s too soon for any durable takeaways and the fog of war one might expect in any fight against a new and highly infectious viral pathogen warrants allowing sufficient time for it to lift. Others will resist such retrospection because an objective consideration of the pandemic may be distasteful and reflect poorly on themselves.

To the contrary, it is precisely for these reasons that such an assessment is necessary. We are hardly clear of the more controversial elements of the policy response to COVID-19: the San Diego Unified School District recently reinstated its indoor masking mandate at all school campuses and district offices and the Biden Department of Justice still seeks to overturn a federal judge’s April decision declaring the government’s transportation-related mask mandate to be unlawful.

Moreover, a functioning polity should assess its representatives’ performance — and that of the society in which it takes place — so as to be better prepared for (or at least more clear-eyed about) future public health challenges and other existential crises. Most importantly, as confidence in public officials at all levels hits new lows, it is crucial that lessons are not only learned from our recent experience, but also that accountability is maintained.

For these reasons, a COVID-19 Truth and Reconciliation Commission — modeled on the post-apartheid South African body charged with investigating egregious human rights violations, and similar to other such bodies created and tasked with bringing past wrongdoing to light in the hope of resolving past conflict and (ideally) reconciling a divided society with itself — is particularly appropriate in today’s bitterly partisan and rancorous environment.

Surely, the events of the past few years are hardly comparable to pre-Mandela South Africa. What, then, might such a COVID-19 commission find worthy of investigation? A partial list might include:

Errors in analysis or execution due to uncertainty or expediency during a crisis are, if not always defensible, at least understandable. Outright disinformation communicated by the highest levels of government is, on the other hand, not only inexcusable, it demands consequences. Just over a year ago, a U.S. president stated during a CNN town hall that “you’re not going to get COVID if you have these vaccinations” (nearly a year to the day later, notwithstanding his vaccinations and multiple boosters, President Joe Biden himself contracted COVID-19). Later, in January 2022, he stated that COVID-19 continues to be a “pandemic of the unvaccinated.” These are but two of countless untruths retailed by public officials and the opinion class in service of a political agenda, not in the interest of public health policy. Mendacity proffered to vilify outgroups is the stuff of totalitarian regimes, not a democratic republic.

The impact of vaccine skepticism

As the development of experimental vaccines accelerated under the Trump administration’s Operation Warp Speed, a number of prominent Democratic figures — including the current vice president — expressed doubt about the reliability of vaccines. When asked about the vaccines, Harris said, “I will say that I would not trust Donald Trump.” For his part, Biden during the 2020 electoral season on multiple occasions questioned the safety and efficacy of such vaccines. Statements such as these did much to undermine public confidence in the subsequently commercialized coronavirus vaccines, particularly when the very same figures expressing caution about the vaccines not only later promoted them but shamed those of similar skepticism once they themselves had acceded to power.

An October 2021 survey by CNBC estimated that 5 percent of unvaccinated adults quit their jobs as a result of COVID-19 vaccine mandates. In the 20 months since the vaccines were first made widely available, they have come to be better understood as preemptive therapeutics that, at best, offer limited and short-lived protection against contracting the virus, along with some benefit in minimizing the severity of any ensuing infection. Even military personnel are not exempt from mandates; the Department of Defense issued service-wide orders that all members of the armed forces be vaccinated prior to June 30, 2022. On top of individual COVID-19-related job losses are the myriad businesses damaged and destroyed by being deemed “non-essential” in jurisdictions where (for example) liquor stores were allowed to remain open, while churches were not.

We now know that the masks most of us wore (and continue to wear) were of limited efficacy in preventing infection and slowing transmission. Nevertheless, not only do mask mandates continue, they are being reinstated — with the prospect, for example, of their reimposition in Los Angeles County at the end of this week. In New York City, mask mandates were only ended for children under 5 years old — a group now widely understood to be at infinitesimal risk of contracting COVID-19 — a little over one month ago. What is the public health imperative at work in these policies?

Rules for thee, but not for me

Whether it be California Gov. Gavin Newsom’s visit to the French Laundry in Napa Valley while discouraging residents’ Thanksgiving travel and family gatherings, or masked servants photographed in the background behind gloriously mask-free progressive celebrities and politicians at the Met Gala, coronavirus restrictions have served as yet another object lesson of the two sets of rules which apply in American society — one for the elites, and another for the rest of us.

The impact of school closures and distance learning on the emotional, intellectual, and social development of our children is only now coming into focus. What is known is that teachers unions such as the American Federation of Teachers in many cases conspired with public officials to keep schools closed and students masked in contravention of “The ScienceTM” out of naked self-interest and in service of a political agenda.

The origins of COVID-19

As the news of a viral outbreak in Wuhan made its way around the world, the Chinese government, the World Health Organization, the Centers for Disease Control and Prevention, and the National Institutes of Health engaged in efforts to stifle any investigation of COVID-19’s origins. Major media and Big Tech silenced any hypothesis of a lab leak at the Wuhan Institute of Virology, which included the possibility of an engineered virus. News reports consistently described any such assertion as “debunked”; social media and other technology platforms suppressed or slapped “fact check” legends on any theory or argument contrary to the accepted line. In an interview this past weekend, Dr. Anthony Fauci finally acknowledged publicly what most long ago had accepted — that he is keeping an “open mind” on the theory of a lab leak. At press time, Google and Facebook had yet to issue apologies.

The role of Big Tech more generally during the pandemic

Beyond the squelching of the lab leak hypothesis, social media and technology platforms routinely muffled debate or any statements deemed to be at odds with the accepted narrative. Many of the views so expressed — including questioning the utility of mask mandates, value of social distancing, net benefit of lockdowns, efficacy of the vaccines, risk from infection among young and healthy populations, and myriad other positions — are now largely viewed as at least defensible, if not proven outright.

Life among the mob

Weaponized by the likes of Facebook, Twitter, and YouTube, “right-think” was enforced with ruthless efficiency. Beyond simply banishing outré views, the mob readily turned on its fellow citizens. Consider these nuggets from the not-so-distant past: “fire the unvaccinated,” “you’re selfish not to wear a mask,” “send the unvaccinated to fight in Ukraine,” “Trump voters eat horse paste,” etc. In this view, dissenters no longer hold a different opinion — they’re a threat to public health and the American way of life.

A commission would need to thoroughly examine each of these phenomena, faithfully detail what occurred, determine what aspects of society contributed to them, identify those parties culpable of engaging in willful bad faith and disinformation (as contrasted with errors in judgment made under ambiguous circumstances), and foster accountability in the form of commitments to address institutional failure and abuses of power.

While it is now fashionable to trash institutions — the left works to destroy them from within, while the right seeks to supersede them — in an actual emergency, it is vital that they function properly. Faith in government, the media, Big Tech, and other pillars of civil society are at a dangerously low ebb. America’s experience with the COVID-19 response has undermined public confidence that its institutions will rally to address existential threats to the nation and its people.

Absent a comprehensive accounting of the COVID-19 response, imagine some future pandemic, featuring an Ebola-like virus but with COVID-19’s infectiousness and transmissibility. Do you trust your government and institutions to respond in a rational, fact-based manner, informed by objective cost-benefit analysis, neither politicized nor viewed as a crisis not to be wasted and used to catalyze a “new normal” or Great Reset?

And do you believe the American people will again show compliant obeisance to the authorities in the face of peril?