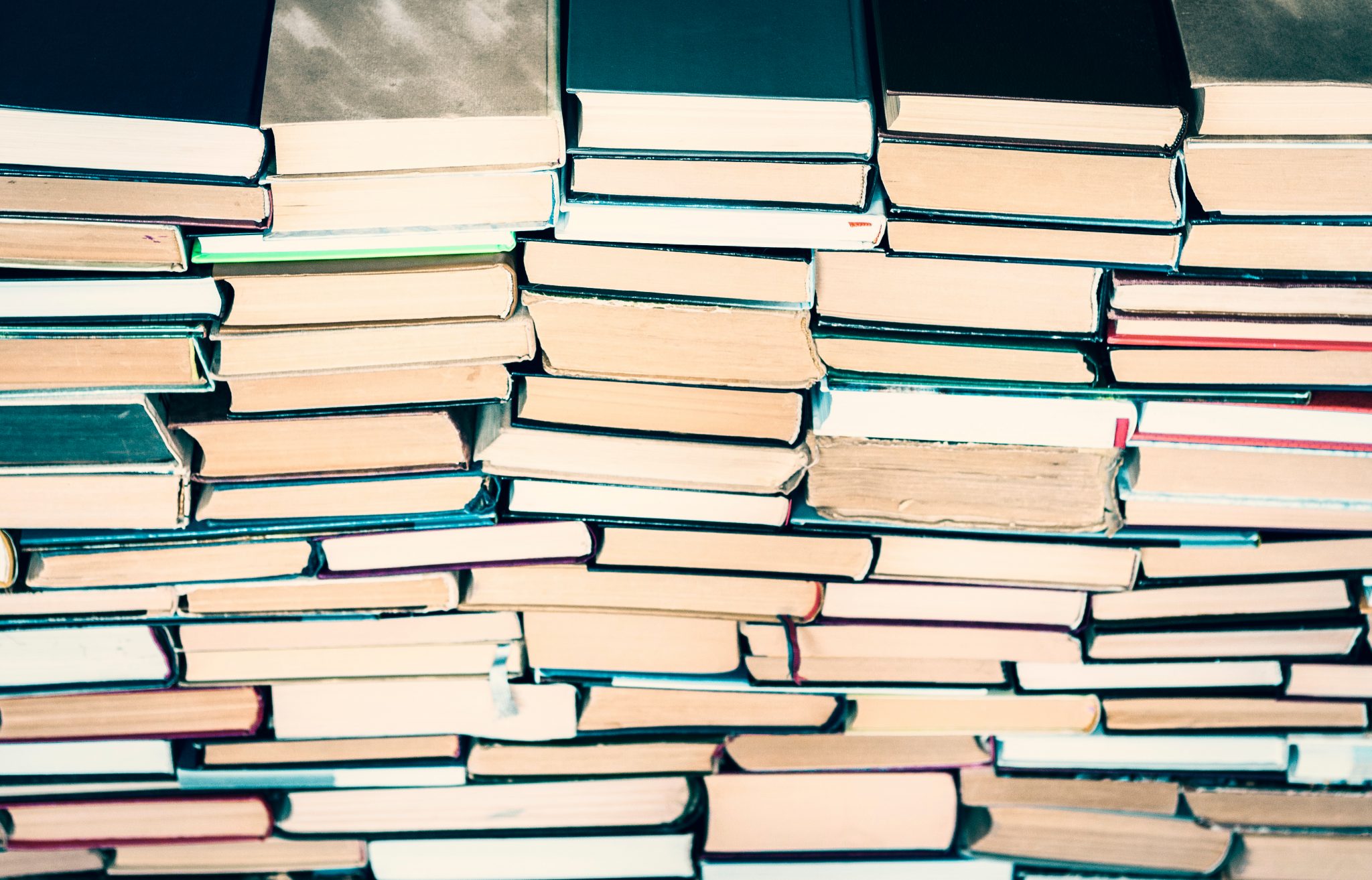 The viral contagion sweeping over the world has forced many people to work from home for the first time. For me it is natural. I haven’t labored in an office since the magazine I edited folded in 1984. These days my only non-negotiable condition for any job offer is that I not have to work in an office.

Still, being effectively confined at home is unique. I normally travel a lot and get out of the house for everything from errands to social calls. Having left my house only two times since mid-March, to get groceries, I am tiring of my informal “office,” which has served me so well the past 36 years.

There is, however, one huge benefit of staying home. I am getting back into reading. Real books.

I always leaned towards academics and enjoyed reading. My family ended up in Great Britain for three years, courtesy of the U.S. Air Force, in which my father served. At the base bookstore I spent an inordinate share of my money — allowance and earnings — on books, with a special emphasis on World War II, which continued to weigh on a people whose country was barely a quarter century away from the slaughter. Those books returned with me to America and remain in my library today.

History was my first love. Trying to understand how we got where we are today interested me. I was most fascinated by periods of turmoil and crisis, when the future of nations, continents, and peoples was decided. In community college I was a day late with a paper because I was busy consuming the last of the three volumes of Aleksandr Solzhenitsyn’s The Gulag Archipelago. How could people be so cruel to one another? How could someone survive such a travail? How could one person shake what I recognized even then was an evil empire by writing a book?

Out of law school I ended up on the campaign trail with Ronald Reagan. I always had books with me, though there wasn’t much personal literary time in the schedule. But after Reagan’s victory made my sojourn in the D.C. area permanent, the rest of my books came out. And the plethora of used bookstores offered me years of happy shopping, pulling off the shelves sometimes wonderful, obscure tomes on bizarre historical controversies. I even had bookcases dedicated to my “to read” books. I eventually realized that I would need two or three lifetimes to ever read them all. But that never stopped me from hitting another bookstore and leaving with a couple bags or even boxes of new acquisitions.

Early on I realized the utility of always carrying a book. It didn’t matter if I had to wait. Whether I was standing in line, waiting for a lunch mate, or suffering through the final few minutes before a concert, I could pull out my book. I might prefer to have been reading at home. But my time was not wasted. Peace reigned in my soul even as the minutes ticked away.

I had one friend who shared my passion for reading as well as my determination to not let even one minute of potential reading time go to waste, and he also “carried,” as one might say. We regularly met for lunch at a local pizza place, and one of the waiters eventually asked us if we worked at a book club. He’d noticed that we both always had books with us.

Books also were essential for travel. That was tough back when books really meant books — no Kindles or other electronic devices. Packing for a week or two overseas was particularly difficult. How many books would I need? How much time on the plane? And on buses? And waiting for everyone else?

Pack too many books and your arms get a workout — this was before wheeled luggage. Pack too few and … even worse. It is hard to describe my fear of getting caught with down time and no book to peruse. Years later, the New York Times ran a wonderful article by an American traveling in Spain, I believe, who ran out of books to read. She discussed the interminable bus rides, the late arrivals with local bookstores closed, and the difficulty of finding English-language tomes. I circulated it widely, hoping to explain my deep phobia to friends whose passions were elsewhere.

Even after I bought a Kindle, I was reluctant to use it. Books are special. Years ago I met Civil War historian and now-retired professor Gary Gallagher. He mentioned the possibility of inviting me down to Charlottesville, Virginia, where he taught, so we could “fondle books” together. Although the get-together never happened, holding and perusing the real thing yielded great, though entirely chaste, pleasure.

Still, I’ve come to appreciate my Kindle for my longer journeys. No longer do I have to worry about being without reading material. I started exploring some of the literary classics I never read in school. For instance, I hit “the Russians”: War and Peace, The Brothers Karamazov, Anna Karenina. They all were frankly depressing, but at least I could claim to have renewed my education after reading them.

Alas, when on the road I found I had ever less time for all my “to read” books. In between trips, at home I tended to work. While on the road my Kindle took over book duties. The steady closure of bookstores — several of my favorites disappeared without me knowing, taking my accumulated credit with them to their financial grave — ended my regular buying missions. Still, I occasionally picked up something on Amazon or otherwise, leading to steadily growing book piles on the floor as well as the shelves.

Then came the order to stay home.

I had plenty of writing to do. But with neither traveling nor socializing, I had genuinely free time. Some of it went to trying to clear up the chaos: paper piles had metastasized over the years, taking over virtually every room in my house. It long had been easier to push materials from a project aside than to file or toss them.

There were also a lot of books to put on shelves somewhere.

The “to read” books started calling to me. Some were pure work, or almost so. But many were genuine pleasures, though many of my friends might wonder at that description. My historical reading leans heavily toward war, revolution, conflict, crisis, dictatorship, oppression, mayhem, destruction, and chaos. The more bodies that have piled up in the course of the read, the more interesting I am likely to find the subject. Weird, perhaps, but true.

Over the last month, I’ve jumped into the book pile. I put away two books on North Korea and one on China, two of my major professional research areas. None of them qualify for pleasure. In the latter category, however, was Adam Hochschild’s King Leopold’s Ghost: A Story of Greed, Terror, and Heroism in Colonial Africa. It certainly was depressing, but it expanded my knowledge of a gruesome period of history, the brutal story of the Belgian Congo, about which I was vaguely familiar and already horrified. It is something about which any Westerner whose country acquired colonies should be familiar.

Another, even longer, book that I finished was A. Scott Berg’s Lindbergh. I knew the story in general, not detail. His family life was tough. A single flight made him one of the most famous people on the planet. That opened manifold opportunities for him but sacrificed his first-born son, who was kidnapped and murdered. Lindbergh went on to live a fascinating life, with one horrid misstep — not opposing entry into World War II but blaming Jewish-Americans for supporting U.S. participation in the conflict. He never would entirely live down that episode, but he did what he could for the war effort while barred by President Franklin Delano Roosevelt from actively serving (though he surreptitiously flew on combat missions in the Pacific). What I had not known was that in his later years he became an environmental activist and lived into a very different age, dying in 1974.

Now I am working on a detailed biography by Stephen F. Cohen, Bukharin and the Bolshevik Revolution: A Political Biography, 1888-1938. Bukharin was one of the revolutionary titans who favored the more market-oriented New Economic Policy. He was the last of the original Bolshevik leaders to go through a show trial and die at Joseph Stalin’s hands. The book offers plenty of insights into the Soviet Revolution and its aftermath.

I’ve also started Max Blumenthal’s The Management of Savagery: How America’s National Security State Fueled the Rise of Al Qaeda, ISIS, and Donald Trump. He’s a controversial writer but is willing to slaughter any and all sacred cows. Upcoming will be another China book — I have several in the pile. There are also a couple on World War I, which I view as the 20th century’s “original sin,” the fount of so many ensuing terrible events. Plus many more in my many “to read” piles.

I love writing. But reading a good book is salve for my soul. It’s been great returning to the real thing.

I recently reconnected with my “book club” luncheon mate. He had moved several times, and we had lost touch. But I shot a note to his old email address and voila! He lives on the West Coast and has retired young.

When I asked what he was up to, he responded that he spent much of his time “reading the million books I had to put aside.”

The more things change, the more they remain the same. Maybe I should consider retiring, too.

All good things come to an end, and I want to get back out on the road. As well as start seeing friends again.

But I’m going to make an extra effort to keep moving through the book pile. I’ve missed reading. Reconnecting with that love is a small but important benefit of the larger tragedy all around us.

Doug Bandow is a Senior Fellow at the Cato Institute. A former Special Assistant to President Ronald Reagan, he is author ofForeign Follies: America’s New Global Empire. He also is a graduate of Stanford Law School and a member of the California and D.C. bars.