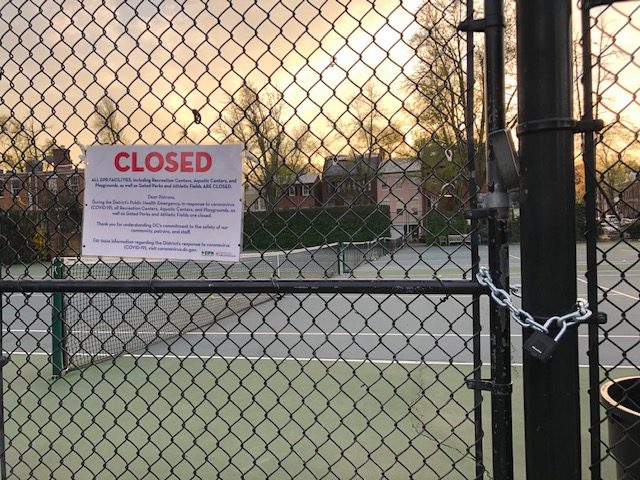 There is a plaque at the Rose Park courts, and there are some mighty fine players here, nationally and internationally ranked, and others improving daily. When play resumes, they will do very well for a day or two and then slide back as kinks reappear, until I stomp on them:

“You are choking. Hold the stick back, way back, even before you see the ball come off my frame, move those feet, and for pete’s sake the point of contact is in front of you, not in the fence.”

“Why Pete?” the young lady will say, because she is cheeky, not because she does not know the idiom. She won the 2019 most-improved prize, which I awarded despite possible conflict of interest (coaching), but there was no money involved, so I do not think this is indictable.

You mind that because the courts at Rose Park are thick with lawyers. Some show up at court even when it interferes with their match schedule.

R hits like an avenging prosecutor. He is retired Navy JAG and Democrat, albeit old-school. I want him to run for something so I can write speeches quoting Al Smith. In True Grit, Mattie Ross expresses support for Al Smith despite he is Catholic and wet, but that’s what remembering Thaddeus Stevens and his squad will do to a prim old Southern lady.

R is an old-salt, hard-nose power hitter, but he rushes the net on first serve, and I have figured out how to place the backhand return past him.

B, another lawyer, tougher than his slim frame suggests, uses cross-examination, a never-quit defensive game. His pal E, who plays classical flute patient and steady, counter-crosses until he can make the winning shot.

Initials only on these guys and dolls because, you know, the lawyers.

At Rose Park, M is the best. He is up there with our friend Taki when he played Davis Cup, but that was some years ago. Taki gave me excellent advice on the backhand, as did H, who is good enough for M. If you got, you want to give.

“Pete’s sake” here is a nod to Margaret and Matilda Roumania Peters, who lived across the street, next door to where Mr. Jeh Johnson (a lawyer) lives. They played with wooden frames and the surfaces were rough, but they were perfectly dressed in elegant white or pale blue or pink outfits.

They were the best girl players of their time. But they were born just about when Woodrow Wilson — “the greatest Presbyterian of the age,” thought Mattie — came to Washington and brought Jim Crow with him. Georgetown kept that bird off its streets, but the sisters, “Big Pete” and “Repeat,” were limited to the Negro Leagues, which in this sport was the American Tennis Association (ATA). They were invincible as a college doubles team out of Tuskegee and took turns topping the singles charts, but it took Althea Gibson — whom Roumania beat in 1946 for the ATA championship — to break the color line imposed by the USTA and its British and French counterparts and hoist the trophies of the sport’s major tournaments.

Mr. Johnson and the Friends of Rose Park civic organization put up a Peters Sisters plaque in 2015. They missed the big bucks era — Miss Althea was already fading when it began — and worked as teachers in the D.C. public schools. They were good schools then, because of women like these, and when the courts reopen we will study on being worthy of the gifts we receive. 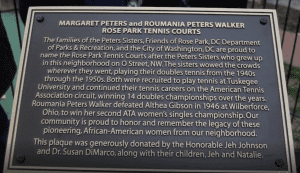