Another Perspective,Top Story Constitutionalism,John Selden,Left Intolerance Picking Up the Pieces - The American Spectator | USA News and Politics
Menu
Another Perspective
Picking Up the Pieces
America could move on, the way Europe did by ending the Thirty Years’ War.
by Shmuel Klatzkin
“Wallenstein: A Scene of the Thirty Years War,” Ernest Crofts (Wikimedia Commons) 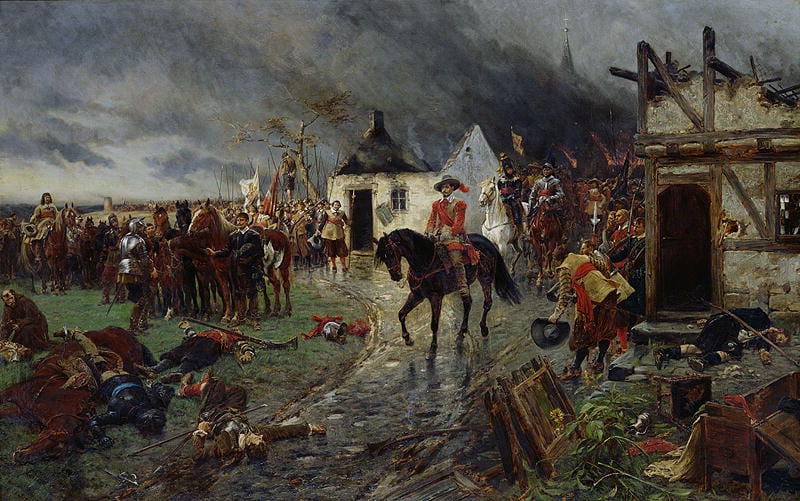 “You don’t know what you’ve got till it’s gone,” sang Joni Mitchell many a decade ago.

It’s a very old theme. We are barely two chapters into Genesis when the harmony and union of the Beginning is a thing of the past. Human life turns into a struggle to re-establish the oneness that once was there. And the only way that happens is through finding something greater than was there at first.

This foundation of freedom is our surest defense. It gives us the practical discernment to readily identify those who would exploit our freedoms so as to end them.

The 16th century saw the shattering of the religious unity of Christian Europe. Reformation and Counter-Reformation were not just cultured debates over doctrines, but parts of a traumatic shattering of a unified world. With no common ground, violence continued to break out, terrible and vengeful, the last and in some ways worst being the Thirty Years War, which caused the death of millions and exhausted most of the nations of Europe.

In order to end this war, some kind of common ground had to be established. But the great commonality of a shared religion was gone. The conflict had been at core a struggle over religion, which was not resolved.

But a solution emerged. Hugo Grotius, the person who shaped the eventual peace treaties (called as a whole the Peace of Westphalia), was a man of deep legal, political, and religious vision. He used the idea of “natural law” to shape arguments for social rule that all could be expected to obey, no matter what their religion. Scholars have since discovered that Grotius depended heavily on a concept of religious law underlying all Christendom, which could therefore unite Lutheran, Calvinist, and Catholic nations in a peaceful international legal order.

In his masterwork, The Laws of War and Peace, Grotius writes,

[Within ancient Israel] there always lived some Strangers … as is read in the Talmud … These, as the Hebrew Rabbis say, were obliged to keep the Precepts given to Adam and Noah … but not the Laws peculiar to the Israelites.

Here, Grotius tells us, there is a divine order that goes deeper than religious difference. There was no need to compel non-Israelites to obey laws binding only upon them. The basic laws that have been in existence since the beginning of humanity, called by the Rabbis the Seven Noahide Laws, provide an order that transcends all differences. Let each community, each nation have its sovereignty, its religious tradition, its laws. There is an order deeper than we had realized, in which even our own current and profound differences need no longer have us at war.

Grotius’ admirer, John Selden, followed his lead into the rabbinic texts that expounded this order. The student exceeded his master in his depth of knowledge of those sources. Most important is the use to which he put them, seeing in them not only a skeletal international constitution but also a methodology of inclusiveness.

The Talmudic method requires debate and passionate argument when needed. Rather than differences entailing exclusion, the Talmud accepted the emblematic teaching that “both these and these are the word of the living God,” and deserved study and respect. Once a matter had been put to the vote, the majority ruled and the law would follow them, but the dissents remained on the record to be studied and learned.

Selden tried to use these concepts to establish a working English constitution in which those at each other’s throats could each find their peaceful place — Episcopalians, Presbyterians, Dissenters, and Catholics, or king, lords, and commoners. He couldn’t halt the country’s plunge into civil war and a decade of military dictatorship. But not long after Selden’s death, the country joyously welcomed their king back “into his own.” But he was now king under a constitution, unable to defy Parliament. Religious toleration would take longer, but had already made a significant step forward with the readmission of Jews to England — after having been expelled three centuries earlier.

We can look at America’s current political and spiritual crisis through the same prism that Grotius and Selden used. The conflicts between the sides are disputed as if they reflect fundamental differences, religious in that the claims are taken as not subject to dispute or compromise. The path forward in such situations leads to ever-deepening conflict and ever less avoidance of violence.

The Declaration of Independence based our nationhood itself on such an unarguable plane. But instead of referencing a particular doctrine in its details, it instead claimed some a very few basic points as self-evident. By that, it also implies that beyond a few basic points, our differences must be capable of resolution through civil means.

It is instructive that the great war that sought to violently dissolve the American union was over the point that the Declaration proclaimed before all else as self-evident. And it is also instructive that while the current agitations are professedly about equality, equality has not been the matter contested, but rather the dictation of a narrow and violent conception of how equality is to be realized.

It is a sad fact that far too many of those who participate in the current unrest have little familiarity with such a shared perspective. I fear they do not know enough to look for it, for the marketplace is awash with petty pretenders. Marxist materialism, worship of race, social Darwinist worship of the fittest — all provide exclusive surface identities that violently exclude outsiders. Suppression of ideas is essential to their worship. Their concept of commonality is so fragile that it cannot be challenged, and so they go about the suppression of all thoughts outside their narrow focus with the same zeal as a Torquemada or an ISIS nouveau-caliph.

Selden saw the great constitutional tradition flowing like a river into many streams and channels that then flow back together again. The process of inclusion, to make an entire nation of disparate people able to work together and identify as one, was part of the universal project that flows through the Bible of uniting all humanity as one. Most of all, a true constitution preserves the liberty of each individual in relation to the source of his own consciousness, and allows no human agency to infringe upon it.

For the strength of the great tradition that flows through our American constitution is the freedoms it supports, which alone can produce a working unity that harnesses, develops, and includes the full range of the varied gifts with which God has blessed us as individuals, and by which the nation as a whole thrives and derives its strength. Free minds, nourished by speaking, sharing, and testing ideas, with the freedom to worship and commune from the core of mind and soul, are essential to the vitality of our nation. The resulting unity needs no violence or repression to shore it up, and sees the variety of human strengths as the force that enables our unity to be invincibly strong.

This foundation of freedom is our surest defense. It gives us the practical discernment to readily identify those who would exploit our freedoms so as to end them, and the ability to see through their deceptions and effectively thwart their intentions.

The practical provisions of basic morality in the Noahide Laws — the prohibitions against murder, stealing, incest, and cruelty to animals — are coupled with the command to set up a lawful order that takes into account the lively differences that humanity realizes in the laboratories of distinct and different nations and communities. Over all is a grand harmony, such as Selden envisioned, bringing peace to a Britain wracked by decades of civil unrest and war, and as Grotius saw, bringing peace to a Europe that was clawing itself to ruination and death for want of a sufficiently large and deep principle of unity.

It is incumbent upon us all to deepen our awareness of our American constitution and the underlying consciousness of oneness and unity from which it springs. We must acquaint ourselves with its history to realize its power, not just as an ivory-tower idea or a meditative will-o-the-wisp, but as the most powerful force for the good that has ever shaped human society in all its long history.

When we know it, we will find already present in our consciousness the power it will take to see our way forward, and to overcome every threat of tyranny we face, both now and in the future. Let us set ourselves to the sacred task of picking up the pieces of our broken unity and spread this consciousness in everything we do.