One consequence of the Republicans’ takeover of the House of Representatives is that congressmen like Budget Committee chairman Paul Ryan and Domestic Monetary Policy and Technology Subcommittee chairman Ron Paul are going to have many more chances to hold hearings on the Fed’s activity and grill Ben Bernanke.

Given Ryan’s and Paul’s views on QE2 and the Fed, what that will mean for now is that these hearings will be adversarial and they will try to prevail upon Bernanke to direct the Fed toward a less inflationary stance. David Leonhardt of the New York Times, though,  argues that fears about monetary policy being too expansionary right now may be misplaced:

Here is core inflation – economists’ preferred measure of inflation… – over the last 40 years: 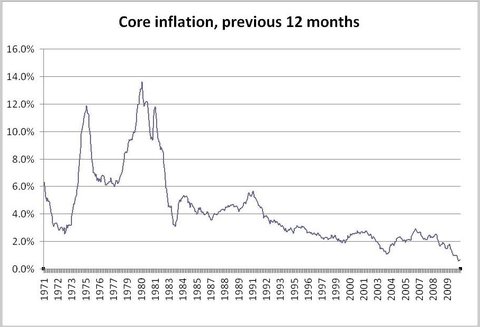 Does it look dangerously high?

Or might the slow pace of economic growth and the high level of unemployment be larger problems?

Leonhardt’s graph strengthens the case for expansionary monetary policy even without reference to growth and unemployment. Republicans, including Paul Ryan, have argued that the Fed should follow a single mandate. That is, they believe the Fed should focus on price stability alone, as opposed to both price stability and employment and economic growth. Focusing on price stability, though, would make the case for expansionary monetary policy stronger: as the graph above clearly shows, core inflation is well below the 2 percent target level, and has been trending downward for years now.

In other words, there are many good reasons to be skeptical of QE2, but the Republicans’ preferred guidelines suggest that the Fed’s stance should be relatively easy right now.