Conor McGregor and a pack of goons on Thursday attacked a bus transporting mixed-martial artists two days away from fighting at UFC 223. The Dubliner hurled a handtruck through one of the vehicle’s windows. Others in his group followed his lead and threw trash cans, barriers, and other objects at the vehicle as it attempted to exit Barclays Center.

yoooooo… first time seeing this one. Conor has legit lost his mind. pic.twitter.com/XcLFd2FIMo

Khabib Nurmagomedov, the target of McGregor’s attack, emerged not only unscathed but more popular than ever. Like Mike Tyson biting Evander Holyfield’s ear, the former UFC featherweight and lightweight champion’s barbarous behavior looked like a way to avoid a real fight with a dangerous opponent. 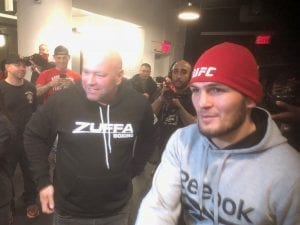 The Notorious, living up to his moniker, turned himself into the New York Police Department Thursday night. Charges, of the felony type that prevent foreigners from entering the country, loom. Perhaps a savvy defense attorney argues that McGregor took fight promotion too far.

UFC President Dana White, a friend and benefactor of McGregor, called it “the most disgusting thing that has ever happened in the history of the company.”

One wonders to what extent White’s repeated see-no-evil-hear-no-evil-speak-no-evil response to McGregor’s bad behavior—pushing a referee and slapping a commissioner at a bout in another promotion here, hitting a security guard with an energy-drink can at a press conference there—enabled the out-of-control fighter. McGregor put more cash in White’s pocket than any other athlete in UFC history. And both White and McGregor’s behavior—uncharacteristically meek in the former’s case, characteristically hubristic in the latter’s—indicated that they fully understood the ramifications of this. 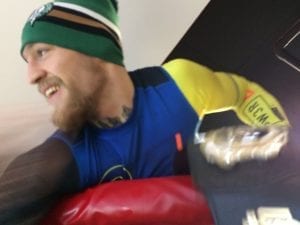 McGregor backed his talk up with his punches. He knocked out featherweight champion Jose Aldo in a few seconds, made lightweight champion Eddie Alvarez look like a boy fighting a man, and held his own for more than a few rounds in his crossover boxing match with Floyd Mayweather.

In speaking face-to-face with McGregor more than a half-dozen times, two sides of him become apparent: 1. He generously gives time to the media and always provides an A+ soundbite; 2. He is a bully. Kindness to the media and cruel narcissism do not, of course, conflict. 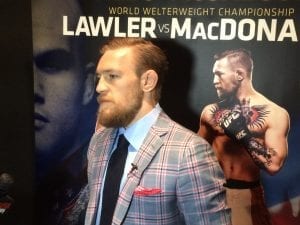 After McGregor defeated an outmatched Denis Siver in Boston in 2015, I asked him why he gave the finger to his opponent before the fight. He proceeded to bash the man he battered by bringing up an old positive test for performance enhancers. It all seemed pretty gratuitous. Two months later, I watched as he directed racist comments at Brazilian Jose Aldo. “What I really want to do is turn his favela into a Reebok sweatshop,” McGregor, referencing both the UFC’s deal with the sneaker company and Aldo’s poverty-stricken upbringing, said. “They work well over there.”

All the while, King Conor’s subjects laughed and cheered him on. Nobody laughs or cheers any longer.

I did the best I could with short amount of time given to me @ChuckMindenhall now where’d you put my beverage? pic.twitter.com/mJGI6RVv42

“I don’t know if he’s on drugs, or what his deal is,” UFC President Dana White reacted. “But to come and do this and to act like this — you’re talking about a guy who has a baby. He just had a kid. This is how you’re acting? You have a son at home.”

Cocaine, as the philosopher Rick James once pointed out, is a helluva drug. So is fame. So is a $100 million payday.