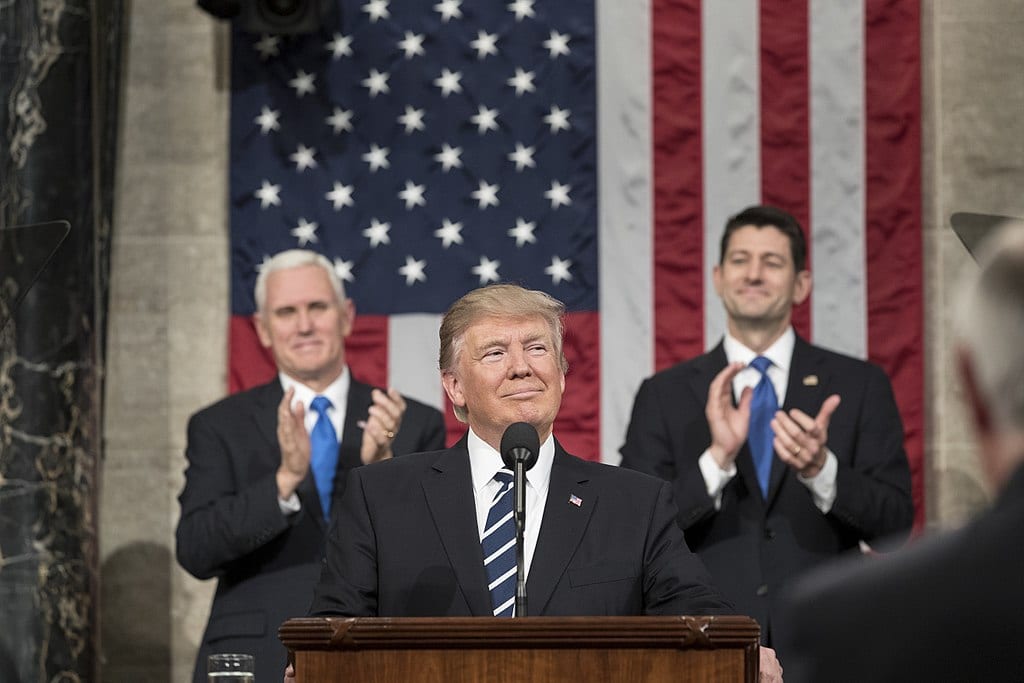 President Donald J. Trump doesn’t care about the nation’s debt, according to that paragon of truth known as the Daily Beast. The article in question claims that Trump’s view on the concern about the rising debt crisis was, “I won’t be here” when the whole thing comes crashing down. For the record, as with most of these reports, the claims are entirely unsourced. Yet, they do gel with other statements that supposed White House insiders have made about the president’s view on the national debt.

In his recent book, Fear: Trump in the White House, Bob Woodward describes a scene early in Trump’s presidency in which his then-senior economic adviser, Gary Cohn, met with Trump in the Oval Office. During that meeting, Trump insisted that the Federal Reserve should print more money to offset America’s onerous debt problem. Cohn shot the president down, according to Woodward (for his part, Trump denies everything in the book).

Even if it were true, that shouldn’t matter. The president does not control the country’s purse strings: Congress does… and that should frighten you.

Fact is, the president has attempted to mitigate the debt crisis. He did campaign on the issue. Though, to be fair, he was not anywhere near as vocal on the matter as other Republicans have been (many of those Republicans previously campaigned on this issue in order to win their congressional seats and then never address the matter until the next election cycle, when they need votes and talking points).

In fact, Trump campaigned not as an austerity man but as a man who could better manage America’s massive welfare state (which accounts for the overwhelming majority of America’s debt) and he vowed to increase the already-massive defense budget. Those who expected Trump, who in another life was proud to be called the “King of Debt,” to be a man of austerity did not understand either what Trump was saying on the campaign trail or what the 62 million Americans who voted for him in 2016 wanted.

Still, as even the recent Daily Beast article concedes, in the words of presidential spokeswoman, Hogan Gidley, the president has taken action to reduce some of the debt load in the country “including in [Trump’s] first budget that actually would’ve balanced [the budget] in 10 years, a historic, common-sense rescissions proposal.”

Naturally, this was but a start. And, by the time the proposal worked its way through the Republican-controlled Congress earlier this year, between the tax cuts last year and the $1.3 trillion spending bill passed this year, the deficit was blown up again and the debt was massively expanded. When Trump leaves office, there is set to be a “hockey stick”-like increase in the national debt that could trigger the collapse of the American economic system.

Think about this, though: if Congress ultimately controls the purse strings, and the debt has been piling up since the Reagan years, how is this all of a sudden Trump’s problem? If Congress has been talking about this matter since the 1980s, why hasn’t it formulated the necessary legislation for reining in government spending?

In fact, in the hyper-partisan corridors of power, in which Democrats and Republicans routinely squabble over everything they can, the one area of bipartisan consensus appears to be on the matter of government spending: both parties always spend more of our money whenever they can. It doesn’t matter whether the Ayn Rand-worshiping “ONE TRUE CONSERVATIVE” Paul Ryan is Speaker of the House or Nancy Pelosi is running things.

Government will continue to spend money it doesn’t have on programs that the country may not necessarily need. If the country does need such expensive programs, rather than take the politically riskier path of responsibility (raising taxes, as George H.W. Bush was forced to do during his single term in office), then Congress will continue putting things on the credit card, expecting that my generation and future ones will pay for these policies (which, of course, we can’t — no generation ever could).

Presidential economic advisers, such as Stephen Moore and Larry Kudlow, acknowledge that the debt is a real problem for the United States. Yet, they (like Trump), believe that the country can outgrow its debt. But, even at four percent GDP growth, the country cannot grow its way out of this level of debt (which is expected to be 107.7 percent of GDP in 2018) — and maintaining four percent GDP growth (or higher) in an advanced economy like United States is by no means a fait accompli (even China, with its historically high GDP rate is starting to slow down).

Given America’s declining fertility rates; its high cost of living; and other factors that contribute or weaken long-term economic growth, it is unlikely that such levels can be sustained. That is, unless the United States is home to an economic revolution of the kind that the cotton gin, the automobile, and computers provided previously. Even then, the kind of debt load that America now possesses will make outgrowing the current debt nearly impossible — not without tax increases (which neither I nor anyone else really wants).

Until the next great economic revolution occurs in this country that truly spurs astronomical economic growth as the industrial and computing revolutions previously did, we will be forced to hew to classical economic logic that’s long been abandoned by successive Congresses: don’t spend more money than you make and always save for a rainy day.

Unfortunately, the president doesn’t control these things. He can demand for Congress to take certain actions (and, as noted above, has) but he’s not the decider here. Congress is the only entity that can really change things for the better and Congress only takes action when its members are consistently threatened by the loss of votes or campaign money in an election year. Since the 1980s, the American voters have not held their elected representatives and senators accountable enough to warrant the kind of drastic legislative change needed to tamp down on America’s debt problem.

If you want to cut down on the debt, force Congress to do its job by voting the bums out and making The Swamp’s life miserable until they do what you want them to do. Otherwise, get ready for an implosion very soon.