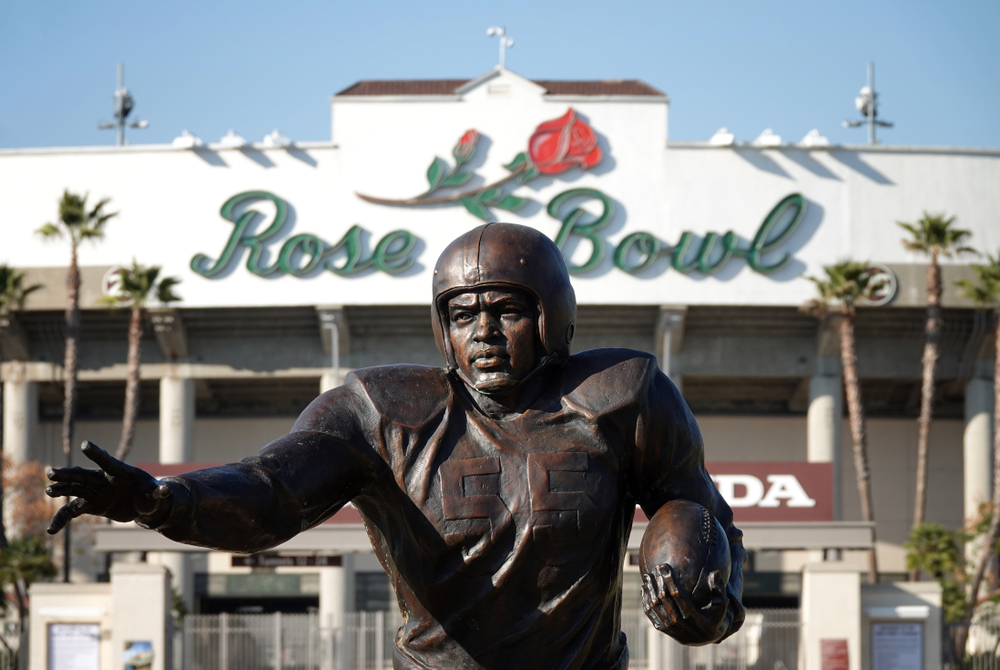 Everybody’s waiting for the other shoe to drop in the conference realignment chaos that is major college football.

The first shoe was a doozy. It left a Godzilla-size footprint on the landscape. If it was a carbon footprint, it would be Al Gore’s mansion with all the lights turned on, or Barack Obama’s enlisting a private jet, 14 different cars, and a helicopter to give a speech on climate change. Think of the monthly electric bill of all of China.

That’s how huge USC and UCLA going to the Big Ten is. Or yuge, as a certain ex- and possibly future president would say.

This turns the college football landscape on its side. It sets up the Big Ten as the country’s first national conference, spreading from coast to coast. It answers the SEC expansion plans and further separates the haves from the have-nots. It proclaims the arrival of the era of the superconference.

Didn’t see it coming, did you? Unlike the normal procedure in the conference realignment game, the story was not floated by an insider journalist into that limbo between legit leak and clickbait territory, where it would enjoy a happy and breathless, albeit momentary, life on social media while athletic directors and assorted officials play coy for a week or two before the story dies of entropy.

The Big Ten conference will expand to 16 teams beginning in the 2024 season. It will admit the Pac-12’s two Los Angeles–area schools, USC and UCLA. It wants to play with the big dog.

No. This one was on us literally overnight. One minute we’re seeing Nick Saban and Jimbo Fisher make nice after their dustup in May and wondering if Arch Manning’s commitment to Texas will turn the ’Horns right-side up finally, and, voila, the next minute we’re envisioning USC Trojans stomping their feet and blowing into their hands on the sidelines of a late November Saturday in East Lansing. We’re wondering how happy the UCLA Bruins will be about that 9 a.m. body-clock kickoff in Piscataway, New Jersey.

When college football’s big-dog conference, the SEC, added to its already impressive lineup two of the top five programs in all of college football last summer — Oklahoma and Texas — it threw down a gauntlet to the Big Ten. Would the nation’s most historic conference — also its most hoity-toity — pull on its big-boy football pants or retreat to its parochial superiority and bask in its storied past and academic tradition?

We got our answer late last week. The Big Ten conference will expand to 16 teams beginning in the 2024 season. It will admit the Pac-12’s two Los Angeles–area schools, USC and UCLA. It wants to play with the big dog.

It’s about money for the West Coast schools, no question. The Pac-12 has an archaic TV deal. Pac teams received only $33.6 million each in 2019 from media rights, while Big Ten schools averaged $49.2 that year, with the 12 longest-tenured members receiving on average $54.3 million. That $20 million difference continued into 2020. COVID brought the numbers down the next year — Pac, $19.8 million to each school; Big Ten, $47.8 million to each school.

The Big Ten’s new media-rights deal that begins in 2024 could hit the $1 billion-per-year mark — a figure estimated before the LA schools inserted into the equation the second-largest media market in the nation. The number being thrown around now is $100 million distributed to each Big Ten school. That could be twice what Pac teams bring in.

The coastal league has other problems as well. It has been, for the past few decades, a national afterthought in football — a league out of sight, because of late-night starting times on the East Coast, and out of mind, because of mediocrity on the playing field (last national championship, 2004). Of the 32 teams selected to play in the eight years of the present playoff structure, only two have been from the Pac-12. Its tepid, downright wimpy COVID season — way late in the season, it was shamed into mounting a football campaign, with no fans, and, for some schools, only four games, all because of fear of the ’rona — made it apparent to all that football was not a priority on the Left Coast. A conference championship game nobody attends and the fact that interest in high school football is waning on the West Coast more than elsewhere, which hurts recruiting, round out the “issues” for the conference.

The move will come at a cost, however. One result is that the quondam Pac-12, soon to be Pac-10, will likely become the Pac-Irrelevant, or, worst case, the Pac-Nonexistent. Removing USC from the Pac pretty much dissolves the Pac. Without the Southern California schools, especially USC, the Pac-12 loses its raison d’être. It could limp along with 10 — if everybody stays (some Pac-12 schools are reportedly talking about a merger with the Big 12) — or add a couple of geographically proximate schools. But 10 schools without its lodestar (USC) or adding the likes of San Diego State or Fresno State to bring the number back to 12 seems weak sauce for the soi-disant “Conference of Champions.”

As for the Big Ten, it has climbed down from its lofty throne. As Tom Shatel wrote in the Omaha World-Herald: “I’ve long said that while the Southeastern Conference wanted to be No. 1, the Big Ten wanted to be the Big Ten. Lost in its fight songs and rivalry trophies and Rose Bowl allegiance. The Big Ten was different from the other conferences and reveled in that with more than a touch of arrogance.”

No more parochial conference existed in American college sports. Fans in the footprint states cared more for Purdue-Illinois than for Alabama-Auburn. Legendary Michigan coach Bo Schembechler once claimed he skipped the 2002 Rose Bowl between Miami and Nebraska (then a member of the Big 12). “I protested it,” he said. “When there’s no Big Ten team in it, I’m not watching it.”

Well, the conference has joined the real world, finally, lusting after relevance on the playing field. It has burst from its farmland enclave to embrace colleges in the two largest media markets in the nation on the coasts — New York and Los Angeles — and the third- and fourth-largest in between (Chicago and Philadelphia, respectively). Its signature bowl game, the “granddaddy” of all bowl games, is occasionally played with no conference representative. Road trips for some conference schools will be 2,700-mile affairs.

Any Big Ten traditionalists still remaining in the salons of Ann Arbor and Madison are squirming in their chairs like liberals forced to listen to Sousa marches.

Now, about that other shoe. Or, rather, multiple shoes. We could be talking an Imelda Marcos closet of shoes dropping before this is over.

Most everybody is waiting on Notre Dame. Which most everybody has been doing for quite a while — at least since the 1990s, when Big Ten commissioner Jim Delaney started courting the school in earnest. They do like attention, being the belle of the ball. This is the school that was too good for bowl games for 40 years in the mid-20th century, if you recall — such contests would take their student-athletes away from studying for finals! And they have defied all the rules of common sense that encourage a Big Ten alliance — retaining geographical proximity with their conference mates and maintaining their historic rivalries: Michigan, Michigan State, Purdue, and now USC.

Their joining the Big Ten would require an entry mate — Stanford, maybe, or Oregon or Washington. Maybe the Big Ten goes large, to 20, and adds all four. Maybe uber-large, inviting North Carolina and Virginia as well.

The Big Ten’s next move will doubtless invite a return salvo from the SEC. They could add four southern powers — Clemson, Miami, Florida State, North Carolina.

You see how this goes. It’s fun, for spectators and pundits and talk-show hosts, but not so much for the schools left out — those in the Big 12 and Atlantic Coast Conference and Pac-12.

What we’re looking at is superconferences, probably two but maybe three or even four. Maybe the SEC and Big Ten end up with 24 schools each. Maybe they break away from the NCAA and do their own thing. Maybe Notre Dame joins the SEC and throws everything out of whack. Who knows, really.

But, according to many, any further action will start in South Bend, Indiana. The Irish are the key. After they decide, the dominoes will fall fast and furious.