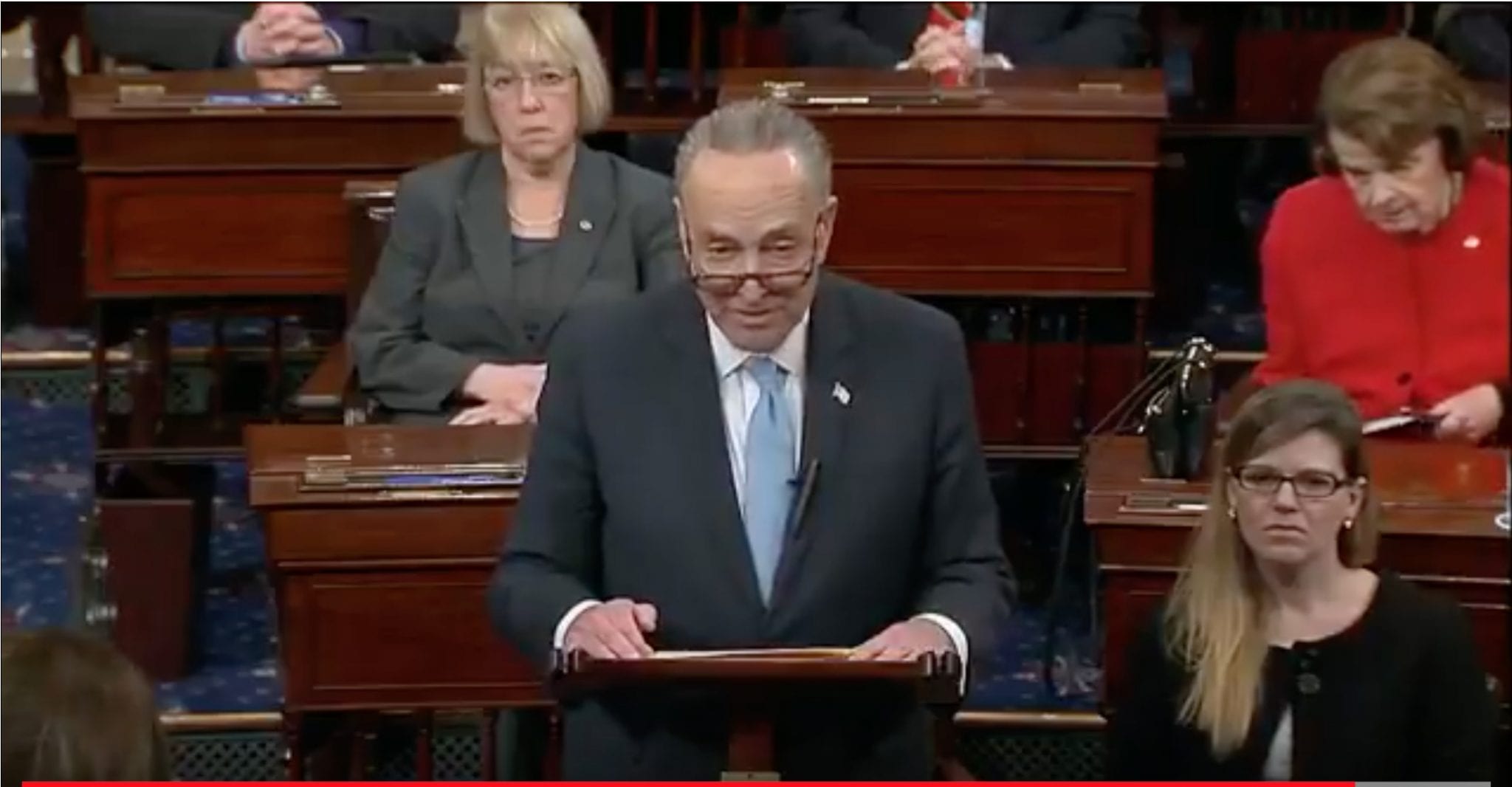 Monday morning, after bragging about what fighters they were in forcing the federal government into shutdown mode over their demands for amnesty for illegal immigrants brought to America as children, Senate Democrats meekly gave in and voted for a short-term federal budget deal.

And the left wing of the Democrat Party is not happy about it.

The predicate of the “compromise” Minority Leader Chuck Schumer announced was that Schumer would be guaranteed a vote on a “clean” bill giving congressional authorization to the Obama administration’s DACA, the program protecting the children of illegal immigrants from deportation, by Feb. 8 in return for the end of a Senate filibuster of a temporary funding measure that keeps the government open. Or put more specifically, either there would be a deal on immigration struck by that date or else DACA would get an up-or-down Senate vote.

That’s the offer Senate Majority Leader Mitch McConnell made to Schumer, and it’s a bit flimsy, frankly. McConnell can’t control whether an immigration deal is made, and he also can’t keep Senate Republicans from filibustering a “clean” DACA vote. Nor can he control what the House might do.

Considering that the Democrats attempted to shut down the government over a demand for amnesty for illegals brought here as kids, it sure seems like the shutdown ended in a whimper.

And the Democrats’ base is not happy about it. Including some of the party’s likely 2020 presidential candidates. Take left-wing loon and California Senator Kamala Harris, for example, who said, “I don’t believe he made any commitment whatsoever and I think it would be foolhardy to believe he made a commitment.”

And then there is CREDO Action, the left-wing community organizing outfit, which declared a jihad against Schumer…

“It’s official: Chuck Schumer is the worst negotiator in Washington — even worse than Trump,” CREDO Political Director Murshed Zaheed said. “Any plan to protect Dreamers that relies on the word of serial liars like Mitch McConnell, Paul Ryan or Donald Trump is doomed to fail,” Zaheed said. “The fact is, Republicans do not want to protect Dreamers, and they won’t do it unless Democrats force their hand by insisting that a clean DREAM Act is attached to a must-pass spending bill,” Zaheed continued, adding, “in getting outmaneuvered by Sen. McConnell today, Chuck Schumer has failed dreamers and let the entire Democratic Party down.”

MoveOn.org wasn’t any more complimentary of Schumer, either.

How come the Left is so outraged against the Democrats’ leadership over an end to the government shutdown? And perhaps a better question is what Schumer and the establishment types might have to say to their unhinged firebrands about getting dragged into the shutdown fight to begin with.

After all, here’s what this fight has produced…

A huge messaging win for Trump and the GOP — The RNC termed this the Schumer Shutdown last week, which was a catchy phrase and a decent description of what was taking place. The Democrats were always going to have trouble explaining why DACA was a hill to die on in a shutdown fight — especially when the counter to their messaging was going to be that they’re prioritizing the wants of illegal aliens over the needs of American citizens.

You can bet somebody in the DNC or the party’s political guru class did some flash polling over the weekend and sounded the alarm bells to the tune of “this will be a political nightmare if it continues,” and that’s why the shutdown went away quickly for so small a price as McConnell paid.

Not to mention that for all his faults Donald Trump is the first Republican since Ronald Reagan, and perhaps even before Reagan, who’s capable of taking a messaging advantage and ramming it down a political opponent’s throat. Giving him a tool like a government shutdown he can sell on the basis that to Democrats illegals are more important than children’s health care or national defense is like chumming the waters you’re swimming in with a school of great white sharks around — you’re going to get bitten.

A total capitulation by Schumer to McConnell — The Democrats know that Schumer got nothing out of his party’s filibuster of the spending bill. Whatever “deal” the Republicans make with him on DACA and the immigration question will depend on what can pass the House, and that’s going to require a move toward a merit-based immigration system and an end to chain migration; in other words, a complete course change from the disastrous 1965 immigration reform bill which saddled the country with a large number of unskilled and difficult-to-assimilate immigrants from Third World nations. Anything short of that, which the Dems will struggle to accept even as the price for giving amnesty to the Dreamers, and not only will the House not pass it but President Trump would likely veto it.

And without the House, any up-or-down Senate vote on DACA is meaningless.

The Democrats know this, which is why they’re bemoaning the end of the shutdown under these terms.

Now we know the Democrats will hurt American interests if they think it’ll help them politically — Conservatives have long thought this about Democrats, but it’s harder to dismiss now. After all, if the DACA fight was such an unbendable matter of principle to the Democrats you’d have had a lot more than 18 of them voting against the resolution in the Senate to reopen the government on Monday.

This was always about politics, because polls showed that Republicans would be hurt more than Democrats politically in the event of a government shutdown. Except that those polls were on the generic question; in the specific case of a shutdown in order to benefit illegal aliens, let’s just say the numbers were more mixed. Ergo, no more shutdown.

At least in the case of the 2013 shutdown, which went on for two weeks and was billed as some uber-calamity for Republican interests in the 2014 midterms, for which Ted Cruz was blamed as the leader of the shutdown proponents, there was a legitimate, clearly understood principle underlying the fight. But here? As soon as the polling numbers went south Schumer and the gang threw in the towel. Some principle.

The lesson from this is the Democrats have a low tolerance for pain, because all of this is petty politics aimed at winning a news cycle. And if Trump is paying attention now he knows he can push them on that weakness to get whatever concessions he wants.

The coming morale crisis among the Democrat base — Welcome to the opposition, Democrats! During the eight years of the Obama presidency, the Left in America took great joy in watching Republicans on Capitol Hill make excuses for their inability to fulfill core policy aims like repealing Obamacare or deficit reduction. First it was not having control of the House that got in the way, then, after the House majority was retaken, it was the Senate. Then it had to be the White House.

Along the way, lots of Republican voters lost faith in their elected representatives over a perceived lack of ability to gain any real ground. Some of that perception was legitimate, some of it wasn’t.

But ever since the Democrats began talking of retaking a majority in the House this fall, a boastful claim buoyed by generic poll results and presidential approval ratings far out from any actual elections (not to mention a host of retirements by Republican House members many of whom aren’t overly personally popular in their mostly-red districts), many on the Left have begun counting chickens before the hatching. And what the shutdown fizzle shows those folks is something conservatives realized for eight years of Obama — namely, electing these people doesn’t make your dreams come true, and very often you get to own the same problems you blamed the other party for.

Chuck Schumer can’t legalize all the Dreamers no matter how hard he stamps his feet. Not without the House and the White House agreeing with him. So how does he placate the people he promised those results to last week?

Here’s how: he blames it on Trump. “The bipartisan group, in a very fine way, filled the glaring absence of the president in these talks” to negotiate a deal to reopen the government, he said Monday. Somehow the president is to blame for Schumer’s shutdown not going the way Schumer wanted, when Trump said all along he rejected tying DACA to a funding bill.

Schumer now has the same problem with the Hard Left that John Boehner and McConnell have had with conservatives; namely, that they now realize he can’t muscle his way to policy utopia through force of will, and that any promises along those lines he makes are lies. And now that he’s beaten bloody over the government shutdown, those voters his party will depend on turning out in droves this November will be asking whether his leadership is worth voting for.

It’s a disaster, and it was eminently foreseeable. The fun part of all this is it was the Left who pushed Schumer into the untenable position they’re screaming at him for extricating himself from. For the rest of us, at least until this fight comes back on the card in three weeks, watching the wreckage will make for great entertainment.

Scott McKay
Follow Their Stories:
View More
Scott McKay is publisher of the Hayride, which offers news and commentary on Louisiana and national politics. He’s also a writer of fiction — check out his three Tales of Ardenia novels Animus, Perdition and Retribution at Amazon. Scott's other project is The Speakeasy, a free-speech social and news app with benefits - check it out here.
Most Popular
1
The Right Prescription
Jan. 6: Seven Democrat Lies
by David Catron