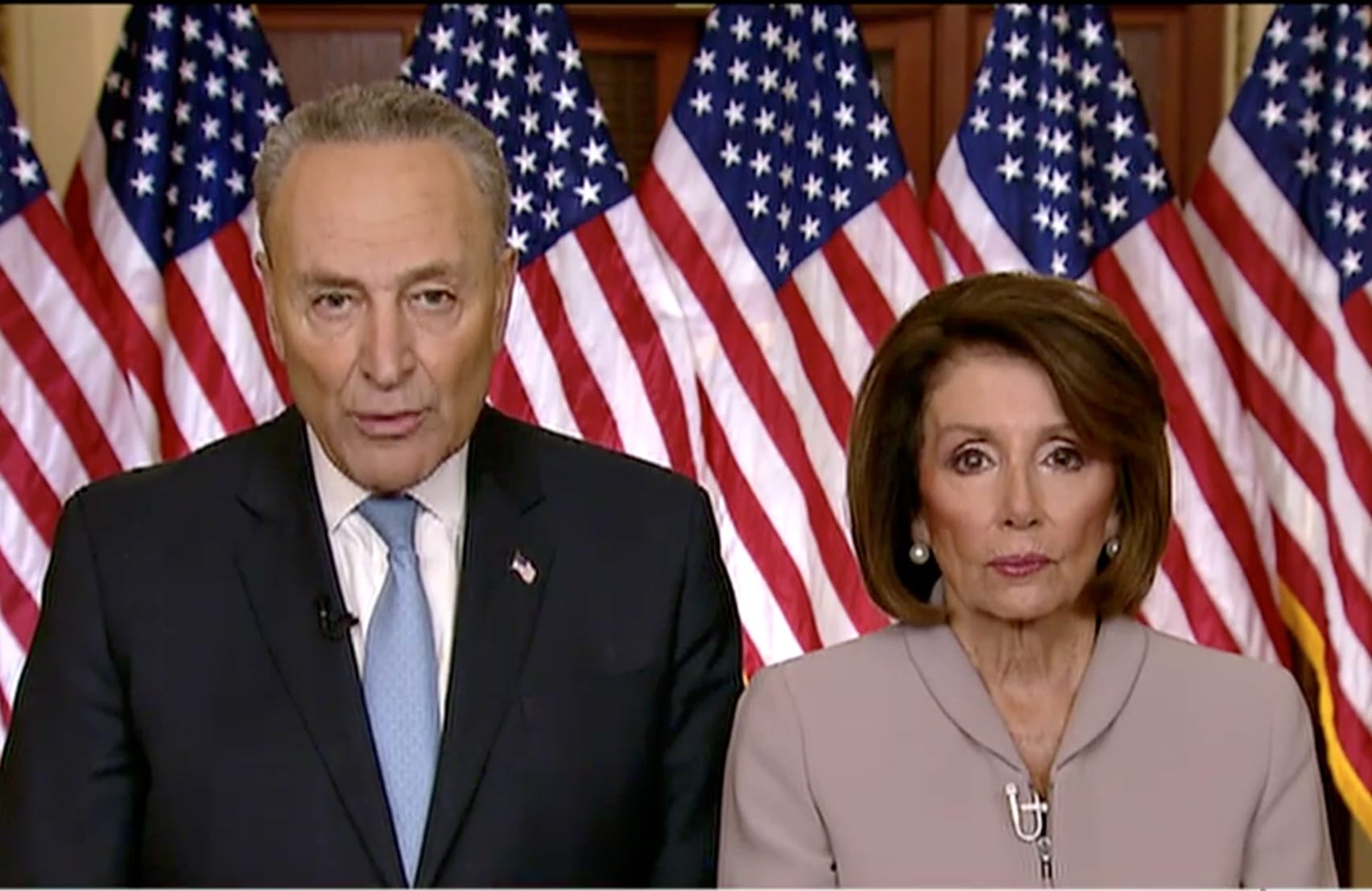 I must admit that I didn’t see Tuesday’s political histrionics from Washington in real time, as life intervened (I was at a college basketball game watching Alabama lose YET AGAIN), so I had to play a bit of catchup late last night and throughout the day.

But the exchange between President Trump and his would-be tormentors Chuck Schumer and Nancy Pelosi amid the current government shutdown appears to have been pretty laughably one-sided. It doesn’t take a partisan Republican to see that.

The President didn’t yell or scream, he didn’t throw any bombs, and he didn’t come off as the same guy he does on Twitter. What he did was to state a pretty cogent case for why the situation at the U.S.-Mexico border is untenable, and why something needs to be done to put a cork in the sex and drug trafficking, and mass illegal immigration, flowing across it.

For Trump, that means constructing a physical barrier along that border where it’s been suggested such a project be completed. This is anything but a new idea, mind you — it’s already been authorized by Congress. Remember the Secure Fence Act of 2006, which was part of the Bush-era push to do something about illegal immigration? Back then conservatives were furious at the Republican Party for its insistence on giving the Democrats a free path to millions of captive voters via amnesty for illegals, but the real travesty was that the Secure Fence Act passed with overwhelming support — 283-138 in the House, including 64 Democrats, and with 80 votes in the Senate including that of one Chuck Schumer — and of the 800-plus miles of physical barrier on the border it authorized only 589 of them were actually constructed before the Obama administration flouted a Congressional authorization and stopped the project.

And the Democrats have fought fiscal appropriations to construct that physical barrier ever since. Republicans couldn’t get it done when Barack Obama was in the White House, and now they can’t get it done so long as Schumer has 40 votes in the Senate to block the appropriation.

Which is why there’s a government shutdown with no end in sight.

And the Democrats’ pals in the mainstream media are doing everything they can to help Chuck and Nancy, who couldn’t seem to help themselves Tuesday night given the creepy optics of their wide-eyed American Gothic presentation, win the messaging war. Except I’m not sure the talking heads are helping. When Slate runs a post claiming Trump’s speech was too effective and openly suggests the networks censor the president, and when CNN is suggesting that he be carried on a tape-delayed basis so they can edit his words to splice in their own narratives, that’s a bit of an admission Trump is winning the argument.

Of course he’s winning the argument. How could he not? What is this argument over? It’s a partial government shutdown which affects the lives mostly of Democrats who work for the government, because of a Democrat refusal to appropriate less than $6 billion in a $4 trillion federal budget for a physical barrier to protect the border from sex and drug traffickers, terrorists, and trespassers many of whom are violent criminals.

By any objective judgment this shutdown is a complete loser for the Democrats over the long term — especially as it’s the first item of business for them upon taking over the House majority. It makes Pelosi and her leadership team look utterly incapable of governance, an impression which is not diminished when the most prominent new members of their caucus are the comically stupid Alexandria Ocasio-Cortez and the frightening anti-Americans Ilhan Omar and Rashida Tlaib, the latter of newfound “Impeach the motherf**ker!” fame.

Trump held a meeting with Chuck and Nancy Wednesday. It didn’t last long. As soon as it ended the President took to Twitter to give a recap: “Just left a meeting with Chuck and Nancy, a total waste of time. I asked what is going to happen in 30 days if I quickly open things up, are you going to approve Border Security which includes a Wall or Steel Barrier? Nancy said, NO. I said bye-bye, nothing else works!”

There’s an old adage applicable here, which is the party at the negotiation who can most easily get up from the table is usually the one who wins. That party is clearly Trump. His argument is not only the clearer one, it’s also a core argument which got him elected — it’s a key pillar of sovereignty that a nation must control its borders, there are crucial, fundamental issues of national security being unaddressed by current federal policy, and it’s the president’s job to bring that chaos under control. And for him to begin effectively doing so will cost far less than the foreign aid budgeted for the countries from which the problem chiefly comes.

And if the Democrats continue to resist there will be federal employees, most of whom are Democrats, whose paychecks are delayed. Who besides those federal employees actually cares about the shutdown? Almost nobody. In fact, there are lots of Americans who remember the eight years Obama was in office, in which the richest counties in America were mostly the D.C. suburbs where those federal employees live — while the rest of the country wallowed in the worst “economic recovery” America has ever seen. Sympathy is going to be in short supply.

And if this shutdown stretches even longer, its relative political effects could become even more lopsided. By the end of February the shutdown might just begin interfering with food stamps — and which party do you think will be under more pressure over that possibility?

Again, Trump is the guy who can walk away from the table. Most of his supporters are happy to stick with him amid the shutdown fight, and border security is a 70-30 issue in his favor. Chuck and Nancy might have the media on their side, but unlike the previous Bush-era iteration of the Republican Party this time there isn’t an irrational fear of bad press coverage on Trump’s part — by now he expects universally bad notices and knows those won’t kill him.

The whole thing is plainly, egregiously stupid on Chuck and Nancy’s part. It’s a massive own goal. As we said in this space two weeks ago, if the Democrats weren’t fools they’d have given Trump his appropriation for the wall with a big show of how they’re reasonable and responsible, and willing to work with the president, and then spent the next two years messaging about what an ineffective boondoggle it is. Now, every time there’s a terrible incident involving an illegal alien — like the atrocious case of California police Cpl. Ronil Singh, slaughtered by a Mexican gangster and multiple deportee named Gustavo Perez Arriaga — the country is going to blame Chuck, Nancy, and the Democrats for blocking construction of the wall.

Trump sees this, if Chuck and Nancy can’t. That’s why he’s happy to ride this storm out. Increasingly, they won’t be.

As for the rest of us, we’ll just enjoy the show.