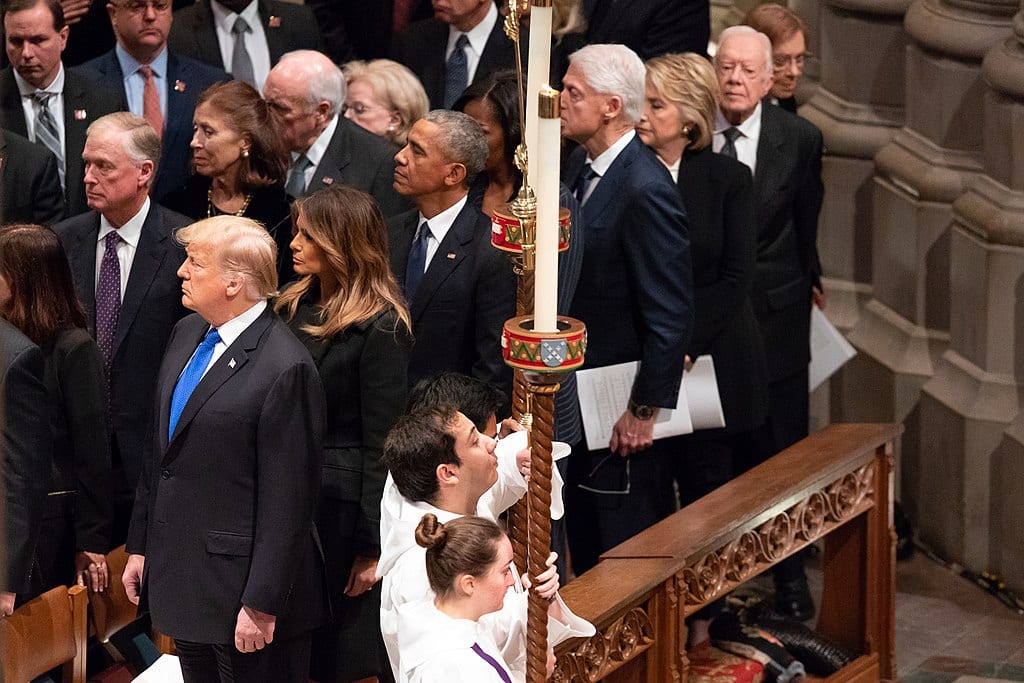 Who will speak for President Donald Trump at his state funeral, far in the future though it should be? That must be what the 45th president was thinking as he sat in the front pew at the funeral for former President George H.W. Bush.

Is there a scribe who will praise Trump for his leadership and his rhetoric?

Here’s a hint. In January, Tony Schwartz, who co-wrote, Trump: The Art of the Deal, wrote in the Guardian that the 45th president is “significantly angrier today: more reactive, deceitful, distracted, vindictive, impulsive and, above all, self-absorbed” than when Schwartz worked on the 1987 book.

A world leader? Well, Trump has developed warm relations with tyrants like Russian President Vladimir Putin, North Korean chairman Kim Jong Un and Saudi Crown Prince Mohammed bin Salman, so there are some strongmen who might want to speak for Trump. But after Trump’s taunts to NATO, it is hard to imagine the leader of a long-term ally who will look back fondly on Trump’s tenure.

Is there a political colleague who would say, as Simpson said of Bush, that the late president was a true friend, who stood by him in tough times, and whom “you would’ve wanted on your side”?

Consider the fate of former Attorney General Jeff Sessions, whom Trump fired after the midterm elections. Trump never forgave Sessions, the first senator to endorse Trump in the 2016 primary, for recusing himself from the Russian probe. Sessions learned the hard way that loyalty is a one-way street in Trump world.

So scratch public figures with solid reputations. At best, Trump probably could rely on praise mainly from political hit men, who hitched a ride with the only Republican who would let them near 1600 Pennsylvania Ave.

At least Trump can count on one of his sons to speak highly of him. Donald Jr. and Eric clearly are attached to their father. Ditto daughters Ivanka and Tiffany. (We’ll leave Barron out of this discussion, as he is a minor.) But it is hard to imagine any of Trump’s children extolling his kindnesses to strangers, even political foes.

The Bush family showed kindness toward Trump who had ridiculed “low energy” Jeb Bush during the 2016 GOP primary, trashed Dubya for the Iraq war and even mocked Bush 41’s signature “thousand points of light,” telling a rally this summer that he prefers “Make America Great Again.”

This kindness was much more powerful than the snub of Trump and pointed barbs directed at him at the memorial service for Sen. John McCain in September. The McCain clan let it be known Trump was not welcome at the National Cathedral service. McCain’s eulogizers used the occasion to disparage Trump — without naming him — as a small soul dwarfed by the legendary Vietnam POW. When it was over, both sides were further entrenched in their contempt for the other, and no one looked the better for it.

The National Cathedral send-off for the elder Bush showed Trump what can be — as the Bushes offered Trump a place in the community of presidents.

Bill and Hillary Clinton might greet him with cold stares, but like the Bushes, Barack and Michelle Obama understand the value of civility.

Bush 41 famously befriended Bill Clinton, the Democrat who defeated him in 1992. In the traditional letter to his successor, the vanquished Bush told Clinton, “Your success is now our country’s success. I am rooting hard for you. Good luck.” Bush put the country before his ego.

Yes. I know, the hard-core Trump base loves the fact that Trump is a fighter, not a gracious loser. But there are plenty of Republicans who miss the days when something as human as a funeral was above politics.